The 2019/2020 NFL Season is almost upon us and after months of waiting, NFL betting enthusiasts finally have the opportunity to place some season-long wagers. Caution needs to be taken when considering ante-post NFL bets, with season-defining injuries – or shock retirements in the case of the Indianapolis Colts – potentially derailing an organisations season before it even begins which needs to be taken into account when compiling your NFL betting strategy.

Nonetheless, there is some interesting value available across the top NFL betting sites as we await kick-off at Soldier Field on Thursday, September 6th when the Chicago Bears will host the Green Bay Packers. And it’s last year’s NFC North champions where we will start proceedings.

Rookie Running-Back in an Ideal Situation

One of the most scrutinised markets will be the Rookie Of The Year betting, where all eyes will be focused on the Arizona Cardinals No.1 pick, quarterback Kyler Murray. The Oklahoma grad has the world of expectations resting on his shoulders as he teams up with the new coach Kliff Kingsbury and his ‘air-raid offense’.

Murray heads the ROTY betting at 7/4, and rightly so. He’s an extremely talented and exciting players who should be a perfect match for Kingsbury’s intended scheme, but it could all go sour very quickly and at such a short price, there is better value elsewhere.

The transition from college to the NFL rarely bodes well for rookie QBs and while Murray should improve what was the leagues worst offense last year, he will be under severe media scrutiny where only exceptional performance could win him the award. After all Baker Mayfield - who only played 12 games - broke the record for rookie QB touchdowns last year with 27 and was still overlooked in favour of Saquon Barkley.

Two running-backs enter the season primed for major roles. Alabama product Josh Jacobs, 15/2 with Boylesports, was a first-round pick for the Raiders. Meanwhile, the Bears traded up in the draft to secure the services of David Montgomery who comes in at 12/1 with 888Sport – an extremely enticing price for a talented back who should be given mountains of opportunity.

Montgomery, who Bears coaching staff have been raving about, will fill the void left by Jordan Howard who leaves behind 250+ touches. Out of every player in this year’s draft class, he forced the most missed tackle per touch in his college career, breaking records for the statistic in the process with 104 in one year. Montgomery will also provide a far bigger threat in the receiving game, although that role has been largely cemented by Tarik Cohen. However, coach Matt Nagy is keen to limit the ‘Human Joystick’s’ touches this year, and it’s Montgomery who should benefit.

The Bears are a side who will have plenty of the ball thanks to their stellar defense, and they will be hoping to lead early. Montgomery should find red zone opportunities plentiful, and it’s not beyond the realm of possibility he will have double-digit touchdowns on the year. If he can add 1300+ yards from scrimmage to that, he will certainly be in with a chance and at 12/1 he represents the best value in what is otherwise a relatively weak market.

Special mention to Justice Hill, Darwin Thompson and Darrell Henderson who could all make a push if given the opportunity and should be available at bigger odds.

Chiefs In Line For Championship Run

The Kansas City Chiefs would consider themselves unlucky not to reach Super Bowl LIII last year. After a superb regular season which saw second-year QB Patrick Mahomes announce himself as a generational stud, the Chiefs succumbed to an overtime loss in the AFC Championship to eventual winners the New England Patriots. Whichever team won the coin-flip that night was destined to progress, and lady luck did not shine on Andy Reid and his men.

You would imagine the Chiefs will follow a similar path this year, and punters will be hopeful they can go one step further. Heavy reinforcements on defense have come into the fray. Tyrann Mathieu, Emmanuel Ogbah, Alex Okafor and Frank Clark have all been added to the ranks. They should have no problem improving their total defense rank of 31st from last year.

Tyreek Hill’s off-season drama has been put aside and he is ready an available from week one. Travis Kelce is the best tight-end in football and a slew of speedy RBs and WRs are on hand to compliment this electric offense.

Despite a relatively difficult schedule they are still odds on at 1/4 with RedZone to make the playoffs and have enough talent on both sides of the ball to progress through to the Super Bowl at Hard Rock Stadium next February.

After a majorly disappointing season for the Atlanta Falcons last year they will be hoping to bounce back and make a real run for the playoffs. The man expected to lead them there, Matt Ryan, is a former MVP winning quarterback with a wealth of talent surrounding him and the 11/2 with RedZone about him having the most passing yards - which you can find in the season long player props betting market - is an absolute bargain. 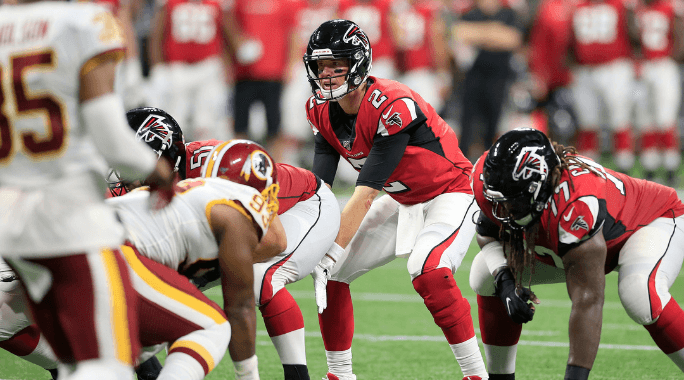 Entering his 11th year in the league, ‘Matty Ice’ has registered over 4,000 passing yards in his last eight seasons and came just 66 yards short of the elusive 5k club during his MVP year and Super Bowl run back in 2016.

He certainly has the weapons at hand to help him eclipse that mark with stud receiver Julio Jones complimented by second-year standout Calvin Ridley and the usually reliable Mohammed Sanu. Opposing teams will be forced to respect the run with Devonta Freeman and Ito Smith in the backfield.

There is more method to this madness, however, in the fact that Ryan will play an incredible 13 games indoor this season. On top of that, the remainder of their fixtures will take place in what will you expect to be decent weather (San Francisco, Miami and Carolina).

As with most QBs, Ryan is a far more prolific passer when playing indoors. Since 2007 he has been shown to throw 50% more touchdowns in dome games. 26 of his best 37 statistical scoring games have also come inside. Weather related worries will not affect Ryan this year, and the same cannot be said for his closest competitors in the betting market.

Atlanta ranked 28th in total defense last year, meaning they shouldn’t be able to rely on the running game to keep the clock ticking. The Falcons tend to be involved in high scoring outings and I would expect more of the same this year.

Main threat Mahomes will be due some regression this year, with teams having the advantage of a full year of scouting tape to lean back on. Ben Roethlisberger lost No.1 target Antonio Brown who usually accounts for close to 1500 yards, while old-timers Drew Brees and Tom Brady will lean more on their running backs if last season is anything to go by.

If 5/1 doesn’t tickle your fancy, Matthew Stafford is another interesting option. He boasts a 5,000 yard and multiple 4,000 yards campaigns throughout his career. A trio of very good wide receivers and a new toy in the shape of first-round tight-end TJ Hockensen – combined with another pre-season installing Matt Patricia’s offence - could signal a resurgence from University of Georgia alumni. He’s available at 66/1 with Betway.