Undefeated pound-for-pound superstar Terence Crawford takes on former titleholder Amir Khan in a huge title bout with massive ramifications in the welterweight division and beyond.

A world champion in three different weight classes, Crawford is a huge favorite headed into the fight against Khan, a popular UK fighter who has looked unbeatable at times only to see it all come crashing down via well-placed power punches.

Crawford-Khan takes place Saturday, April 20, at Madison Square Garden in New York. Crawford is -1400 on the outright win market to hand underdog Khan (+800) the fifth loss of his professional career.

Crawford, 31, of Omaha, Nebraska, is one of the top fighters in all of boxing. He’s already been lineal lightweight champion, lineal and undisputed junior welterweight champion, and he’s currently in the midst of an impressive welterweight run that hopefully culminates in bouts against the other division titleholders, most notably IBF champion Errol Spence.

Probably the most complete fighter in all of boxing, Crawford (34-0, 25 KOs) is also one of the few fighters in boxing history who can fight out of both orthodox and southpaw stances with equal success.

He’s smart, capable and a mean-spirited fighter who systematically breaks down his opponents with a steady onslaught of quality leads and well-timed counters.

While some consider promotional stablemate Vasyl Lomachenko, the current unified lightweight champion, to be the top fighter in boxing, the most reasonable choice for the honor is Crawford. 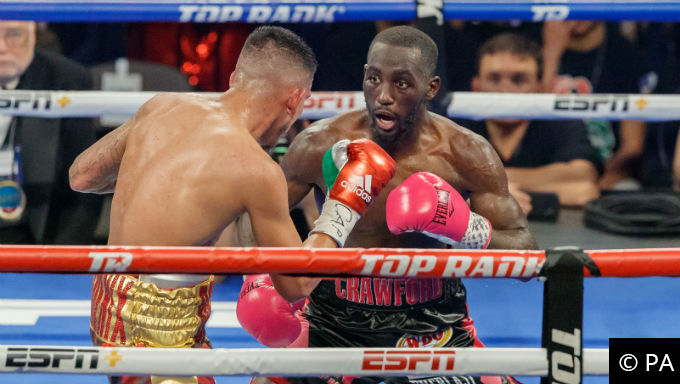 Khan, 32, of Bolton, England, is a case study in how a boxer who seemingly has all the physical tools necessary to become historically great can still somehow not quite get there. He possesses absurdly fast hands that can overwhelm anyone who is not elite, and he’s a sharp puncher who enjoys mixing it up more than he probably should.

Perhaps the greatest trait Khan (33-4, 20 KOs) possess is the one that gets him into the most trouble. For all his defensive flaws, most notably that he can’t seem to stay out of harm’s way for a full twelve rounds no matter how hard he tries, Khan still uses his immense popularity to attract the biggest and best names in boxing.

Khan is a brave challenger, one who repeatedly called out the likes of Mayweather and Manny Pacquiao despite never being in the same league as them before finally getting one of the next generation’s top fighters, Canelo Alvarez, to answer his call for a middleweight title bout in May 2016.

For his trouble, Khan, who had never fought above 147 pounds, was knocked into oblivion in six rounds by the much larger Alvarez.

Boxing betting fans sometimes fall for Khan as the underdog because there are times where he appears so brilliant. Even against Alvarez in a dangerous and woeful mismatch, Khan had his moments.

But Khan has never really put a complete 12 rounds of excellence on his ledger. He was shockingly knocked out Breidis Prescott in 2008, upset by Danny Garcia the same way in 2012 and has been knocked down in wins by lesser-known fighters like Julio Diaz and Samuel Vargas.

While he might win some early rounds against Crawford before the American gets his proper timing down, once it happens it should be a fairly one-sided fight that ends with Crawford’s hand raised in victory.

Backing Crawford by any method at -1400 is the safest bet on the board. While Khan possesses a flashy skill set, professional fights are won and lost by landing accurate punches and avoiding them in return. Khan isn’t nearly as accurate a puncher as Crawford, and he’s most certainly not as good at avoiding them.

Crawford is likely to stop Khan. It might not be as devastating a knockout blow as the much larger Alvarez landed, but Crawford will adjust to whatever game plan Khan brings into the fight and gun for the stoppage win.

So, going to Karamba and backing Crawford by KO or TKO at -250 is a solid choice because it means not having to pick the round or group of rounds in which the fight ends.

If dead set on getting more value by taking a larger risk, look at Crawford in Rounds 7-12 at +135 with 888Sport Khan is good enough to get through the majority of early rounds on talent alone and Crawford sometimes takes his time before turning up the pressure anyway.