Sports betting in Alberta has been identified as one of the most promising betting markets in Canada that has the potential for substantial growth.

Even before the introduction of Bill C-218, which legalized single-game sports betting, there was a strong hunger for online sports betting market in the Alberta, in both regulated and unregulated markets.

Boasting over 4.3 million residents, the Rocky Mountains, and two NHL franchises, Alberta is considered to be one of the bigger sports hubs in Canada.

The province is home to some of the oldest casinos in Canada, and the provincial lottery and gaming commission has seen millions in revenue through their SportSelect product that offers online sports betting in the form of parlay wagers.

Alberta is one of the wealthier provinces in Canada, with oil fields, natural gas, large city centers and more. Usually with wealthier provinces, comes more disposable income, some of which can be used to wager on sports or casino games. This is a great motivator for the province to regulate and legalize sports betting as soon as possible - and that's exactly what they did, launching the province's first sportsbook on August 27th - the day single-game wagering launched in Canada.

Gambling has been in Alberta since the 1920s, where horse betting and bingo turned into lotteries, charitable gambling, and more. The 1980s saw the boom of casinos in the province, starting with the independently-owned Calgary Cash Casino popping up in 1980. In fifteen years, the province saw over 11 casinos open its doors, and to this day, you can find 24 commercial casinos and five First Nations casinos throughout the province.

Currently, the only forms of legal sports betting in Alberta is through the lotteries and gambling commissions, with the existing SportSelect software owned by the WCLC (Western Canada Lottery Commission) and the newly created PlayAlberta sportsbook which is owned by the AGLC (Alberta Gaming, Liquor and Cannabis).

Until now, Alberta sports betting enthusiasts have weighed the pros and cons of an offshore betting site and SportSelect. While SportSelect is regulated in Canada, it simply could not compete with an online sports betting site that offers much better odds, huge bonuses, loyalty programs, and a wider selection of betting options. We expect the SportSelect product to remain consistent, but we expect the new PlayAlberta sportsbook will fill the void.

Now that single-game sports betting is here and legalized, it will be up to provincial governments and gambling regulators in the province to come up with a strategy to roll out the products and license operators.

Currently, the Alberta Gaming, Liquor and Cannabis (AGLC) regulates and licenses all sports betting and casino activity, as well as other gambling functions in the province. The AGLC has long expressed their support for Bill C-218, and it was no surprise they had their PlayAlberta sportsbook ready to launch when the lights turned green.

AGLC representatives have started offering single-game betting on their existing PlayAlberta product online and in physical venues, however, it is unclear if they will be looking into licensing popular online sportsbook operators such as DraftKings and FanDuel now that Bill C-218 has become law.

There has been no mention of what the future holds for SportSelect and whether the AGLC will continue to offer the Western Canada Lottery Commission’s product alongside their PlayAlberta sports betting platform. It’s expected that the rollout of the product will follow quickly on from the introduction of sports betting in Ontario.

While the SportSelect product is conveniently sold at gas stations, lottery kiosks, and grocery stores, we simply don’t think it stands a chance against PlayAlberta. Unless there are huge improvements by the Western Canada Lottery Corporation to the SportSelect product, we don’t expect it to be a popular option especially if operators start buying up sports betting licenses in Alberta one day.

The only U.S. state that borders Alberta is Montana, and they have had legalized sports betting since May 2019, which allowed the opportunity for Southern Albertans to cross the border and take advantage of single-game betting in-person before Bill C-218 was passed. 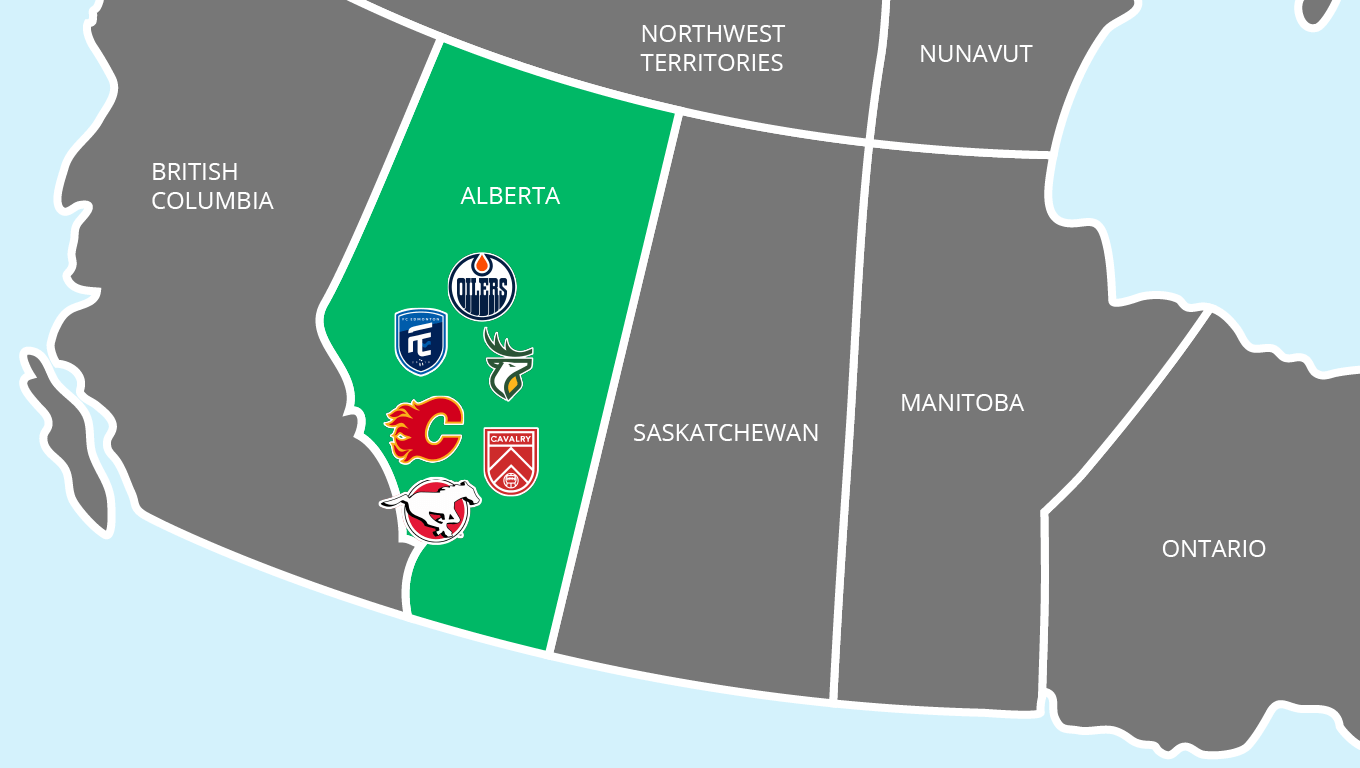 Yes, online sports betting has been technically legal in Alberta since 1985, however there was a ban on single-event sports betting until Bill C-218 was passed in June 2021.

The Criminal Code was updated in 1985, adding a section that made sports betting, bookmaking and other gambling acts illegal. Several years after, in 1992, the Gaming Control Act was put in place which allowed provincial lotteries and gaming commissions like the Western Canada Lottery Commission to regulate multi-leg sports betting through the provincial lottery.

This gave the Western Canada Lottery Commission the ability to provide Alberta residents with the SportSelect Pro-Line offering, which allowed sports betting as long as bet slips had parlay wagers. Parlay wagers are multi-leg bets that link the game outcomes together so that all legs of the bet slip must be correct for a winning ticket.

You could bet on the Calgary Flames and the Edmonton Oilers to win on a Saturday night, but you couldn't just bet on one team. Parlays take the odds on the Flames and the Oilers and combine them to make the bet riskier, but ultimately will create an opportunity for a larger payout.

The Canadian government gave sports betting fans an olive branch in 1992. While they weren’t ready to legalize sports betting altogether due to the probability that there could be match-fixing implications, they allowed multi-leg sports betting as it would be difficult to fix two or more matches.

This made it legal to offer SportSelect alongside lottery offerings in grocery stores, convenience stores, gas stations, and other kiosks around the province. The legal gambling age in Alberta is 18 years old for any activity, which is lower than other, more strict provinces.

While Canada has always been a bit of a grey area when it comes to sports betting, where some forms are legal (parlays) and others are not (single-game sports betting), we now have a light at the end of the tunnel for Alberta sports betting fans.

Single event sports betting has been a topic of discussion in Canada for the better part of a decade, and finally, in June 2021, Bill C-218 passed, making single-game wagering legal in Canada. Now, the Alberta Government has the ability to regulate and manage sports betting in the province, through their PlayAlberta software and also have the ability to allow operators to obtain licenses and bring much-needed revenue into the province that was hit with COVID-19 the worst.

The two NHL teams in Alberta have had a huge rivalry since the 1970s, and games between the two teams can be intense, earning the nickname ‘The Battle of Alberta’.

If you prefer betting on horses and are looking to place a few horse betting wagers in Alberta, there are a few great racetracks that offer on-site betting as well as off-track betting on major American races. Most of the excitement of betting on horse racing is getting to watch the races live, and you can do so at any of the following Alberta racetracks:

Alberta is home to some of the oldest casinos in Canada, and to this day, the establishments still get lots of love. As one of the wealthiest provinces in Canada, there is plenty of disposable income, and usually, those with disposable income enjoy heading to a casino to bet a few dollars on their favourite games.

There’s a great selection of casinos in Alberta located all around the province. They offer slots, table games, entertainment and more.

There are also five First Nation casinos in Alberta that are located on reserve land, owned directly by Indigenous groups. Much of the revenue from these casinos go toward charitable and religious programs within the First Nations community.

In terms of online casinos in Alberta, we’ve discussed the PlayAlberta site that is regulated by the AGLC, which will be the main sports betting offering in Alberta. They currently offer casino games through GameSense software, which is a reputable and fair gaming platform. The money gambled on PlayAlberta goes directly back into the community through the Alberta General Revenue Fund to support programs for Alberta residents.

Is sports betting in Alberta legal?

What is the minimum legal age to gamble in Alberta?

The minimum age to bet on sports in Alberta is 18 years old. Alberta's age of majority is one year less than most other provinces.

How many casinos are in Alberta?

There are 24 commercial casinos and five First Nations casinos in the province of Alberta. Several of the horse racing tracks are combined as casinos as well to have a great selection of land-based casino game play in the province.

Yes, thanks to Bill C-218 passing the Senate in June 2021 and launching in August 2021, single event sports betting is now legal in Alberta, making all sports betting activity available.

Where can I bet on sports in Alberta?

Currently the first and only sportsbook available in Alberta is their lottery-owned PlayAlberta sportsbook. We are unsure whether there will be independent operators at this time.

"I'm an avid sports fan and content creator from Nova Scotia, Canada. I have over 14 years of experience in the gambling space, specifically in the sports betting industry specializing in sportsbook reviews and sports betting educational content."