Two-time Cheltenham Festival winner Presenting Percy sits atop the Cheltenham Gold Cup betting, but is he the best bet to play ante-post?

Trained in a small town in the west of Ireland, the eight-year-old has only run twice since landing the 2018 RSA Chase at the Festival, and is 11/4 across the odds boards, Native River 11/2 to defend his title.

Not even Kauto Star managed to achieve back-to-back Cheltenham Gold Cup wins, so is Presenting Percy, leading the Cheltenham betting, the champion-elect? Rory Delargy says he isn't the best bet in the ante-post odds.

Last year’s RSA Chase winner Presenting Percy was very impressive in beating Monalee et al last March. He had previously won the Pertemps Final Handicap Hurdle to show that a big field at the Cheltenham Festival brings out the best in him.

Rewatching that RSA Chase the other day, I was really impressed by his performance. He was given a long break after that, which is an unusual approach, but trainer Pat Kelly is not a trainer in the traditional mould.

His willingness to do things to his own timetable, rather than according to accepted practice, is justified by his remarkable record at Cheltenham. The trainer from Craughwell in County Galway had the misfortune of seeing his talented novice Art Trail break down irrevocably when leading at the top of the hill in the 1990 Supreme Novices’ Hurdle.

Since then, he has sent just two horses to Cheltenham, but they have won three races between them, with Mall Dini also landing the ultra-competitive Pertemps Final in 2016, and finishing half a length second in last year's Kim Muir Handicap Chase.

The fact that Presenting Percy won over hurdles on his belated return to action earlier this month will put some off, but I trust Kelly’s methods, and he is ensuring that his big hope will be fresh and well for his big engagement.

Don't forget, last year he also won a hurdle race on route to winning a Grade 1 over fences at Cheltenham. He is a top price of 11/4 with most of the leading horse racing bookmakers. 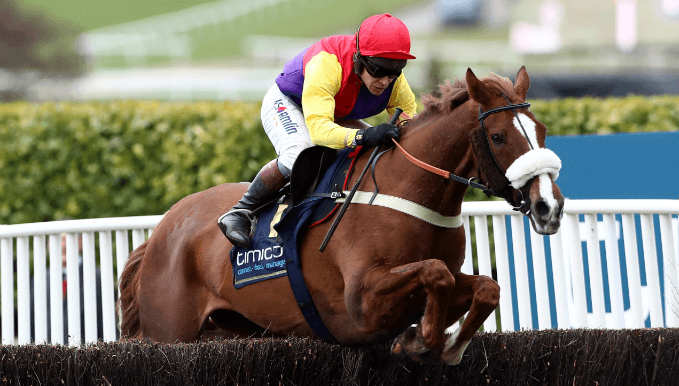 Defending champion Native River (11/2 William Hill) has been racing on faster ground than ideal this season, and has run well in the circumstances to be placed at Haydock and Kempton. He will be a more potent force returned to a galloping track and softer ground, and is respected, for all the feeling is that the going at Cheltenham is more likely to ride good than heavy.

Bellshill (14/1 Ladbrokes) won the Irish Gold Cup in a tight finish from Road To Respect (14/1 Bet365), and he impressed with his jumping in particular. He stays well and could be a player, for all there are niggling doubts about his previous record at the track where he has a third place finish from three runs, although the unplaced efforts have come at the minimum trip.

Kemboy (10/1 William Hill) won the big chase at Leopardstown at Christmas and has a progressive profile, but his success was in large part down to clever tactics, and I feel he will be at his best when able to utilise his superior tactical speed, meaning he will be a bigger player if the ground is on the faster side for the Gold Cup.

Last year's Gold Cup second Might Bite has not looked the same horse this year, and he’s hard to back with any confidence at current odds of 20/1 in the Gold Cup betting with Unibet.

The Paul Nicholls-trained Clan des Obeaux (10/1 William Hill) sprung a minor shock when winning the King George VI Chase at Christmas, proving suited by the relative test of speed there on good ground.

I’m not sure his effort at Kempton represented a massive step up from him, as much as it played perfectly to his strengths, and I would be surprised if he could win, for all he will find other Grade 1 prizes coming his way.

At bigger prices, I like Bristol de Mai, a 40/1 chance who is the form pick on his Betfair Chase win, while both Elegant Escape (25/1) and Terrefort (25/1) arguably ran better Gold Cup trials in Cheltenham's Cotswold Chase than the winner Frodon did.

Elegant Escape needs a stiffer test, and Terrefort would have just needed the run that day, having picked up an injury on his reappearance at Sandown back in November.

Returning to Bristol De Mai, he gets a huge amount of stick for a horse who produces some spectacular performances, and while Cheltenham is not really ideal, he ran very well in both the JLT Novices' Chase in 2016 and the Gold Cup in 2017.

He is best fresh, and has only had one proper run this season, having taken an uncharacteristic fall at the ninth fence in the King George. We know his limitations, but the bias against him means his price is too big to ignore.

Related: For bonus and offers check out New betting sites.

Why They Are The Best Bets:

As I said above, I’m not at all keen to take on Presenting Percy, who looks very strong, notwithstanding his imminent prep run at Gowran Park this Saturday, but there is a bit of value to be had to smaller stakes in advance of the Festival, especially with the Best Odds Guaranteed (BOG) and Non-runner-no-bet (NRNB) concessions with a couple of bookmakers largely eliminating unnecessary risk.

Bristol de Mai is too good to have odds of 40/1, but looks sure to run, so I’d rather take the 40/1 about him without NRNB than shorter odds with it, but it’s debatable whether his owners will also run Terrefort.

I’m happy to take shorter Gold Cup odds (25/1 versus 33/1) with him with the insurance of NRNB, and if the field cuts up, he could be a decent price. If it doesn’t, that’s a setback, but we’ll be settled at SP, which is likely to be fair in a competitive market.