With a population of over 8.4 million people and much of the population located near the bustling party city of Montreal, Quebec is no stranger to all forms of gambling. While the province has always had a stance against online betting sites , gambling online on sports has always been rampant in Quebec.

Quebec is one of two bilingual provinces; however, it is the only province in Canada where French tends to be prevalent over English.

Major sports teams in the province include the Montreal Canadiens of the NHL, Montreal Alouettes of the CFL and the Montreal FC representing Major League Soccer. Montreal is the party central of the province, raking in tourism revenue and sports fans. Many flock to Montreal from across Canada because the age of majority is lower than most other provinces – 18 year-olds can enter bars and nightclubs or gamble at their leisure.

Canadians had been banned from betting on single-game events since 1985, and until June 2021, when Bill C-218 was passed by the Canadian Senate. The new legislation will allow provinces to regulate their own single-game wagering and allow operators and sportsbooks to operate in the province at their discretion.

While the provincial lottery’s Mise-O-Jeu is mediocre for a sports betting offering, it has been quite popular, but not nearly as popular as unregulated online betting sites located offshore. These sites are not illegal in Quebec and have provided Quebec residents an opportunity to bet on single events these past few decades.

Also, an important note in relation to gambling in Quebec is that The Kahnawake Gaming Commission, owned by the Mohawk Council of Kahnawake First Nations are located in close proximity to Montreal. They have been able to license and regulate sports betting and casino play on First Nations lands since 1996 and own a handful of poker rooms in Kahnawake itself. 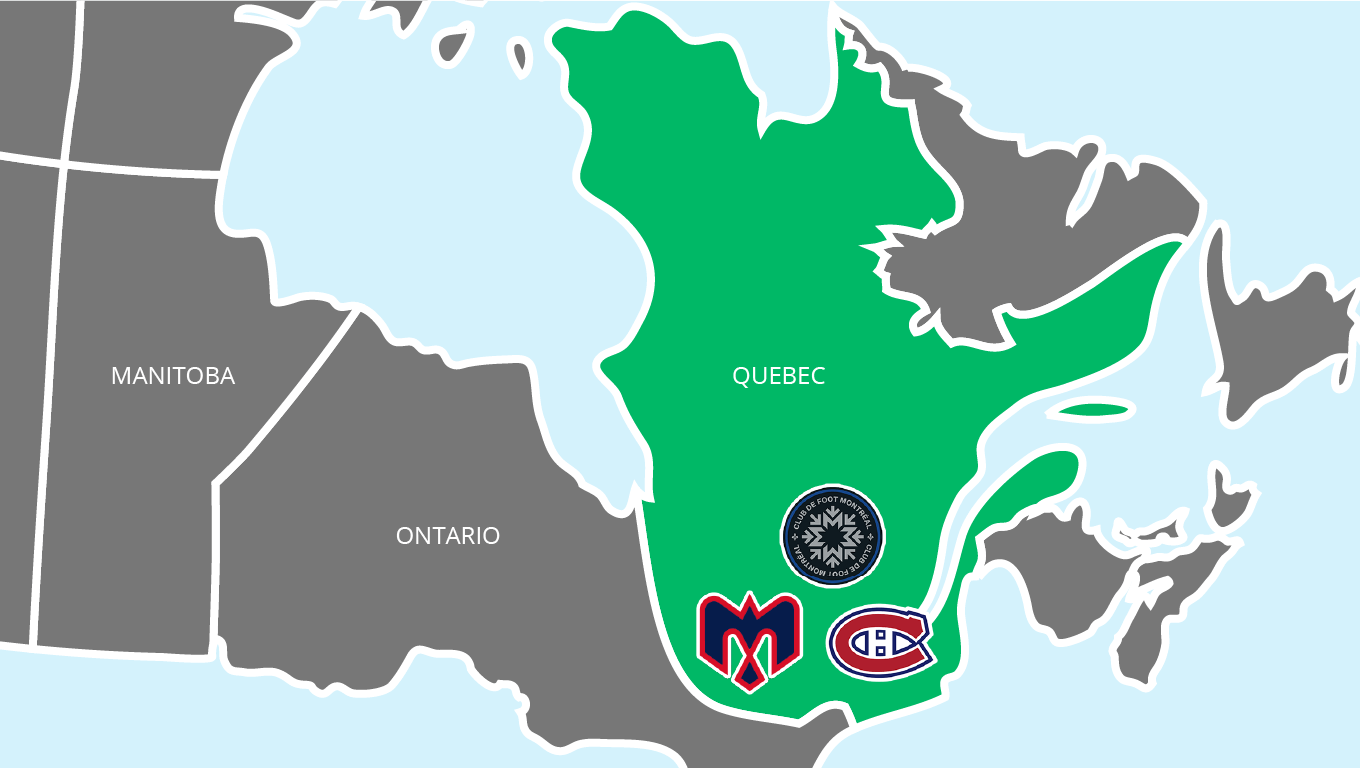 For the past few decades, online sports betting sites have been popular in Quebec, despite government officials trying to ban them entirely. Quebec has had the same laws and regulations surrounding sports betting as the rest of Canada – banned single-game wagering and can only offer parlay betting – until now.

You can purchase these Mise-O-Jeu bet slips at any gas station, lottery kiosk or convenience store in Quebec. Having sports betting lumped in with lottery offerings across Canada has made it very accessible to bet on sports in general – not to mention the rise of sports betting apps in the past decade.

Mise-O-Jeu has always been quite plain in terms of what you might be used to if you have been betting on online sportsbooks for years. Of course, until legislation rolled out in Quebec, only parlay wagers have been available, which means Quebec residents have had to bet on multiple games at once instead of betting on a single game or outcome.

They offer basic betting options including moneyline wagers, totals and point spreads, as well as a few basic proposition bets for each game. They don’t offer even a quarter of what online sports betting sites like Bet365 would offer on the exact same game.

Ontario’s capital, Ottawa, is a very short distance from Quebec, as many commute across the borders for work and play – which can be interesting in regards to gambling laws. Ontario is poised to be the first to legalize and regulate independent sports betting operators in Canada, and with such close proximity, Quebec users could use the services quite easily. This would be a huge push for Quebec lawmakers to follow Ontario’s lead and welcome sports betting operators like DraftKings and BetMGM with open arms.

With three major sports teams to bet on, the province of Quebec surely offers a wide variety of betting markets for all betting enthusiasts.

The Montreal Canadiens are the oldest NHL team, after being established in 1909, but not actually forming NHL alongside other teams from Quebec and Ontario until 1917. It is one of the ‘Original Six’ NHL teams from the 1940s to 1960s era, which also included the Toronto Maple Leafs, the Boston Bruins, New York Rangers, Chicago Blackhawks and the Detroit Red Wings. The Canadiens have the most Stanley Cup Championships with 24 (one of which was before the NHL was actually formed).

Also known as the ‘Habs’ by loyal fans, the team plays in the Atlantic Division in the Eastern Conference. Most recently they found themselves in the 2021 Stanley Cup Final, where they lost the series to the Tampa Bay Lightning in five.

The lone Canadian Football League team in Quebec is the Montreal Alouettes, evidently based in Montreal. The Alouettes compete in the East Division and have won seven Grey Cup titles since joining the league in 1946. They’ve had most of their success in the 1970s and 2000s where they won three titles in each of those decades. The single Quebec team in a division full of Ontario football teams makes them an easy rival for any team they play.

Montreal FC, or Club de Foot Montreal, is the only professional soccer club in the province. The club was established in 2010, maintaining the legacy of the dissolved North American Soccer League (NASL) team, The Montreal Impact. The team plays out of Saputo Stadium in Montreal and plays in the Eastern Conference of the Major League Soccer. In 2015, the Montreal FC team became the first Canadian team and second MLS team to advance to the CONCACAF Champions League, finishing in second place.

Horse racing and horse betting in Quebec seemed to hit its peak in the early 2000s, and to this day there is only one location where professional horse racing takes place.

The Hippodrome 3R hosts professional harness races from May until November and offers betting on site in their betting parlour. Their betting software is run by HPIbet, which allows some off-track betting for major races such as the Triple Crown races as well as some other international events.

The Hippodrome is located in Trois-Rivieres, Quebec and if you can’t make it to the racetrack, you can visit in Boucherville one of their partner locations , Dorval, Laval, Montreal and Cote Saint-Luc.

It’s surprising to see that the horse racing market in Quebec is quite dull, as the province was the host to the first-ever horse race in Canada in 1767 in Quebec City.

Casino betting in Quebec is a huge market, especially when Loto-Quebec owns a provincially run online casino called Espacejeux. There are four major casinos in Quebec that all offer their own online offerings as well that are all connected by the Societe des casinos du Quebec (SCQ), that was established in 1992 to manage policies and regulate the casinos in the province.

Montreal Casino offers any game you could imagine, including slots, table games, Keno, and even a special immersive and interactive area called the Zone. There’s more than just casino games, you can take in shows and Cabaret or visit the bars or restaurants. The Montreal Casino is huge structurally and there is something for everyone – gambler or not.

The Casino de Charlevoix looks a little more like a castle than a casino, but offers all the best slots, table games, poker and Keno from their La Malbaie, Quebec location along the St. Lawrence River. They also offer their own online casino to those who can’t be there in person, even though they have a beautiful hotel and golf club near by.

The Casino Lac Leamy is located in Gatineau, Quebec, and offers a great selection of table games, slots, and also boasts that immersive Zone experience we mentioned at the Montreal Casino. There is a huge amphitheater that hosts plenty of shows, and you can visit one of the bars or restaurants while you’re there. Gatineau is a very short distance from Ottawa, making it easy for Ontario residents to cross the border to visit the grandiose casino.

Casino de Mont-Tremblant is situated near the prestigious Mont Tremblant Ski Resort, where you can catch a gondola ride to the casino area from the ski hill – how cool is that? The casino offers a huge selection of popular slot games as well as plenty of table games.

Is sports betting in Quebec legal?

What is the minimum legal age to gamble in Quebec?

The age of majority in Quebec is 18. You must be 18 or older to enter a casino or sign up for a sports betting account within the province of Quebec.

How many casinos are in Quebec?

There are four major casinos in Quebec and are managed by the Societe des casinos du Quebec (SCQ). These prestigious and luxurious casinos are located around the province and also offer online casino betting.

Yes, as of August 27, 2021 single-game sports betting is legal in Quebec and will be regulated by Loto-Quebec.

Where can I bet on sports in Quebec?

You can bet on sports online at any online sports betting site, as well as in person at any Loto-Quebec kiosk or vendor location.

"I'm an avid sports fan and content creator from Nova Scotia, Canada. I have over 14 years of experience in the gambling space, specifically in the sports betting industry specializing in sportsbook reviews and sports betting educational content."