Our love for sports knows no bounds, and after over a year of uncertainty facing the sporting world, people are ready to get back out there and cheer on their favourite teams.

So, if you’ve got the travel bug once again and are raring to get back into the bright lights of a stadium, these are the cities you should visit!

The Best Cities To Be A Sports Fan 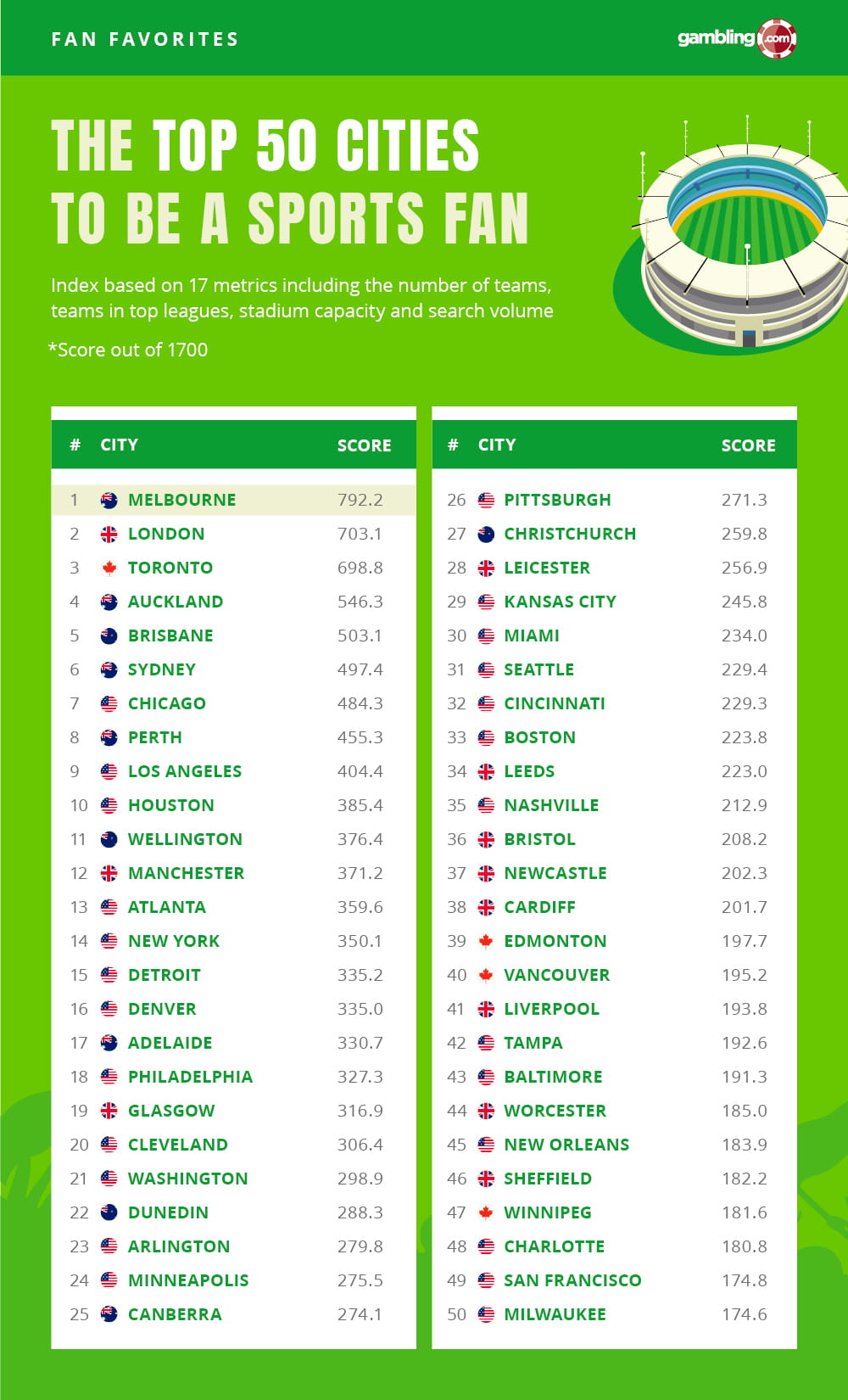 Not all cities are created equal, so what makes a city a must see for sports fans?

By investigating 17 different metrics and giving each city a score out of 1700, the team at Gambling.com have created a worldwide index to reveal which are the best cities for sports fans to live or visit.

The Cities With The Most Seats 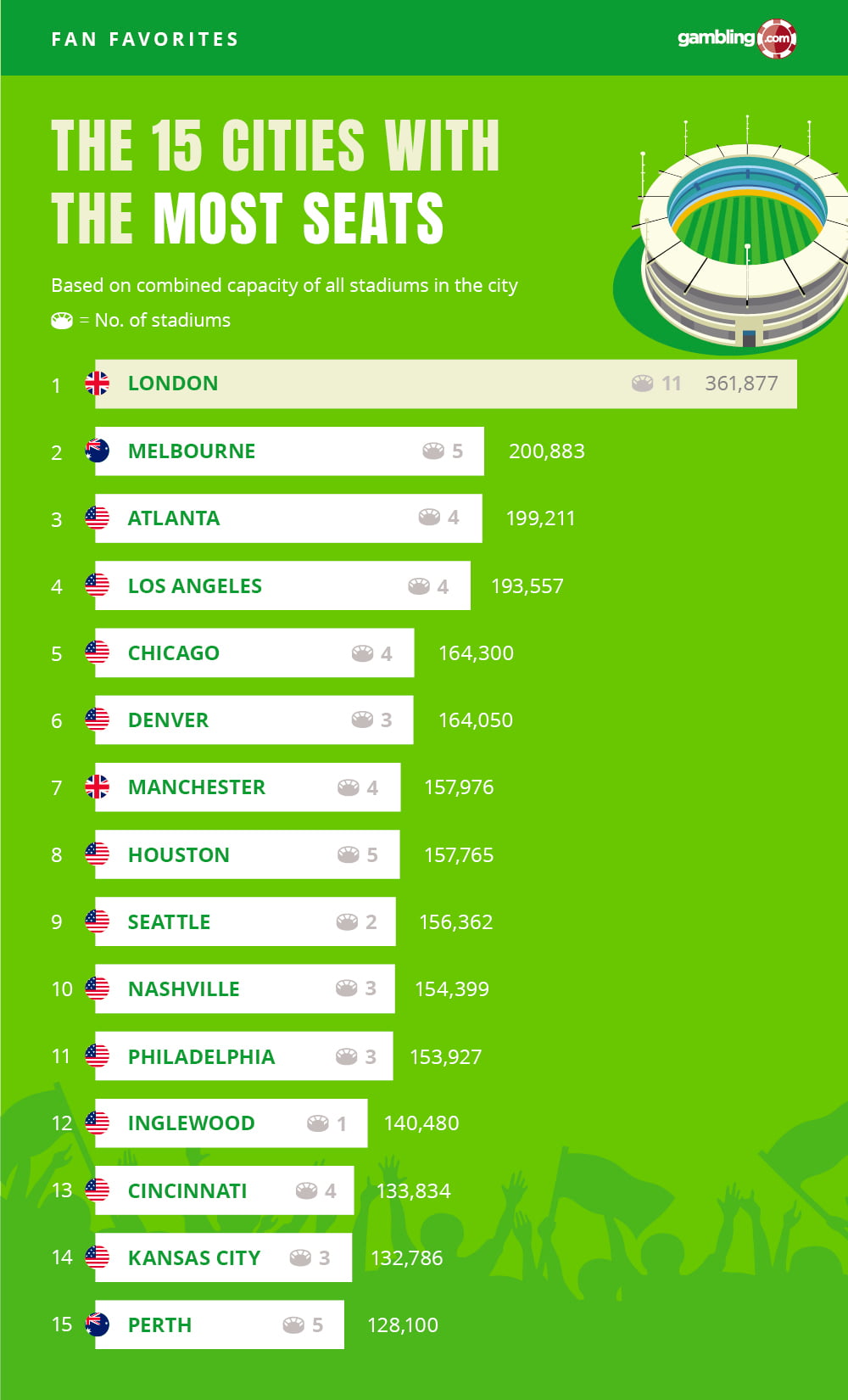 Stadiums represent so much more than just where you sit to watch a game. Stadiums are known for their electric atmosphere and memory-making experiences, and that's why Gambling.com included stadium size in the study.

When it comes to choice of seats, London, UK, comes out on top, with an impressive eleven stadiums and a combined seat number of over 361,000! Next to appear on the list is Melbourne, Australia, with over 200,000 seats across five stadiums. But Melbourne isn’t the only Australian city to appear in the top 15, Perth just sneaks in at 15th with 128,000 seats across five stadiums.

In third place is Atlanta, US, with over 199,000 seats across five stadiums and is the top US city for stadium size. But other US cities appear on the list such as Los Angeles, Chicago and Denver.

The Cities With The Most Teams In Top Leagues

You don’t have to be a sports fan to have a good time during a game! Attending sporting events is almost always a good time, especially if the team you’ve gone to watch wins.

Cities which have the teams in the top leagues are more likely to generate passionate fan bases, which is to say it’s likely people experience a top-tier sporting atmosphere due to the amount of passionate fans.

At a three-way tie for first place, Melbourne, London and Sydney each have 10 teams in top sporting leagues, making them all great cities for sports fans to visit.

Tied second place are Toronto, Auckland and Brisbane, each with seven teams in top leagues. Whilst Toronto is the only Canadian city to appear in this list, Auckland is joined by fellow New Zealand city Wellington, which has five sports teams in the top leagues.

The Most Popular Sports Team In Each City 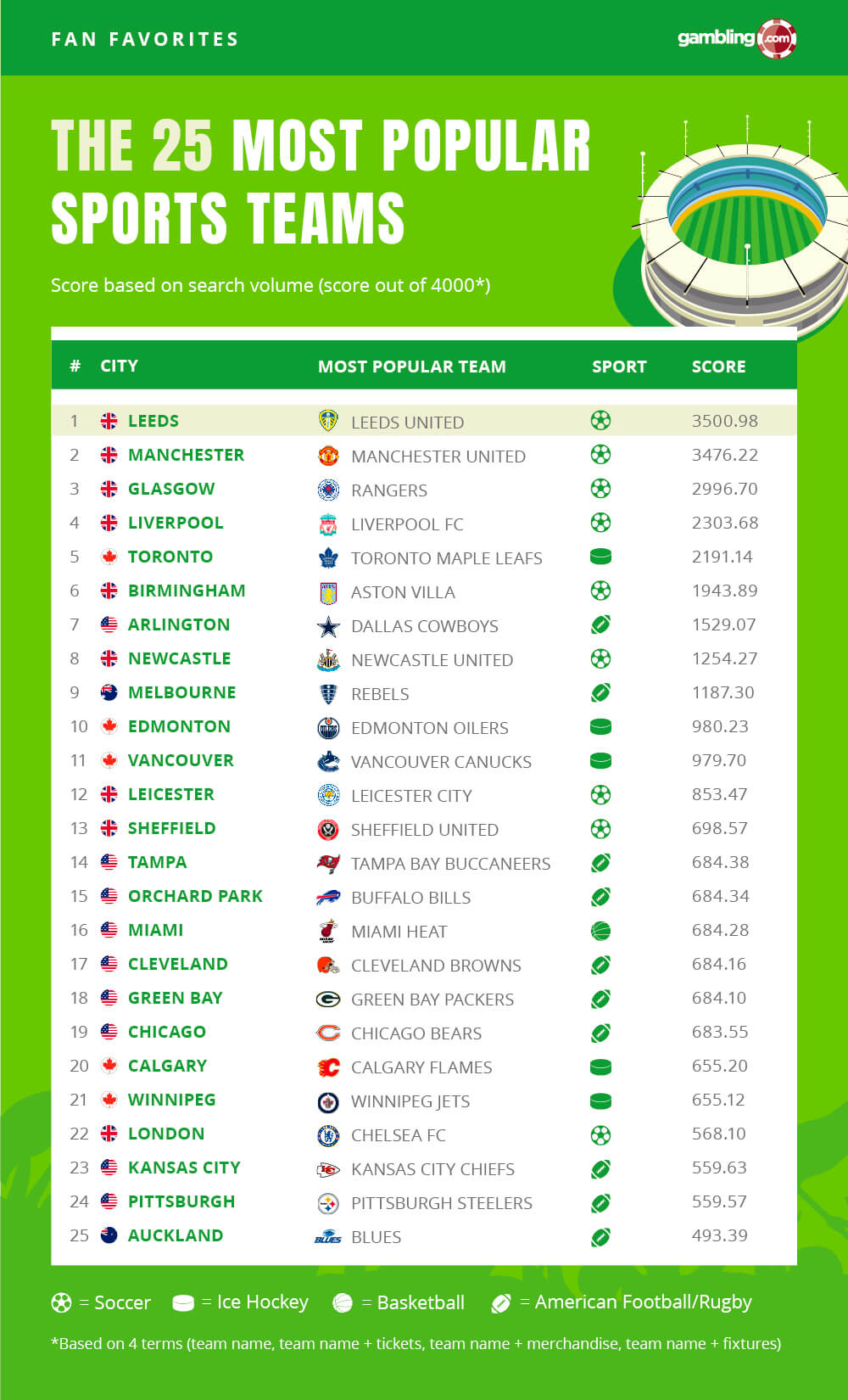 Potentially one of the most vital parts of being a sports fan is being able to land tickets to your team's games, which is why search volumes have been included in this study. By analysing searches such as team name + tickets, team name + merchandise or team name + fixtures (or game), Gambling.com was able to discover which sports teams are the most popular!

Coming in on top is Leeds United, a soccer team from England. In fact, the top four teams to appear in the search volume data are English soccer teams, showing how popular Premier League soccer has become.

However, Toronto reappears in this list at fifth place, with a high number of searches for their beloved NHL team the Toronto Maple Leafs! But Toronto may have some competition as the Edmonton Oilers and Vancouver Canucks appeared at 10th and 11th on the list.

The first US city to appear in the list of most popular sports teams is NFL franchise Dallas Cowboys at seventh place, one of the most famous sports teams in the world. Also representing the US, we have the likes of the 2021 Super Bowl winners, the Tampa Bay Buccaneers appearing at 14th place.

But what about New Zealand? Never fear rugby fans, as the Auckland Blues just sneaked into the top 25!

What’s Next For Sports Fans?

As the world begins to welcome back sports fans into stadiums and events, where will you choose to attend your next sporting event?

Each metric can contribute up to a total of 100 points, meaning each metric contributes points to the overall city score within the index. The index is calculated using 17 metrics:

The sports chosen for this study were picked because they are some of the most-watched and most popular team sports in Canada, New Zealand, the United Kingdom, the United States and Australia. The countries chosen for the study are English-speaking countries and jurisdictions in which Gamblng.com operates.