The offensive portion of your NFC playoffs is about to commence.

The big story of Wild Card Weekend betting in the conference was the ouster of the best defensive team in the field, the Chicago Bears, thanks to a little more Nick Foles postseason magic and a tipped last-second field-goal attempt. With the Bears’ titanic defense now on the shelf, the offensive fireworks may heat up quickly.

It was going to get cranking anyway with top seeds, New Orleans and Los Angeles, joining the party in the divisional round. The Saints, the No. 1 seed, host the Eagles (No. 6 seed) Sunday and the Rams (No. 2) host the Dallas Cowboys (No. 4 ) on Saturday night.

The Saints and the Rams are two of the most explosive teams in the NFL. Their opponents, Dallas and Philadelphia, can both play decent defense. But New Orleans and Los Angeles will still put plenty of points on the board this weekend. The only real threat for those offenses was Chicago’s defense. But they’re gone.

Dallas can be scored on. Seattle, with an average offense, tallied 22 points in the wild-card round. The Rams’ offense is much more potent than Seattle’s.

So, I believe the unit is fixed. Defensively, the Rams defense gives up a lot of points. Two of their three past opponents scored 30 or more points against the Rams. Dallas has some special offensive weapons in quarterback Dak Prescott, running back Ezekiel Elliott and receiver Amari Cooper.

If Cooper can getting going against a beatable Rams’ secondary, Dallas will score some points. So bet the over with 888Sport.

The Rams offense will probably click in the second half better than the first half, anyway. It will be playing on a 13-day break, so there may be some early rust. All of these reasons are why taking the second half as the highest scoring half at -106 with Betfair is a good bet. 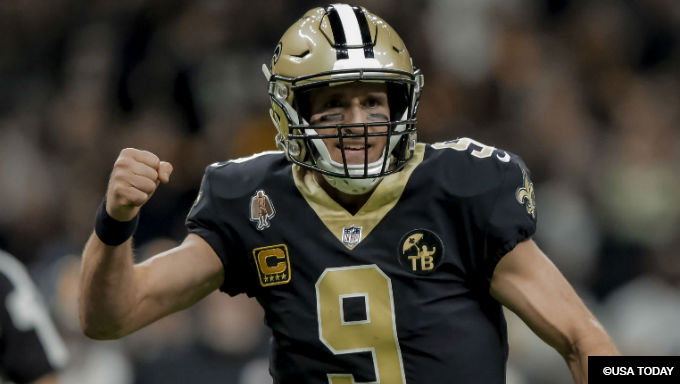 You can sense a theme here, right? The Superdome is a points emporium and Brees is the ring master. The Saints offense has been humming most of the season. Brees turns 40 next week. However, he is playing as well as he ever has and he is an MVP candidate.

I believe this offense will be ready to put on a big show. Yes, the Eagles defense can be pretty good, and the Eagles are hot right now. But Brees is not Mitch Trubisky.

Defensively, the Saints are strong. But Foles has playoff magic, so there will be some Eagles points scored. I think these two quarterbacks will make the over 50.5-point total winnable. Take the over with Karamba.