UFC 239 comes to Las Vegas on Saturday for International Fight Week featuring two title fights and one of the UFC’s most outspoken stars battling for a shot at future gold.

In a feature bout on the night, Ben Askren takes on Jorge Masvidal in a potential No. 1 contender’s bout. In the co-main event, Amanda Nunes defends her bantamweight title against former champion Holly Holm. And in the main event, Jon Jones puts his light heavyweight title on the line against vicious knockout artist Thiago Santos.

It’s the biggest night on the MMA betting calendar, with plenty of action for fans of UFC betting to consider. Let’s break it all down.

Simply put, Jon Jones is the most talented fighter to have ever walked the Earth. Whether he is “The Greatest” is substantially more difficult question to answer, but few would argue with Jones’ incredible and expansive list of skills. Make no “Bones” about it, Jones is better than almost everyone, at almost everything.

Jones is a terrific outfighter (though that’s probably his worst area), using low side kicks and jabs to maintain a healthy distance between himself and his opponent. He is also a monster from top-position with some of the most devastating ground-and-pound in the sport.


Plus at 6-foot-4 with an 84-inch reach, Jones has enormous physical advantages over nearly everyone he fights. Jones is a Swiss-Army knife of lethality, and his ability to pick and choose which of these aspects to exploit has made him one of the most dominant fighters of all time.

On the other side of the cage from him, Thiago Santos is a much more straightforward fighter. Though “Marreta” is a BJJ black belt, he didn’t fight his way to a title shot on the back of superior grappling chops. Marreta - which translates to sledgehammer - is just that as a fighter, a brutal force of concussive power.

He throws aggressive, unpredictable strikes and if they connect, it’s lights out. That style makes him a great action fighter but easy pickings for a fighter the likes of Jones.

888sport currently has Jones as a 17/100 (1/17) favorite with Santos at 17/4 (5.25), and those odds don’t indicate the reality of the situation here. Though a good fighter in his own right, Santos is going up against probably the best of all time, in his prime. 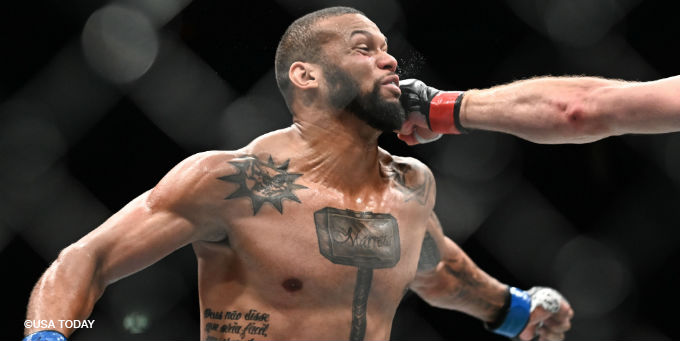 On the other hand, if you think Jones continues his reign of terror, Jones by KO/TKO is only 19/20 (1.95), a strong possible outcome for the man with the nastiest elbows in MMA.

Since moving to American Top Team in 2015, Amanda Nunes has been unstoppable, winning eight straight, including claiming two UFC titles and cementing herself as the unquestioned WMMA GOAT.

Nunes game has two core pillars: power and aggressiveness. In her last fight, she became the first woman to knock out Cris Cyborg by coming across the cage and just barnstorming the most feared woman in the world. That has always been Nunes at her best, throwing with bad intentions with no concern for how her cardio might hold up.


It had been awhile since we’d seen that version of Nunes less now though as she has started using more focused game plans and letting the stoppages come to her, and we can probably expect a return to her more tempered style this weekend, given her opponent.

Like Nunes, Holly Holm is one of the greatest female mixed martial artists ever. A former professional boxer with a gaudy record, Holm has been highly successful transitioning to MMA, and has picked up a full skill set along the way, complete with powerful kicks and a serviceable grappling game.

Her issue coming into this fight is that she has never been a tremendous finisher and she is facing one of the most powerful offensive forces in MMA today. 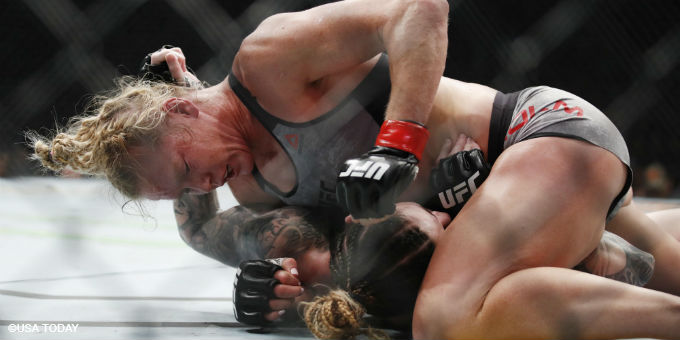 888Sport has Nunes as a 2/7 (1.29) favorite with the comeback on Holm at 11/4 (3.75), and it’s not surprising why. Nunes is coming off one of the most sensational wins in MMA history and Holm, for all her accolades, is 2-4 in her last six fights. More to the point, Nunes is just better than Holm at almost everything.

For Holm to win this, it will take excellent game-planning and some real veteran savvy. She has the tools but by far the most likely outcome is a Nunes win. Along those lines, Nunes by Decision is 5/2 (3.50), and given that Holm has only been stopped once in her career, that may not be a bad bet.

The other side of that coin is that Nunes has in fact been stopped a couple of times in her career, and Holm by KO/TKO is 7/1 (8.00), something worth considering for Holm backers.

A former national champion wrestler, turned Olympic wrestler, Ben Askren racked up titles outside the UFC after moving into MMA.

Having only recently joined the premier MMA organization in the world, he’s made up for lost time by quickly becoming one of the hottest commodities in the sport - an impressive feat when you consider that Askren’s style is among the least fan-friendly in MMA as he is entirely a grappler, with little power in his strikes and few submission in his repertoire.

Like Askren, Masvidal has only recently seen his star blossom, though unlike “Funky,” Masvidal has been competing in the UFC for quite some time. One of the most perennially underrated fighters in the sport, Masvidal has finally put together a real run towards a title on the back of a complete game and increasing KO power.

Currently, the odds favor Askren to get the takedowns, as 888Sport has him listed as a 2/5 (1.40) favorite with the comeback on Masvidal at 47/25 (2.88), and that makes sense given his pedigree. But I warn you not to count out Masvidal.

“Gamebred” is just that, and his savvy on the feet could give Askren huge problems as he tries to get inside to shoot for the takedowns.