Saturday morning at the Ericsson Globe Arena in Stockholm Sweden, the UFC returns to action with Fight Night 153 (or UFC on ESPN+ 11). The main event features a light heavyweight contest between Alexander Gustafsson and Anthony Smith, the two most recent challengers for Jon Jones’ belt.

Both Gustafsson and Smith came up short in their title bids and both are looking to put themselves right back in title contention with a big win this weekend. Let’s check out UFC betting odds for who to bet on.

Alexander Gustafsson is among the most skilled light heavyweights currently competing. Blessed with enormous size and length, Gustafsson has built a striking game around maximizing these tools, keeping range with active footwork and throwing in combinations from distance. He is also an adept wrestler, timing shots excellently and more than willing to mix his style up if the striking isn’t going his way.

Smith is also a talented light heavyweight, though in different ways than Gustafsson. Smith is more a power-punching brawler, though to call him a brawler isn’t quite right. When he is sticking to a game plan, he does not brawl but prefers to pressure; however, it’s not all that difficult to draw Smith into a sloppier fight.

Smith should try and avoid that though so he can pressure Gustafsson consistently to take advantage of the Swedish fighter’s bad footwork and land the big shots he needs to win.

Alexander Gustafsson is an elite fighter in a difficult position. Gustafsson has now come up short twice against Jon Jones, leaving him in the Rich Franklin Zone - better than almost all of his contemporaries but not good enough to beat the dominant champion. Franklin, after losing to Anderson Silva the second time, went 5-4 before retiring. 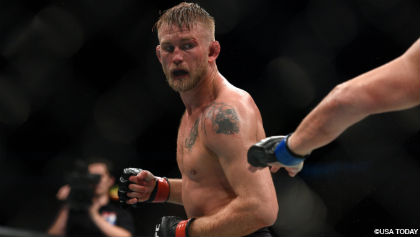 It’ll be interesting to see if that same sort of listlessness infects Gustafsson, who, on paper at least, should win this fight.

From a technical standpoint, Gustafsson should be favored, and he is at 33/100 per 888Sport with the comeback on Smith at 49/20. Gustafsson has the edges in most of the metrics: He’s longer than Smith, he throws more volume, he has beaten better opposition and he has better cardio and more diverse skills. But the question of motivation is a serious one coming into this fight and that isn’t in question for Smith.

Though he may be a less talented fighter than Gustafsson, Smith only recently has tasted the upper echelon of MMA and has to believe he could work his way back to a title shot. That and his KO power may carry him to victory in enemy territory. It certainly is enough to think that Gustafsson as a -305 favorite is far too high.

Smith can box with Gustafsson and has the power advantage and for those reasons alone I like him as a straight underdog bet at 49/20 with 888Sport.

There are also a few notable MMA betting props to keep an eye on. Should Smith author the upset, it would likely be an early KO as Smith tends to fade down the stretch. Smith in Round 1 is 15/2 per 888Sport and Smith in Round 2 at 12/1 are both worth small flyer bets. Along those lines, you can also juice the value on Smith by betting him by KO/TKO at 4/1 with Karamba instead of the straight underdog line.

Conversely, since Gustafsson still probably should win the fight, Gustafsson by Decision at +225 is a decent hedge, or you could throw down scratch on Gustafsson to win in Round 4 at 13/1 or Round 5 at 18/1 at MansionBet just in case Smith’s cardio truly fails him.