Bettors Defy Polls To Back Donald Trump 2020 US Election Win

Donald Trump is attracting the most interest when it comes to politics betting in the lead-up to the November 3 US election – despite polls suggesting he will lose to Joe Biden.

Trump, 74, is embattled in a bid to remain in the White House as his poll ratings nosedive.

The sitting president has endured a miserable lead-up to the vote following the coronavirus outbreak and severe economic decline in America.

Yet while his rival Biden enjoys a healthy poll lead of over eight points, bettors are being increasingly attracted to the Trump odds on offer.

Interestingly, there is a real split between the polls and the odds leading into this election.

Trump is trailing in both metrics, yet when we look at betting data it’s clear that more bettors are backing him to win the vote. 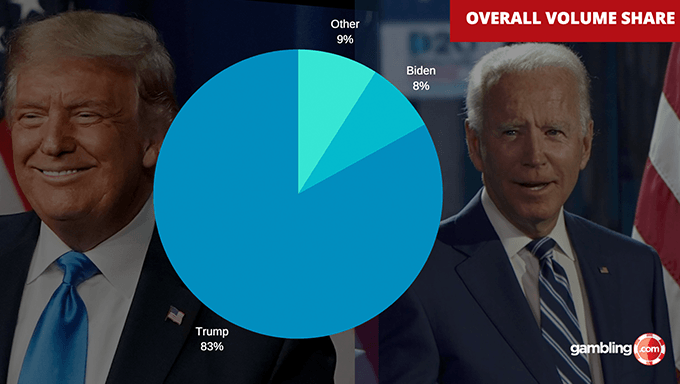 The businessman currently boasts 83% of all bets placed on Paddy Power’s 2020 US election market. Biden, meanwhile, has just 8% of bets to his name, while other candidates – such as Mike Pence and Bernie Sanders – make up 9%.

There are a number of reasons why this may be the case. One is that Trump’s odds have fluttered around 6/4 and 5/4 for months, making him a tempting bet to win a two-horse race.

What’s more, bettors who initially backed Biden to take the White House when the Democrat was still battling to earn his part nomination may now be backing his rival to cover some of their risk. 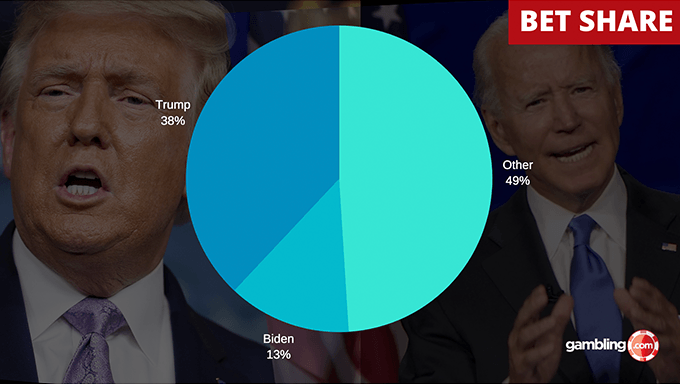 Yet what the data also makes clear is that bettors are backing Trump in numbers, but not in big bets.

Only 38% of the bet share is actually directed to the incumbent, while the majority goes on names not even in the race.

Trump still has a few months to reclaim the poll deficit he is currently enduring.

But for him to do that the president needs to target the swing states that often decide US elections.

Biden looks set to win Florida, Pennsylvania and Michigan, while Trump has a healthy poll advantage in Texas and South Carolina.

But the Republicans will be targeting the floating swing states of North Carolina, Ohio and Arizona in the coming months as they battle for electoral college seats.

What’s more, Biden appears to be underperforming in some of the key battleground states compared to Hilary Clinton at this point of the 2016 election battle.

The next big test for both candidates will be the first live TV debate in Ohio on September 29.

Biden already has the advantage of having undertaken 11 Democratic Nomination debates over the course of the past year but Trump will hope to target his rival’s policies here.