Can Manchester United Get Back Into The Champions League?

Manchester United prepare for their Europa League home tie with Partizan Belgrade on Thursday night knowing that playing in Europe's secondary competition could be as good as it gets in the forthcoming seasons.

Since Sir Alex Ferguson retired as manager following his 13th Premier League title in May 2013, it has been a struggle for his successors David Moyes, Louis van Gaal, Jose Mourinho and current manager Ole Gunnar Solskjaer.

Only Mourinho and van Gaal have managed a top-four finish since Ferguson's retirement and it is going to take one incredible run of results for United to qualify for the Champions League through their league position this season.

They are currently 10 points behind fourth-placed Chelsea after 11 games and are therefore 11/2 outsiders for a top-four finish.

Repeating their Europa League success of 2017 – a 5/1 chance with some online bookmakers this season – looks like being their best hope of bringing European football back to Old Trafford on Tuesday and Wednesday nights next term.

United have made their worst start to a 38-game Premier League season with last Saturday's 1-0 defeat at Bournemouth leaving them with 13 points from their first 11 games.

Their previous worst was in 2014/15 when they managed 16 points at this stage of the season and went on to finish fourth after losing just five of their remaining 27 games. 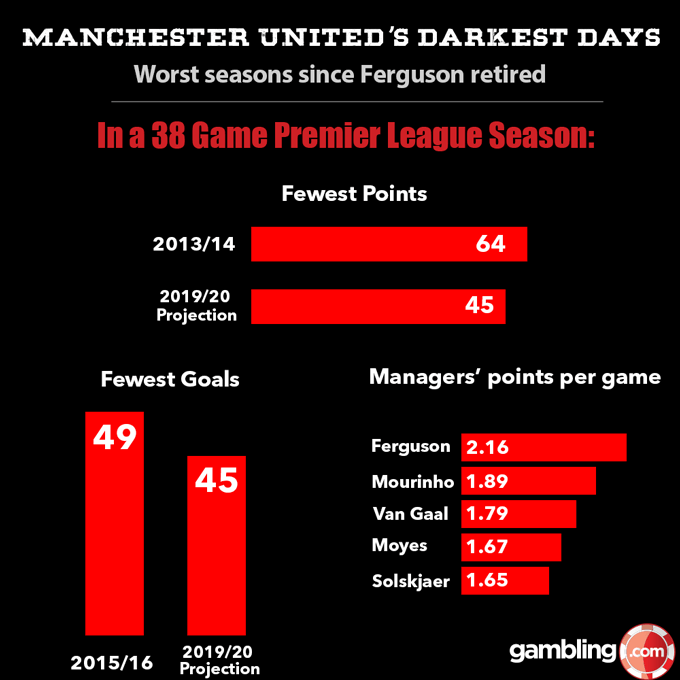 Solskjaer's side have taken an average 1.18 points per game so far this season which equates to 45 points for 38 games and that would be 19 shy of United's lowest ever points total of 64 accumulated at the end of the first season following Ferguson's retirement.

No team has qualified for the Champions League through their league position with less than the 60 points Liverpool accumulated during the 2003/04 season.

Goals remain an issue at both ends of the pitch with United on course to score just 45 goals this season which would be their fewest number of league goals since the 49 they netted in the 2015/16 campaign when they finished fifth.

Against Norwich recently, United became the first team to score 2,000 Premier League goals and it took them just over 27 seasons to reach that milestone. At their current rate of scoring 1.18 goals per game, it will take United a further 44 campaigns to score their 4,000th goal in the 2063/64 season.

United have invested heavily in this squad, bringing centre-half Harry Maguire in from Leicester for £80m in the summer while goalkeeper David De Gea, midfielder Paul Pogba and striker Marcus Rashford will become primary targets for several top clubs in Europe if Champions League football continues to elude the Red Devils.

Ron Atkinson's sacking on November 6, 1987 remains the earliest United have sacked a manager since the war and unless there is a vast improvement quickly, Solskjaer could become the second quickest dismissal in the club's history. 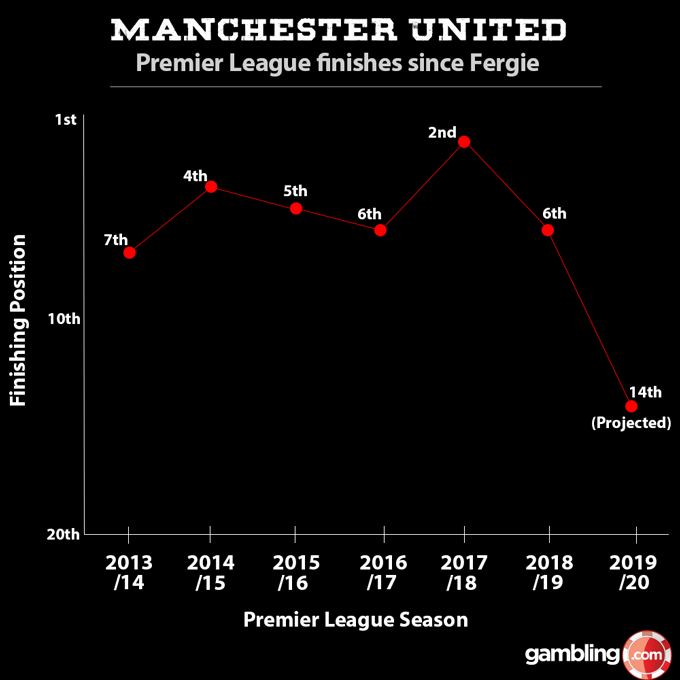 With United's best route to securing Champions League football being via the Europa League, their home game with Partizan is arguably their most important game of the season so far, where victory would secure them a spot in the knockout stage.

Former United and England defender Paul Parker agrees with the bookmakers that the Europa League is now their best chance of getting back into the Champions League, given the number of points on the league board at this stage.

“Winning the Europa League is the only way United will get back into the Champions League next season,” he told Gambling.com.

“I’d like to see them improve the squad in January but, realistically, there are far better sides than Manchester United in the Premier League and that’s not going to change much in one transfer window.

“For now, they need to focus on getting to the knockout stage of the Europa League, because once they get that far they’ll get very competitive and other clubs will fear the name.”

With the January transfer window approaching, the transfer rumour mill is beginning to spin, but with United at a low ebb their focus may actually be on retaining key players.

Parker is not overly concerned by the prospect of big-name departures, insisting they’d be lucky to have suitors given how badly the team have been performing of late.

He added: “The prospect of not playing Champions League football will be a massive concern for Paul Pogba, David de Gea and Marcus Rashford in particular, but if they’re thinking of moving on they’d be wise to keep it to themselves because they’re not doing their jobs consistently enough.

“If they were to start hinting at moves, that would not go down too well with the club or the fanbase. There are plenty of Champions League sides out there who would no doubt take those players, but most of them would only be last-16 or quarter-final teams – not consistent semi-finalists and finalists like Real Madrid and Barcelona.

“They just haven’t been good enough. As good as Rashford can be, prior to that free-kick he scored against Chelsea there was a lot of negativity around his performances this season.

“Anthony Martial has been in and out of form, very inconsistent and injured for long periods too. And as for De Gea, his form has dropped immensely. He’s nowhere near the goalkeeper he was 12 months ago. It wasn’t long ago that he was the best in the world in his position, but he’s been poor, as have most of the team.” 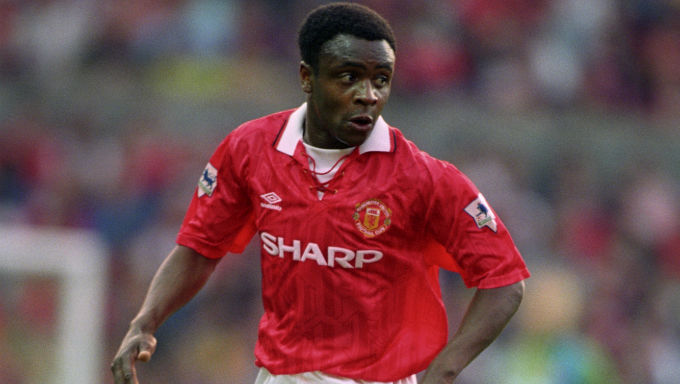 For Parker, United’s poor league form is only somewhat down to Solskjaer, but he insists the club hierarchy must stand by their decision to give him the job on a permanent basis, otherwise the club may never emerge from this crisis with their reputation restored.

“I think when you look at the stats at this moment in time, 1.18 points per game is not a good enough average, and on the basis of that perhaps he’s not the right man to manage the side,” said the former full-back, who won two Premier League titles during a five-year spell at Old Trafford.

“But, realistically, who can come in and do a better job? No one will be hurting more than Solskjaer and he will be determined to fix things. There’s no one else out there who would have that same desire because he’s a Manchester United man.

“If they sack him now, Ed Woodward would have to come up with a whole new philosophy and spend another £600million on new players. Where does it end?”

Former Juventus boss Max Allegri is the current favourite to be Manchester United’s next manager at 5/2, while Tottenham boss Mauricio Pochettino is second favourite at 4/1, but Parker claims any takers would be entering a minefield.

He said: “I know Allegri has been mentioned as a possible replacement, Pochettino and Laurent Blanc too, but the problem is they’ll just be walking into the same scenario. Journalists can link these names to the job, but does anyone really know if they would even want the job?

“They might not want to risk tarnishing their reputation because everyone knows by now how difficult a job it is.

“Ole knows what he was getting himself into. He knew the stipulations, now he’s just got to get on with it. Jose Mourinho knew the stipulations too, and he was all too keen to let everyone know how difficult it was, and in the end Manchester United – the business – could not continue to allow that negativity to come out and so they got rid.

“With Ole it’s different. He’s willing to suffer in silence because he loves Manchester United and he wants to turn things around to become a legend second time around. Given what he’s up against, if he can restore the club’s status in time, then that has to be seen as an enormous triumph.”

United host Partizan, who are managed by former Aston Villa striker Savo Milosevic, at Old Trafford on Thursday evening before facing Brighton at home in the Premier League on Sunday.

© PA
5 Of The Biggest Ever Upsets At The Euros

© PA
The Hole-in-One Gang: How Golf Bettors Beat The Bookies
© USA Today
Massachusetts Lawmakers Discuss Multiple Sports Betting Bills
By continuing to use our site you agree to us using cookies in accordance with our Cookie Policy .
Got It
×