Cheltenham crowns champions, Aintree provides redemption, and Punchestown cements legend. Winning at any is enough for some, but landing a double, or even the treble, can be done by only the best.

It's that unique test of peaking in March for Cheltenham, after a tough winter, recovering for Aintree a couple of weeks later, and then again, for Punchestown at season's end.

At the 2019 Punchestown Festival there are no treble-seekers, but there are 10 Cheltenham Festival winners and 11 Aintree scorers, all bidding to net that coveted double.

The most coveted of them all is the Cheltenham-Punchestown double, so we've taken a look back at some of the best renditions of that feat - and we haven't forgotten the few mighty three-timers.

The cat was already out of the bag; Brian Kearney's £17,000 buy was the bargain of the century, but the son of Moscow Society, though great, was not flawless.

He'd shown bravery beyond sense over fences and paid the price with two falls in five runs. So having been a very short favourite for all of his chase outings before the Arkle Novices' Chase at Cheltenham, suddenly he was 11/2 and drifting.

This was the day he fell in love with Cheltenham, and the moment that epitomises the horse was four fences out, at the top of the hill. That's where he won the 2002 Arkle, with a gasping leap out of jockey Barry Geraghty's hands. It was flying. 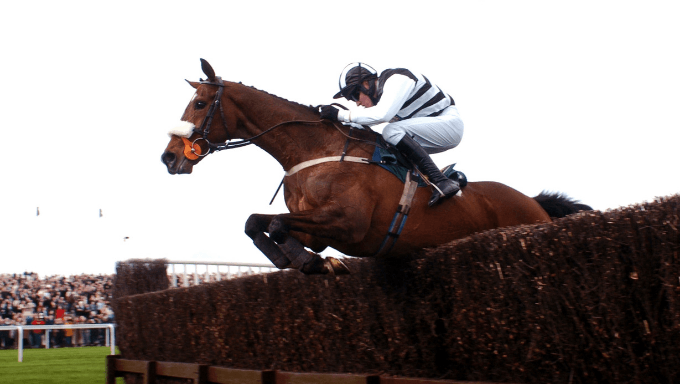 The favourite, Seebald, had no answer for the Jessica Harrington-trained star and was not for a second beating at Punchestown. In fact, only one of the 12 Arkle runners fancied taking him on again, Assessed - the horse who had benefitted from his early exit a race before Cheltenham.

He was rewarded with third in what is now the Ryanair Novice Chase, Moscow Flyer romping to a seven-length win at odds of 2/5.

Three years later he would be denied the Cheltenham-Aintree-Punchestown treble by a short-head, Rathgar Beau halting his hat-trick at Punchestown.

The Cheltenham-Punchestown double he did win is one of the most popular, four other horses achieving it in the last 20 years; Tiutchev, Captain Chris, Un De Sceaux and Footpad. Duc Des Genievres bids to emulate them in 2019.

Punchestown began with racing over banks, walls, and ditches. It's owned by the Kildare Hunt Club and thus the racing was like hunting country.

They both shouldered mega top weights of more than 12st, but the more notable was Big Shu. His fellow double scorer Garde Champetre was owned by JP McManus and trained by the king of the banks, Enda Bolger.

His win at Cheltenham under topweight was his second, and though it was impressive to follow up under 12st 7lb, it was kinda expected of him, and his lofty connections from Limerick.

Big Shu was trained down the road by the lesser-known Peter Maher, as much of a banks race aficionado as Bolger, but with a fraction of the fire-power.

He had never brought a horse to the Cheltenham Festival before, saving everything for the banks races, but when his former Punchestown Festival winner was allotted just 10st 5lb, he could not resist.

At 14/1, Barry Cash powered the then eight-year-old to a four-length win in the 3m6f chase, earning a whopping 12st 3lb for the La Touche Cup, which was not quite as simple.

Travelling into the lead four obstacles from the line, Big Shu was clear, much of the 17-strong field have cried enough, or fallen. But the 9/2 shot was not safe, and that huge top weight began to tell.

Another Jewel and Bostons Angel closed in on the tired star all the way up the run-in, but Cash had timed it to perfection and the win came by a length and a quarter.

Nailing a Cheltenham-Punchestown double came easy as pie to Willie Mullins' mare of a lifetime, Quevega. 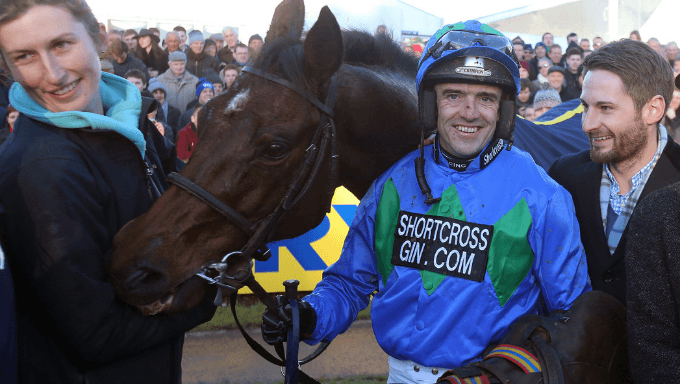 On her last ever run, unbeaten in her last nine outings, unbeaten for four years, somebody plain did not read the script.

She had, as promised, won for a record sixth time at Cheltenham, and she was the 9/10f for a fifth Punchestown Stayers' Hurdle win, but jockey Ruby Walsh found himself out of gears two hurdles out as Jetson set sail.

Quevega was going nowhere, sitting in fourth, but as they came within ear-shot of the crowds, she rallied, taking off after Jetson, all too little, too late. Then 10, she lost by a length and a quarter.

Though not in Quevega's league, Anzum and Rubhahunish also won the Punchestown Stayers' Hurdle after winning at Cheltenham.

In 1999, Anzum had defied odds of 40/1 to win the Cheltenham Stayers' Hurdle, and a year later Rubhahunish stepped up markedly on a Pertemps Handicap Hurdle victory and a Liverpool Hurdle second at Aintree.

Coming back to win anything at all after the maximum effort of winning the Cheltenham Gold Cup warrants kudos galore, but to turn up and do it six weeks later?

The race as we know it has only been around since 1999, and just three have achieved the famous Cheltenham-Punchestown Gold Cup double, Kicking King, War Of Attrition, and most recently Sizing John, who completed a prestigious treble in doing so.

The 2017 hero earned owners Ann & Alan Potts a Gold Cup a month that spring, starting with the Irish Gold Cup at Leopardstown in February, then Cheltenham in March and Punchestown in April.

Such was the trial of that magnificent feat that he has run just twice since, succumbing to injury, that just keeps niggling back.

Cheltenham Gold Cup winners often finish their season right there and then, but in 2019 we're lucky, Al Boum Photo is bound for Punchestown alright.

He's up against last year's winner Bellshill (who pulled up at Cheltenham), and Aintree winner Kemboy, whose one blot on an outstanding season came when he unseated at the first in the Cheltenham Gold Cup.

At Punchestown, we shall find out what could have been.

Is there a list of jumping greats anywhere that Hurricane Fly cannot squeeze into? George Creighton and Rose Boyd's record-setting hurdler won 26 of his 42 runs, so it's little wonder he scored two Cheltenham-Punchestown doubles. 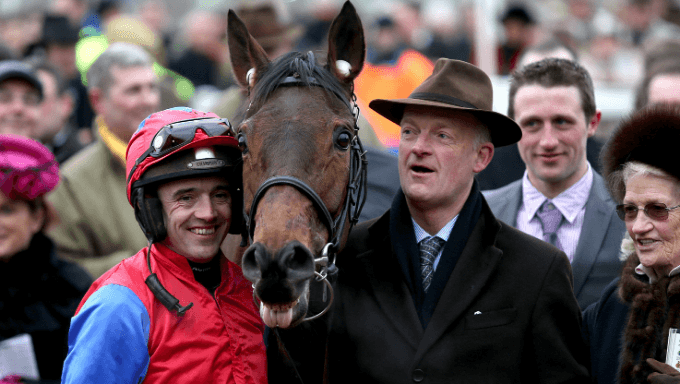 In 2011 and 2013 he won both Champion Hurdles, adding his name to a select group, including only Istabraq and Hardy Eustace (Jezki making it four in 2014).

Hurricane Fly tried to complete the double twice more and failed, and he never did run at Aintree, but really, who cares? The snarky son of Montjeu is a great among greats, nonetheless

It's one thing being a seasoned pro and banging out three wins in six weeks, at the highest level of your game, but it's marginally more impressive to get it together as a novice.

That's what Douvan did in 2016. A year earlier he'd landed one of the most popular Cheltenham-Punchestown doubles - the Supreme Novices Hurdle and Herald Champion Novice Hurdle - but this time he was over fences.

In hack canters, he sauntered to Arkle, then Maghull Novices' Chase, then Ryanair Novice Chase victories, completing perhaps the easiest Cheltenham-Aintree-Punchestown treble imaginable. He won by a combined 32 lengths.

If Douvan doesn't convince you of the calibre of athlete needed to achieve the Cheltenham-Aintree-Punchestown treble, Istabraq will - the three-time Champion Hurdle winner, whose lifesize painting hangs in Dublin airport, and whose statue stands at Cheltenham.

It was after his second Cheltenham Champion Hurdle in 1999 that he won the Aintree Hurdle, having been beaten a head by Pridwell in the race the previous year. With everything going to plan this time, owner JP McManus saw fit to continue to Punchestown, where he once more justified odds-on favouritism, the cheers of a nation willing him on.

That was the only time Istabraq ran at all three festivals in the same season.

On The Fringe created a whole new phenomenon - The Double Treble. In 2015 and 2016, he won the Cheltenham Foxhunter, the Aintree Fox Hunter (over the Grand National fences), and the Punchestown Champion Hunter Chase.

Aged 10 and 11, he became something of a celebrity, his charismatic trainer Enda Bolger and pioneering jockey Nina Carberry only adding to his appeal. Another JP McManus-owned legend.

© PA
Men in White Gloves: The Rise and Demise of The Tic-Tac Man