There’s nothing better than playoff hockey.

And as fans of NHL betting will tell you, there’s nothing better than wagering on playoff hockey.

With the last regular season games wrapping up over the weekend, we now have our clear, official look at the Stanley Cup Playoffs betting matchups.

No more speculation about who will play who. It’s time for the second season to officially begin this Wednesday.

With all of that in mind, let’s take a look at every series and who’s expected to get past the first round and clear the first hurdle in the quest for the Stanley Cup. 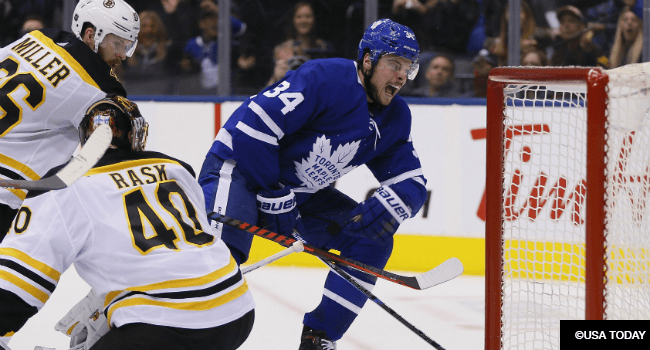 The Lightning tied the record for most regular season wins (62) in an 82-game season Saturday as they head into the playoffs as the juggernaut favorite to win the Cup. The Blue Jackets locked up their postseason berth a day earlier, and they're hot having won seven of their last eight games.

They needed every one of those wins to beat out the Canadiens for the last wild card spot, and they accomplished their short term goal of making the postseason after a trade deadline splurge. With big free agents Artemi Panarin and Sergei Bobrovsky likely leaving in the offseason, Columbus will look to make the most out of this playoff run.

The favored outcome in the series is Lightning in five games at +285.

A rematch of last season's first-round matchup, the division foes will tangle yet again for the right to face the winner of the Lightning and Blue Jackets series. Boston and Toronto have quite the playoff history with the Bruins often ending the Maple Leafs season in heartbreak in recent installments.

Boston is favored to take this series as the onus is on the Leafs to finally break free. They undoubtedly have their most talented team in a long time, but they've been wildly inconsistent throughout the season.

With the Bruins holding down home-ice advantage, the predicted outcome is Bruins in seven games at +400 making for one of the more exciting and star-studded of the first-round series.

The Stanley Cup champions start their title defense against one of the hottest teams in the NHL. The Carolina Hurricanes have set themselves apart not only with their much publicized "Storm Surge" celebrations, but with some truly exciting hockey all season long.

As exciting as it's been to watch the young Canes turn a corner this season, it's a tough ask for an organization that hasn't made the postseason since 2010 to knock off a team as deep, battle-hardened and talented as the Capitals.

That being said, it should be a fun series as the expected outcome is Caps in seven games at +410.

Barry Trotz took over a team that lost its biggest superstar in free agency and coached them all the way to the postseason. The Islanders are tough-as-nails and will likely give the Penguins all they can handle.

Trotz finally got the Capitals over the hump in last season's series win over Pittsburgh, and he'll have a shot to eliminate the Pens two years in a row with his new squad.

With Sydney Crosby and Evgeni Malkin at their core, however, the Penguins will be favored and oddsmakers list the most likely outcome as Pens in six games at +340. 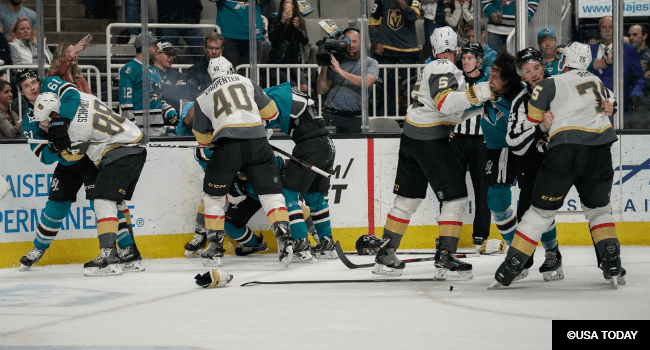 The Flames have always been a talented team and one that could be the best in the West if it could put it all together for a full season. They finally did so this year and thus head into the postseason as the top seed in the Western bracket.

Led by Johnny "Hockey" Gaudreau and Sean Monahan, who combined for 181 points, the Flames will try to prove themselves with a deep run in what's been a treacherous conference for No. 1 seeds.

The Avalanche started the season with the best line in the NHL and still may hold that distinction, though everyone knows depth is the key to a deep playoff run.

For that reason the deeper team is expected to win this series as the predicted outcome is Flames in five games at +300.

The Golden Knights shocked the world with their run to the Stanley Cup Final last season, and they showed it was no fluke as they now make their return to the playoffs in just their second season of existence.

The Sharks, however, have the scariest blueline in the NHL with Erik Karlsson and Brent Burns serving as their two-headed monster. This will be a tough one to call for most bettors as even though the Sharks are the slight favorites, it's one of the tightest series on the schedule in terms of odds.

While the Sharks have the slight edge, the most likely exact outcome according to sportsbooks is Vegas in six games at +390.

The Predators are still a beast in the postseason and they've tallied up enough first-round success over the last few years to warrant an expectation that they'll move on.

The Stars, however, are not a team to be taken lightly. Goalie Ben Bishop has been the key putting together arguably the second-best season in net behind his former teammate Andrei Vasilevskiy.

Dallas made a major addition at the trade deadline bringing in Mats Zuccarello from the Rangers, and they have plenty of offense to hang with the Predators.

Nashville still has one of the best home atmospheres in the postseason, however, and the predicted result is Preds in either five or six at +400

Finally comes the most evenly matched series of all. St. Louis' atrocious start led them to fire Mike Yeo and Craig Berube has reenergized what has always been a playoff team at its best.

How far the Blues will make it will depend on their consistency in net most likely as young Jordan Binnington will have his hands full in his postseason debut against a stacked Jets lineup.

In another tough one to call, Blues in six games at +360 is the favored outcome.

© PA
Liverpool's Attacking Stats Raise Questions on Future of Front Three
© PA
Florida Lawmakers Remove Online Casino Gaming from Compact
© PA
New Jersey April Sports Betting Handle Sees 13% Decline
By continuing to use our site you agree to us using cookies in accordance with our Cookie Policy .
Got It
×