John Dillon
Url copied!
© PA
The Fury-Wilder re-match is due to start at around 5am GMT on Sunday, February 23 (© PA Images)

According to Tyson Fury, he is going to perform a reverse Anthony Joshua job on Deontay Wilder in Las Vegas this week.

Now, against all perceived wisdom, Fury – the great slipper-and-slider – insists he is planning to knock out Wilder in two rounds at the MGM Grand on Saturday night.

Fury says a lot, of course. He is a ceaseless one-man, 24-hour news channel, churning out headlines, quotes, opinions, stories, insults and wisecracks on what seems like a permanent loop.

In America’s brash and glittering Sin City, all six feet nine inches of him will be occupying his natural stage.

Half of his tub-thumping performance is serious, half of it is not.

For the record, Fury has been favourite for much of the build-up, but in fight week he finds himself playing second fiddle in the odds, with William Hill easing his price to win out to 1/1, switching Wilder in to 10/11 slight favourite.

But nobody can really know what to expect until the night of the fight, when Fury, 31, will attempt for the second time to relieve Wilder of his WBC title belt following their draw in Los Angeles in December, 2018.

But this is how he has announced the game-plan he intends to follow. “In the first fight I tried to out-box him but I didn’t win. So now I am going to knock him out inside two rounds.

“The consensus is that either he knocks me out or I win on points. Usually, when people have that opinion, it goes the opposite way.”

It’s a valid observation. Apart from one hugely important fact that has convinced most observers that Fury simply cannot operate this way this Saturday evening (around 5am UK time, Sunday morning on February 23).

It is that Wilder is probably the hardest hitting heavyweight in his sport’s history. And going to war with him will probably mean that Fury becomes the 43rd knockout victim in what will be the unbeaten 34-year-old champion’s 44th fight.

That said, Fury boxed with fabulous intelligence, dexterity and elusiveness in the first meeting of this flamboyant and noisy pair.

Yet still he was twice put on the deck. Emphatically so.

Firstly, in the ninth round and then again in the 12th, when he somehow survived what looked like an instant concussion and left those at the ringside – to this day – baffled about how he managed to climb back to his feet and beat the count.

So either pathway – bold or watchful – is fraught with danger for Manchester’s self-styled Gypsy King, who is also unbeaten after 30 fights and who has already won the biggest battle of all simply by being in a fit mental state to live his daily life following his ferocious tussles with depression.

This is what makes this such a compelling collision, of course.

The heavyweight division has burst into rich technicolour life in recent years with the rise of the American Wilder, of Fury and of Britain’s WBA, IBF and WBO champion Joshua creating the stage for a truly competitive era.

So far, only the meetings between Fury and Wilder have become reality, although there will be a huge clamour for the winner to meet Joshua in a unification clash which would certainly be the richest single sporting event in history.

Believe me, however. Don’t hold your breath on that one. Whatever happens in Las Vegas, Joshua’s career plan is mapped out for at least his next two dates.

The first will be against the Bulgarian Kubrat Pulev, probably at the new Tottenham Hotspur stadium in June.

Then he is slated to meet the former cruiserweight champion turned heavyweight, Alexander Usyk, with whom Joshua shares a promoter, Eddie Hearn.

So for now, forget about what might come next and concentrate solely on the spectacle, intrigue and sheer dazzling immensity of what is going to unfold along The Strip throughout all of this week.

Many believed Fury was robbed by the judging decision in LA.

Ask around the sport 15 months later and there is a feeling that Fury might have offered all that he can in the first meeting while Wilder still retains more in his locker.

The BBC’s highly-respected voice of boxing Steve Bunce told me last week: “I fancied Fury the first time. I fancy him again, but less so this time.

“In my opinion, the winner in Vegas will be the guy who fights better than he did last time

“We saw the best Fury before but not the best Wilder. That's my argument. 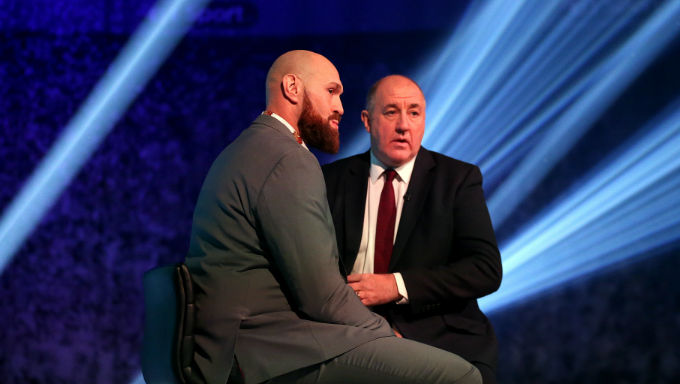 “Wilder cannot make massive changes after all these years but, let's be honest, he's just going to look for Fury's head with his right hand.

“What Wilder says is that the first round this time is really round 13.

“He says he found his range in round nine of the first fight when he first put Fury down – and then again in round 12.

“Now he says he won't have to spend eight rounds working Fury out and setting him up.”

Both men have fought twice since their initial meeting.

Fury scored a round two knockout of the lightly-regarded Tom Schwarz and then made much harder work of beating Otto Wallin by unanimous decision.

Then after being out-boxed by the Cuban veteran Luis Ortiz in Las Vegas last November, he pulled out another immense one-punch knockout to end the debate in the seventh round.

Fury Has A New Trainer

The differing factor this time around is that Fury has ditched trainer Ben Davison and teamed up with Detroit’s Javan “Sugar” Hill, whom he says will make him more ready to go hunting for Wilder and has also encouraged him to add more weight to his huge frame.

There is also a potential worry about a re-opening of the nasty 24-stitch cut Fury suffered against Wallin last September, although Bunce – who will co-commentate on the night for BT Sport – also told me: “I saw him before Christmas and the cut looked great. It’s only a factor if he worries about it. And Fury is going in to this fight without any demons.

“Wilder will be smarter though. He will look for the big knockout, of course.

“But he boxed smartly when he beat Breazeale last year. It only lasted a round but he worked well to set him up first. He was smart against Ortiz, too.”

He said: “In the first fight, we saw Tyson at his very best.

“But Wilder was having one of his worst nights. So I have to go with Wilder by stoppage this time.”

With Joshua’s plans seemingly tied up for some time, there has already been talk of a third fight between Fury and Wilder.

If it is thrilling enough on February 22nd in Las Vegas, it is a fair possibility. This second date is set to do big pay-per-view numbers in the US and this side of the Atlantic.

There is a huge X-Factor at work because nobody really knows what to expect – at least from Fury, anyway.

From Wilder, of course, the public will anticipate right-handed, concussive mayhem. From Fury, we could get a front-foot performance. Or we could get another exhibition of his superb boxing skill and intelligence.

He constantly springs surprises. But in my view, this will end as it so nearly did last time – with Wilder claiming a stoppage victory late in the fight.

The Fix: Why Jake LaMotta Threw His 1947 Fight With Billy Fox

Why Kovalev Is A Live, Dangerous Fight For Belt King Canelo

UK’s Next Wave of Heavyweight Favourites on Collision Course