Frankie Dettori had bookmakers fearing one of the biggest ever payouts in the history of horse racing betting after a stunning 449/1 four-timer in the first four races on Day 3 of Royal Ascot.

Memories of Dettori's stunning seven-timer in 1996 came flooding back as the Italian sent bookies into panic mode with each passing victory.

Dettori opened the afternoon with victory on the Simon Crisford-trained A'Ali (5/1) in the Norfolk Stakes and quickly doubled by steering Sangarius to a brilliant two-and-a-quarter length victory in the Hampton Court Stakes.

However, it was the victory of 4/1 second-favourite Star Catcher in the Ribblesdale Stakes, completing a fifth Royal Ascot treble for Dettori, that really had bookmakers sweating as the prospect of one of the biggest payouts in the history of the sport loomed. 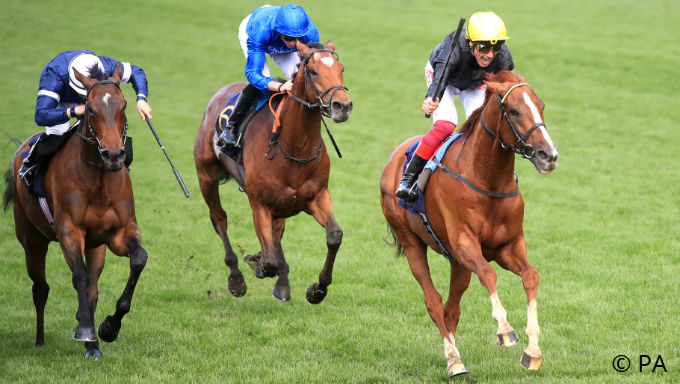 Grim Day Could Have Been Worse for Bookies

Paul Binfield of Paddy Power summed up the mood among the layers, saying: “This is absolutely horrific, and if Frankie’s next two mounts win, it’s the biggest pay out we’ve ever had.”

Even-money favourite Stradivarius hit the bookies for six in the Gold Cup, sparking scenes of jubilation as the prospect of Dettori going through the card became a distinct possibility.

However, Harry Bentley came to the layer's rescue as his mount Biometric overhauled Dettori and Turgenev, who hit a low of 4/11 (-275) on the exchanges, in the final half-furlong of the Britannia Stakes. It was a result that left bookmakers breathing the biggest sigh of relief.

Binfield added: “I’m not sure if we’ve got enough cash left in the expenses budget, but hopefully the ‘powers that be’ will be sending a bunch of flowers and a bottle of champers to Ralph Beckett and Harry Bentley.”

“We suffered some significant losses on the Frankie quartet, but even after Turgenev was cruelly defeated in the Britannia, if Questionare had won the last race it would have been one of the worst three days in the history of the company.”