How Average Driving Distance Has Evolved in Golf Since 1980

There’s a saying in golf that goes: ‘Drive for show, putt for dough’.

The quote is attributed to South African Bobby Locke and it refers to a player's ability to be able to drive the ball accurately off the tee, to give them a chance of carding a birdie or better on long par 5 holes.

Driving is just as important as putting and the top players use their course management skills to land the ball exactly where they want to so they can challenge for titles on a regular basis.

Earlier this year, Bryson DeChambeau won the Rocket Mortgage Classic on the PGA Tour in Detroit to climb to seventh in the world and he followed it up with his first Major success at the U.S. Open, putting him sixth in the rankings.

The 26-year-old has made major changes to his game to land his first Major and largely has his Cobra King Speedzone driver to thank for the best year of his career so far. Furthermore, in the last 12 months the Californian has deliberately put on over three stone in weight in order to become the game's most powerful hitter. And it worked a treat in Detroit in particular as he picked up 11 of his 23 shots on the par fives thanks to his powerful hitting off the tee.

DeChambeau topped the 2020 PGA Tour in distance off the tee with an average of 322.1 yards and leads the 2021 chart with a whopping 344.4 average at the time of writing. With golfers constantly trying to find new ways to gain an advantage of their rivals, it's no wonder manufacturers continue to develop clubs that they hope will help more players win Majors.

We've seen a number of famous drivers introduced to the sport over the years such as the 'Pittsburgh Persimmon' in the 1980s, 'Big Bertha' in the 1990s right up to the Cobra range DeChambeau and others currently have in their bags.

It's no surprise then that DeChambeau's odds of winning the Masters have been halved by bookmakers over the past two months. Striking the ball regularly over 400 yards makes the American compelling to watch and it shows how far golf has come over the years.

In the 1980s, if you hit a drive over 270 yards, you were considered a big-hitter. Only a handful of players including 18-time Major winner Jack Nicklaus could hit the ball that far.

Nowadays, hitting 270 yards off the tee will get a golfer nowhere near the top of the leaderboard. Andrew Putnam finished the 2020 PGA Tour with the lowest average drive (277.9) and is currently ranked 161 in the world. 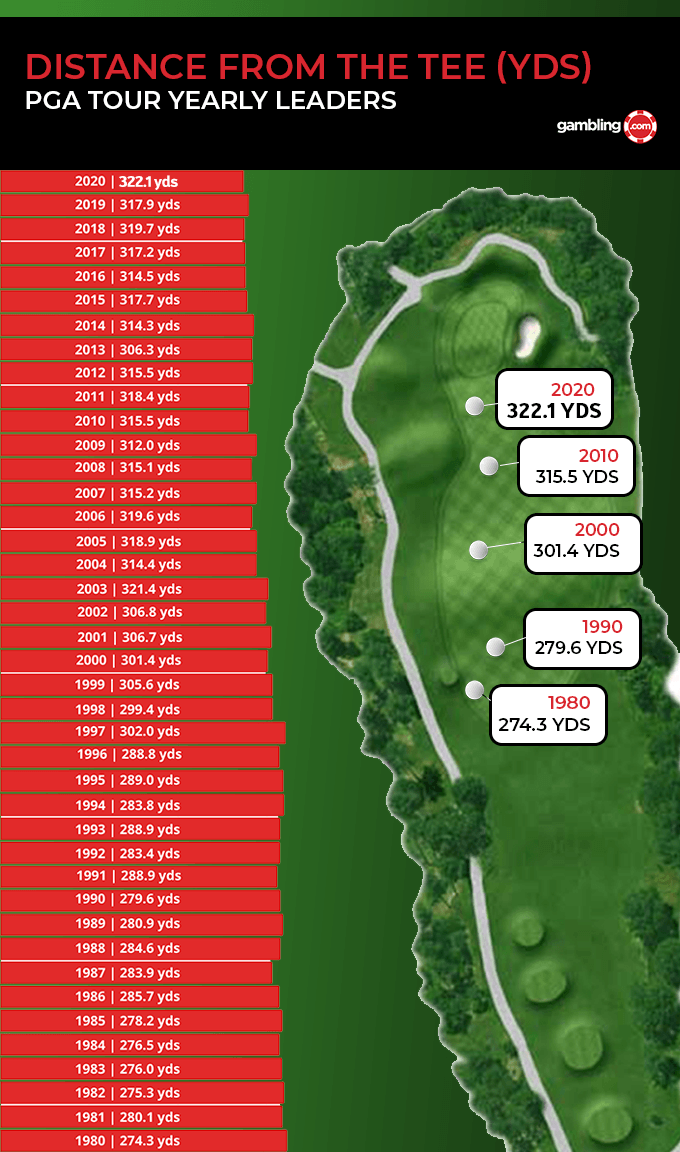 At the start of the new millennium, John Daly was considered the game's longest hitter with his 'grip it and rip it' attitude which helped him win the PGA Championship in 1991 and the Open in 1995.

'Long John' as Daly was nicknamed, topped the drive distance charts on the PGA Tour for all but one year between 1991 and 2002 when Davis Love III dethroned Daly in 1994 with an average distance of 283.8 yards off the tee.

The advancement in golf clubs and balls has left golf courses no choice but to change with the times.

St Andrew's, the home of golf, has been extended by 371 yards since it hosted the 1964 Open Championship. At Augusta, which remains the only one of the four Majors to be played on the same course every year, has seen its total yards increased from 6,980 in 1970 to 7,768 for this year's tournament.

The longest course on the PGA Tour this year was the South Course at Torrey Pines which hosted the Farmers Insurance Open in January. Australian Marc Leishman won the event and he is one of the 72 players who averaged 300 yards or more off the tee in 2020.

American Justin Thomas hit the longest drive on the PGA Tour this year with a 449-yard tee shot on the second hole of his final round in the WGC-Mexico event in February which helped him finish tied for sixth place.

Anyone can hit a monster drive off the tee, especially if there is a strong wind behind them. But to be successful and to be a perennial winner, golfers have to be able to avoid the hazards strategically placed around the course by golf clubhouses to win back control from the players.

As the number of players who average 300.0 yards or more for this Eason (2021) currently stands at 121, the battle between club manufacturers and course designers looks set to continue for many years to come.

The question remains, how long will it be before the leading golfers are averaging 350 yards off the tee?

© PA
The Hole-in-One Gang: How Golf Bettors Beat The Bookies
Woods Misses the Cut, Miffs Backers at the PGA Championship
Woods No Longer Favorite to Win 2019 PGA Championship
Tiger Woods Now Favored to Win in Every Golf Major in 2019

© PA
5 Outsiders That Could Outrun Their Grand National 2021 Odds
© PA
London Mayoral Odds Say Sadiq Khan Landslide Not Guaranteed
By continuing to use our site you agree to us using cookies in accordance with our Cookie Policy .
Got It
×