Bookies pictured at Leopardstown in 2001, the beginning of a boom for business after decades of levy woe (© PA Images)

In October 2019, Ireland’s Minister for Finance, Paschal Donohoe, announced during his 2020 Budget speech: “In recognition of the difficulties experienced by small independent bookmakers I am introducing a relief from betting duty and betting intermediary duty up to a limit of €50,000 per calendar year.”

A tax relief on betting was not exactly a surprise as earlier in the year the Finance Department’s tax strategy group had suggested a scheme to bring relief of €2million a year to small independent bookmakers struggling to compete against bigger chains such as Paddy Power, Ladbrokes and even the biggest independent operator, Boylesports.

The move means that land-based ‘shop bookmakers’ will not have to pay the current two per cent tax on the first €50,000 in wagers that they take. This will be a drop in the ocean for the major firms with multiple shops but a shot in the arm for one-shop operators.

But Ireland’s two per cent betting tax laws only came into place in 2019 when predictions at the time suggested the increase would raise €95m for the State’s coffers during the year. Beforehand the tax rate had been set at one per cent.

At the time the doubling in duty was described as a “black day” by the Irish Bookmakers Association (IBA) who called it a “retrograde step” and declared the minister responsible had “just signed P45s for over 1,500 jobs in the independent bookmaking sector.” 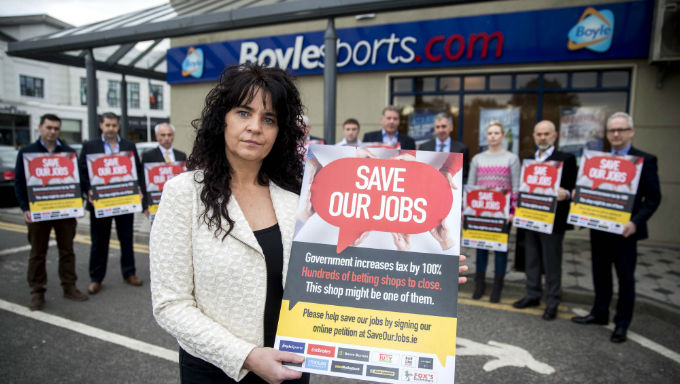 Sharon Byrne, Irish Bookmakers Association Chairperson, with Irish bookmakers at the launch of their ‘Save Our Jobs’ campaign (© PA Images)

The core of the problem lay with tax on turnover being absorbed by bookmakers and not imposed on punters when placing their bet (a wager tax), or taken from returns on winning bets. Traditionally, punters paid the proverbial price for government duty in this way and that was the case until 2002.

Beforehand, shop betting tax had been five per cent and had halved in size twice, relatively quickly, as tax free off-shore betting and then tax free online betting posed a threat to Irish businesses. It was also conceded reduced taxes would increase turnover.

You have read that right, prior to 1986 the tax on bets placed in betting offices was an enormous 20 per cent. Furthermore, it was collected as a ‘paid-on’ wager tax meaning the placement of a IR£100 bet on an even-money shot would cost £120 and if it were to win the returns would be £200.

And amongst other facts you might not know: Betting shops in the Republic of Ireland have never featured Fixed Odds Betting Terminals (FOBTs) to give them turnover and profits that are not subject to over-the-counter taxation. Additionally, Irish betting shops pre-date their British counterparts by a remarkable 35 years.

Indeed, betting offices were licensed by the Irish Free State Government way back in 1926 when they initially raised revenue from the duty of five per cent on turnover. It took their British counterparts a further three decades to shake off their concerns about the possible negative social impact of high street betting and begin issuing licences for shops in 1961.

But while Ireland stole a march on the rest of the world (49 states of America by over 90 years) in offering legalised bookmaking, Irish punters have had a roller coaster century when it comes to the betting tax they have been asked to pay.

The enormous 20 per cent betting tax for shop punters was introduced in 1975 having begun life at five and having risen to 7.5 and then 10 percent.

Concurrently, people punting on course also saw tax hikes. Successive austerity budgets had seen on course tax creep up from five per cent to six and on to 7.5 per cent. Unlike betting shops this was collected from winning bet returns and not applied to wagers on bet placement.

On course betting tax had begun in 1946 after the Government established the Racing Board (1945) designed to improve horse breeding and racing and their remit also included the financing of racing from levies received from betting.

But the on course hikes and a diabolical doubling in duty was the catastrophe many predicted. Official recorded betting turnover nosedived as betting went underground. 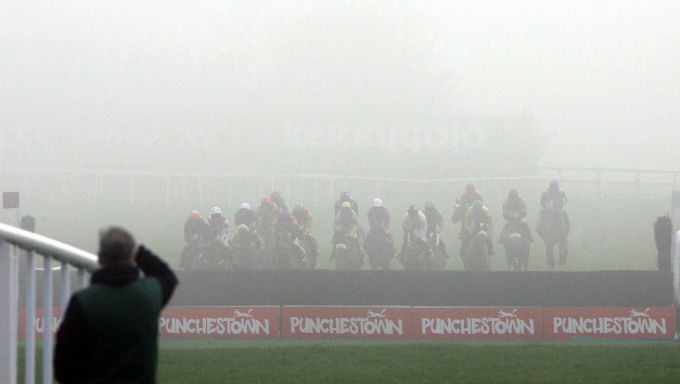 Illicit bookmaking simply thrived as less and less bets were placed legally or were simply not recorded. As turnover declined, racing was brought to its knees as it was dependant on revenue collected from the Government.

Empty betting shops and on-course pitches where £100 bets often entered the leger as a £10 wager did a lot of damage to the sport of horse racing in Ireland at the start of the 80’s and it showed on the International stage.

The resultant poor prize-money meant a depleted breeding industry and by the end of the decade Irish runners in the UK were not only rare, they were also inferior. Between 1987, 1988 and 1989 inclusive Ireland enjoyed just two winners at the Cheltenham Festival.

The slump caused by 20 per cent betting tax cannot be underestimated. But after widespread outcry from bookmakers – the influential Terry Rogers being a notable opponent and lobbyist – and punters, common sense eventually ruled.

Tax was back down to a more palatable 10 per cent during the late 80’s and for most of the 90’s in-line with British bookmakers. Meanwhile, the Irish Horse Racing Authority replaced the Racing Board in 1994 and a semi-state body called Horse Racing Ireland (HRI) was set up in 2001 to continue the development of the sector.

To this day, 2001 legislation sees tax proceeds distributed as 80% for the thoroughbred industry through HRI and 20% for greyhound racing through Bord na gCon (Irish Greyhound Board).

Let The Good Times Roll Back

By 1999, the Minister for Finance, Charlie McCreevy abolished betting tax for on-course Irish bookmakers and reduced off-course betting shops tax levels from 10 per cent to 5 per cent.

It’s been widely reported that he “saw the internet coming”. If he did he showed great foresight but whatever his reasoning he clearly reinvigorated Irish sports betting and the boom times were back in the business after almost 30 years.

And while recession was to bite and the economy went on a downward roller-coaster ride, the remnants of the glory days remained in play and allowed Ireland’s rapid ascent in national hunt racing to plateaux.

Ireland’s sporting businessmen conspired to give the nation a remarkable 19 race winners at the 2017 Cheltenham Festival. Not bad for a small country that was crushed by spiralling gambling taxes 30 years beforehand.

The 11 Best Jumps Horses Of The Decade