How Mbappe and Haaland Compare To Messi and Ronaldo So Far

For the last 15 years, football fans across the world have been spoiled by the rivalry between Cristiano Ronaldo and Lionel Messi.

The pair have pushed each other to levels of goalscoring not seen since Pele made football the universal sport it is today.

If you watched a game Pele played in and he didn't score, it was deemed a collector's item given how rare that happened.

The same can be said about the consistent goalscoring form of Ronaldo and Messi. The debate as to who is the better player will continue for many years after their careers come to an end.

And sadly, both players are in the twilight of their glittering careers.

Ronaldo is still scoring goals for fun with Juventus and Portugal at the age of 35 while 33-year-old Messi is still celebrating goals in the Barcelona colours, despite speculation linking him with an exit from the Nou Camp prior to the start of the current La Liga season.

For the last few years, football supporters across the globe were wondering if we would ever see a rivalry like theirs again.

The answer, potentially, is yes.

In the blue corner is 21-year-old Kylian Mbappe. Already a World Cup winner with France, Mbappe is the rising star of Les Blues.

In the opposite corner is 20-year-old Norwegian scoring machine Erling Braut Haaland who, last season, became the first teenager to score 10 Champions League goals in a single campaign.

Indeed, the only other player to score 10 Champions League goals as a teenager was Mbappe, but that was over two seasons.

If Mbappe and Haaland avoid serious injuries, which Ronaldo and Messi have managed to do for the majority of their careers, then we could be looking at another fascinating rivalry over the next 15 years or so.

One of the factors that made the rivalry between Ronaldo and Messi so special and compelling to watch was the fact that they played against each other in one of the greatest fixtures in world football – Ronaldo for Real Madrid, Messi for Barcelona.

Right now, the world will have to wait for Haaland and Mbappe to do the same.

But if history has taught us anything over the years, supporters of these two clubs demand to have the world's best players playing for them so there is a good chance both these players could be playing against each other sooner or later.

What a treat that would be, but that will have to wait a little longer. Football lovers had to wait for Messi and Ronaldo's rivalry to get going, but when it got going, it was hard to stop.

Ronaldo's elevation to the top came under the guidance of Sir Alex Ferguson who used the Portuguese star primarily as a winger so creating goals were more important than scoring them.

Towards the end of his time at Old Trafford, Ronaldo was given a free role to cause havoc for the opposition defences. Meanwhile, after scoring on his Barca debut, Messi's progression to the star he is today was hindered by injuries.

Messi also had to work his way up the pecking order that saw Ronaldinho, Samuel Eto'o and Henrik Larsson ahead of him at the Nou Camp. 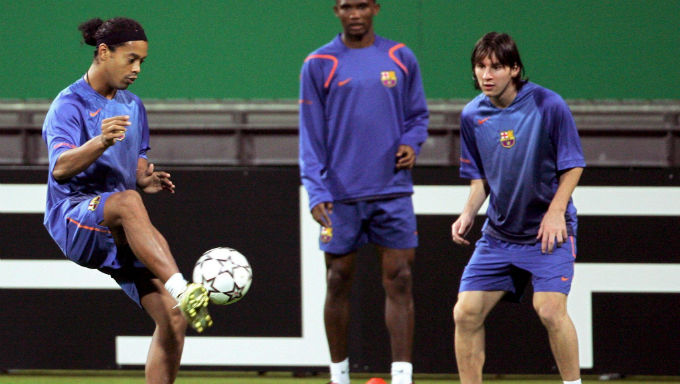 But over time, he did and became the best player ever to wear the Barcelona colours and one of the most exciting players in the world.

A look at the names on the Ballon D'Or trophy since and including 2008, Messi's name is on it six times while Ronaldo is inscribed on it five times.

The Portuguese star will want to draw level with Messi before the curtain comes down on their illustrious careers.

At the height of their brilliance, the pair scored close to a goal a game and the incumbents are on course to achieve the same level of excellence.

Haaland and Mbappe have wasted little time at the start of their careers to show the world what they are capable of and if they continue their current paths, we could see the duo share numerous Ballon D'Or awards as well.

Another similarity between the old and new rivalry is at international level.

In 2016, Ronaldo led his country to the final of the European Championships, but an early injury in the final meant the skipper's role was more of a cheerleader spurring his side on to victory over France.

Messi's CV is missing a major international success and it doesn't look as though that is going to change any time soon.

For all his mercurial brilliance, the supporting cast around him at international level has not been good enough to get them the one thing that will be brought up every time the debate as to who was the greatest of his generation pops up.

Mbappe already has a World Cup winners’ medal on his list of achievements, scoring in the 4-2 final win over Croatia in 2018.

If Mbappe is to share a rivalry with Haaland that lasts a generation, then he will have the upper hand in that side of the debate.

For all Haaland’s talent and ability to find the back of the net on a regular basis, it's unlikely Norway will win the World Cup or the European Championships any time soon.

For the record, Mbappe added to his international goals with the winner for France in their 2-1 Nations League win at Croatia while Haaland failed to find the back of the net as Norway beat Northern Ireland 1-0 in the same competition.

We don't know how much longer Messi and Ronaldo will continue playing for. But right now, we have four of the most prolific strikers playing at the highest level.

Let's enjoy it while we can.

© PA
4 Unforgettable Cheltenham Festival Betting Gambles
© PA
Maryland Sports Betting Bill Moves to House with More Licenses
By continuing to use our site you agree to us using cookies in accordance with our Cookie Policy .
Got It
×