One of the highlights of this season's Premier League occurred last weekend and will be talked about for weeks and perhaps months to come.

No, VAR had no part to play in it. It wasn't a 40-yard goal of the season contender either, nor a superb last-ditch save to win the game.

Jurgen Klopp's post-match interview with BT Sport's Des Kelly can be filed in the same folder as Kevin Keegan's 'I'd love it' rant when the former Newcastle manager reacted to comments made by his Manchester United counterpart Alex Ferguson who guided his side to the 1995/96 title despite being 12 points behind Keegan's side with four months of the season to play.

For weeks, Klopp's patience has been tested as his players have picked up injury after injury to sideline them for lengthy periods of time.

It began with 2019 Ballon d'Or runner-up Virgil van Dijk who suffered a season-ending injury early in the first Merseyside derby of the season at Goodison Park, which ended in a 2-2 draw.

Klopp feels some of the injuries could have been prevented had the Premier League shared his view that clubs should be permitted to make five substitutions that were allowed following lockdown instead of reverting back to the traditional three this season.

The German also feels the injuries have been a result of playing in the Saturday lunchtime kick-off after playing in the Champions League on a Wednesday night.

Wilder bore the brunt of Klopp's rant after the champions were held 1-1 at Brighton in the lunchtime kick-off last Saturday.

It was the second time this season Liverpool were asked to play in the Saturday lunchtime fixture.

On Saturday at Brighton, James Milner limped out of the 1-1 draw with a hamstring injury three days after losing 2-0 at home to Atalanta in Europe's elite club competition.

When asked about Milner's injury, Klopp blamed BT Sport, broadcasters of the Saturday lunchtime game, for the injury.

"Hamstring, surprise. And they had injuries as well.

"Because it's a tough time, but ask Chris Wilder how we can avoid that.

"I'm not having a go at the broadcaster.

"Since then, it's not happened because you need at least 14 votes but Chris Wilder or whoever says constantly that I'm selfish. 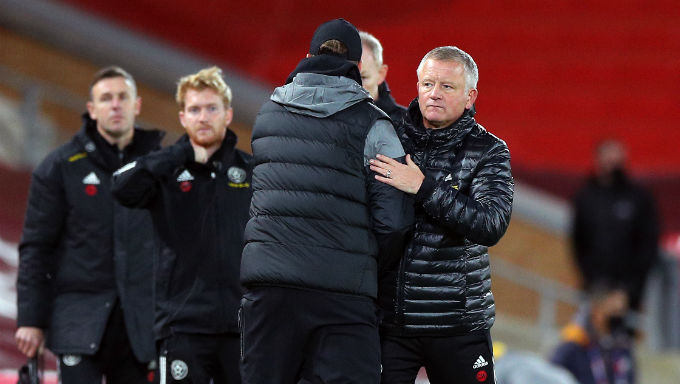 "I think all the things he said show that he (Wilder) is selfish, but that's not too important.

"I was in a similar situation as he was when I worked at Mainz and it was all about staying in the league.

"If you can have five subs in a game like this, it's not for tactical reasons.

"For example, today, five subs, I take off Robbo (Andy Robertson), 100 per cent, and bring on Kostas (Tsimikas) to save Robbo, not to make our game better, just to save him, and that's the situation."

The bad news for Klopp is that Liverpool are scheduled to play another Saturday lunchtime game on December 19, three days after they host Tottenham in the Premier League.

By then, Klopp will hope to have some of his injured players available.

So far in this season's Premier League, Liverpool have used a total of 23 players which is three fewer than Frank Lampard's Chelsea who lead the way with 26.

Number of Players Used Per Club

Ironically, one of the two games he decided not to use all three changes available to him was against Wilder's side on October 24 which the defending champions won 2-1 at Anfield after conceding the opening goal.

It was another Saturday fixture following a Champions League tie on Wednesday night.

The kick-off was 8pm, not 12:30pm, which gave Klopp's players an extra few hours to prepare.

Only three managers have decided to use the maximum number of substitutions allowed so far this season.

Ole Gunnar Solskjaer, who was the first football manager to make all five substitutions at one time after lockdown in his side's 3-0 win at home to Sheffield United last season, has made 27 changes from a possible 27 this campaign.

West Brom boss Slaven Bilic is another manager who is not afraid to change his personnel during matches with all 30 possible substitutions made so far.

The third manager who has made the most of his substitutions is Tottenham manager Jose Mourinho.

Mourinho has used his changes to guide Spurs to the top of the table after 10 games and it will not be a surprise if the Portuguese makes three more changes this Sunday against Arsenal in the first north London derby of the season.

Percentage of Substitutions Made

One team that won't be too bothered about the number of substitutions a team is allowed to make, will be Burnley.

Sean Dyche has made the fewest changes this season with just 15 made from a possible 27 and has yet to make three changes in a league game.

That might be one of the reasons why the Clarets are sitting 19th in the table ahead of their clash with Everton on Saturday.

Dyche and the rest of the Premier League managers would love to be in Klopp's position.

Liverpool start gameweek 11 joint top of the table with Spurs and safely through to the knockout stage of the Champions League.

But top of Klopp's wish list will be getting through Sunday night's late game with Wolves with no further injuries.

© PA
Do Chelsea Have The Pulling Power To Lure Erling Haaland?

© PA
Is This Premier League Campaign The Season of Comebacks?
© PA
How Bruno Fernandes Transformed Manchester United in a Year

© PA
The Closest Title Races In Premier League History
© PA
United Ireland Betting Spikes Amid Call For Referendum
Ranking the Top 5 Biggest Outright Upsets in Super Bowl History
© PA
Arkansas Sees Slight Increase in December Sports Betting
By continuing to use our site you agree to us using cookies in accordance with our Cookie Policy .
Got It
×