It’s been a busy few days of cup football as the FA Cup made way for the semi-finals of the Carabao Cup. In the first legs, Manchester City overcame United in an impressive derby performance at Old Trafford, while Leicester City and Aston Villa played out a 1-1 draw, leaving it delicately balanced for the second leg at the end of the month.

The game at the King Power Stadium saw one player on each side emerge with their reputation enhanced. Both, as it happens, have been talked about for a while as potential future stars but both have had hugely contrasting fortunes when it comes to playing for club and country.

Villa captain Grealish was everywhere on Wednesday night. It wasn’t necessarily an all-action performance with flying tackles, surging runs and rifling shots on goal (as it happens he didn’t have a single one).

This was a much more controlled, mature performance epitomising his current coming of age campaign - far removed from his last spell in the Premier League, when finding himself in the headlines for all the wrong reasons. 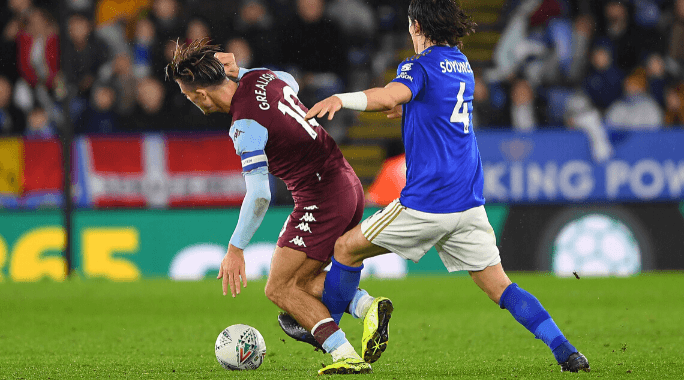 Villa knew they’d be under the cosh for much of the game away to the high flying Foxes. As it turned out they shaded the first-half before finding themselves under siege in the second.

Whenever they had the ball, they invariably went through the 24-year-old. Under immense pressure he’d do what we’re now accustomed to seeing - he’d shield the ball, keeping opponents at arm's length, carrying the ball, before either finding a teammate or drawing in a foul. It happened time and time again.

There was always a Zaha-like look in the direction of the referee but unlike the Crystal Palace winger, Grealish would invariably keep his cool. OK, there are suggestions he goes looking for the foul - but then the focus should be on the perpetrator who while knowing that, shouldn’t fall for the age-old trap of having a nibble.

He was frustratingly good.

He has been the beacon within this Villa team for some time. And after three seasons of revelling for his boyhood club in the Championship, he’s now delivering in the top flight and the wider public have begun to take notice of his prodigious talents.

Eight goals and six assists are impressive figures for an attacking midfielder in a struggling team. Not only is he the most fouled player in the division but he’s as influential for his side, in terms of chances created, as Kevin De Bruyne is for Manchester City. Villa, though, are hugely reliant on their club captain.

And for that reason alone, there’s no chance that Grealish will be on the move in January, with Villa one point clear of the relegation zone. Though it does seem inevitable that he will move on, if not this summer then probably the next.

As long as the club stays in the Premier League, the club’s ambitious owners will do all they can to keep him. Relegation in May, however, would be a different scenario altogether.

For me, he could do more than a good job at one of the current big six sides. Tottenham have long been linked with him and could be a ready-made replacement for the reportedly outgoing Christian Eriksen. Even with Dele Alli’s inconsistent form, could Grealish’s arrival also help him to up his game?

Grealish is also said to be one of Ole Gunnar Solskjaer’s top targets at Manchester United - with the Norwegian keen to pursue his policy of bringing young, hungry, homegrown stars to the club.

United are clearly struggling in midfield with Paul Pogba’s future again uncertain while Fred and Andreas Pereira have still yet to convince they can help United become serious title challengers again.

It’s ironic, therefore, that a player capable of operating at one of the country’s top clubs is yet to receive a senior call up to the national side, with Euro 2020 getting ever closer. Gareth Southgate happened to be in the stands on Wednesday night - the former Villa defender knows Grealish well from his days as the U21s manager.

His reticence could go down to where to best to deploy the Villa playmaker. Does he see Grealish as a wide forward, where he is vying for a place alongside Raheem Sterling, Marcus Rashford, Callum Hudson Odoi and Jaydon Sancho? Or as a central attacking midfielder along with Mason Mount, James Maddison, Phil Foden and Dele Alli?

It would be tough to see Grealish miss out - but with just two friendlies left in March before Southgate names his squad, time is fast running out.

I have a feeling Grealish’s ability to be a ‘Jack’ of a couple of trades has made him less of an obvious choice.

He can only maintain his current standards and hope it prompts a late change of heart from the England manager. What better fixture to deliver another statement than at home to the champions Manchester City on Sunday.

Grealish drew praise from Pep Guardiola the last time the two sides met (in a 3-0 win for City) - another performance will see the clamour grow even further.

However, for Leicester’s Kelechi Iheanacho, while he can look back at 23 international caps for Nigeria, starts in a Leicester City shirt have been harder to come by - with just 20 of them in the league in his two-and-a-half years at the club

Iheanacho may have come once again off the bench to score his sixth goal in eight appearances against Villa on Wednesday, but is the £25 million signing finally proving his worth?

It seems like a long time ago when the 23-year-old first made a name for himself as Manchester City’s super-sub scoring regularly when coming off the bench. With the lack of playing time, he left the Etihad despite an impressive 21 goals in 64 games. 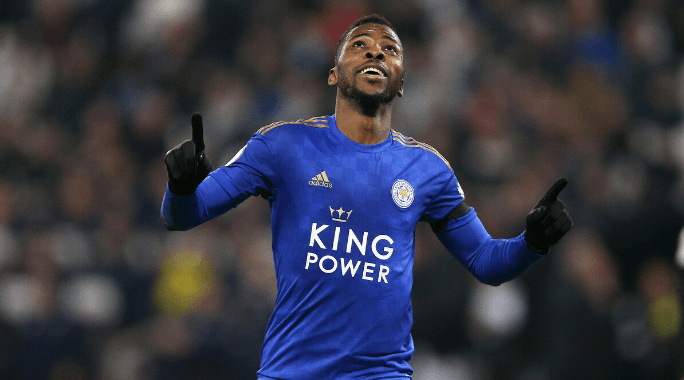 Iheanacho has been working well under Brendan Rodgers (© PA Images)

He soon found himself in a similar situation at the King Power Stadium, playing second fiddle to talisman Jamie Vardy must be a thankless task for any of the club’s strikers.

He’s been in and out of the first team picture under Craig Shakespeare, Claude Puel and currently, Brendan Rodgers, who has only started him five times this season in all competitions - his first starting berth in the Premier League came on December 1st.

There’s no doubt Rodgers and the player himself deserve credit in maintaining his confidence levels. Rodgers recently spoke of the striker training like an ‘animal’ despite not being involved as much as he would’ve liked.

And that’s despite seeing Ayoze Perez featured far more regularly in the starting XI since arriving from Newcastle in the summer, mainly down to his ability to be able to play across the front three.

But this season Rodgers sprung a surprise in early December when pairing Iheanacho with Vardy from the start for the first time in 14 months.

The Nigerian put in arguably his best performance in a Foxes shirt, providing a goal and an assist, with the pair starting again in the following game against Norwich. Unfortunately, Iheanacho lost his composure and was substituted for unsportsmanlike behaviour.

It hasn’t been tried since, with Vardy missing three of the following four games. That sums up his time so far

Rodgers largely prefers to set up in a 4-1-4-1 formation and as Iheanacho doesn’t appear to have the skillset to operate as a wide attacker - he must continue to bide his time until Vardy becomes unavailable. While his finishing has come on leaps and bounds under Rodgers, I just feel his hold up play needs improving.

Iheanacho drills it home to level it 🎯

But with the lack of playing time now starting to affect Iheanacho’s international career (he was overlooked for the 2019 African Cup of Nations), how long before he starts looking elsewhere for regular first-team football?

He’s already been linked with moves to Aston Villa, Crystal Palace and Turkish side Besiktas but Rodgers remains adamant that no one will be leaving the club this month, as they try to seek Champions League qualification for only the second time in their history.

It makes the next four months crucial not just for Leicester’s European hopes but for Iheanacho’s development.

Is this purple patch going to be the platform to resurrect his Leicester career or has it put him in the shop window at just the right time?

While time still on his side, he will soon have a big choice to make.