Rooney impressed in Derby’s 2-1 over Barnsley on Thursday, assisting a goal (© PA Images)

I must admit, when Derby County were initially linked with a move for England and Manchester United legend Wayne Rooney, I was as skeptical as the next person.

I saw it as a pretty blatant publicity stunt by a club owner keen to get his Championship outfit back in the headlines.

After all, why would someone who was enjoying not so much an Indian summer, but an American one, in the twilight of his career with MLS side DC United – relocate to the East Midlands to scrap for a side who’ve fallen from play-off finalists to possible relegation contenders?

But five months after Rooney officially agreed to become a Ram on an 18-month deal as a player-coach, manager Phillipe Cocu wasted little time in handing him his debut against Barnsley on Thursday, also handing him the captain’s armband.

And after looking a little off the pace to begin with, Rooney’s influence grew, so much so that the idea of him mixing it in the Championship didn’t seem such a bad idea after all. 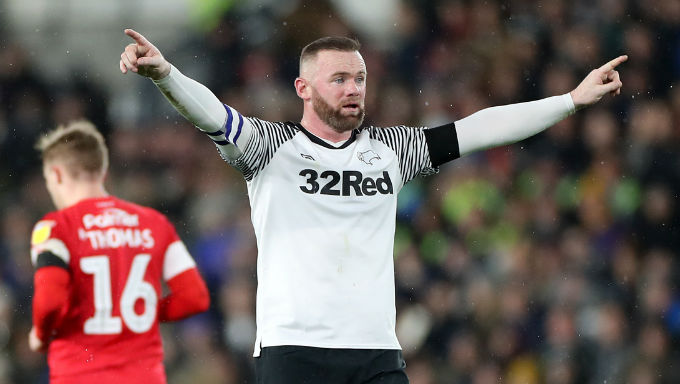 Rooney was as composed off the field as he was on it, showing real leadership skills (© PA Images)

Operating in midfield, just as he did during his latter says at Old Trafford, he assisted Jack Marriott with a pinpoint free-kick before arrowing a brilliant pass to Andre Wisdom – a well-rehearsed move during the game – who then supplied Martyn Waghorn for the second.

You could see that despite his lack of recent game time, his awareness, his vision, his ability to pick out teammates in the tightest of positions were undiminished. That’s a great trait to have in the Championship where time on the ball can be at a premium.

He just looked happy to be playing again.

Which was evident when admitting afterwards that he’s ready to play anywhere (apart from right wing) to help Derby’s cause. Whether it’s as a 9, 10, 8 or 6, he’ll do all he can to make Derby rediscover their winning formula.

But in his coaching capacity, 32Red ambassador Rooney wasn’t shy in telling some of the youngsters where they could do better.

Most notably when Marriott had missed two decent chances. Rooney said afterwards: “When Jack Marriott missed, I wasn’t unhappy that he missed. But the way he was so casual, he was lazy with it. You have got to put it in no matter if you are offside or not. Hopefully he won’t do it again.”

He spoke with a quiet air of authority. “It’s been difficult for the lads when conceding. Tonight they learnt to fight…we were so much better at defending throw-ins tonight. By pinning them. Small things we will get better at”.

It is Jack Marriott's night now! ✨

He gets on the end of Rooney's pin-point delivery to open the scoring! 🎯 pic.twitter.com/ueiF3OmoCo

It was an impressive performance on and off the pitch. He’s definitely taking this coaching role seriously.

Derby and possibly Rooney’s next challenge is in the FA Cup. With the trip to Crystal Palace to come on Sunday – two matches in just four days might be a stretch for the 34-year-old, particularly having lasted the full 90 minutes in midweek.

The interesting thing is not only did his one-time England coach and current Palace gaffer Roy Hodgson try to sign Rooney in the summer of 2018, but Rooney has never lost at Selhurst Park.

The Eagles have been decimated by injuries in recent weeks. If ever there was a time for Rooney to come on as a super sub and announce his return to English football, what chances it happening in South London?

No Vardy, No Problem For Leicester

Meanwhile, across the East Midlands in Leicester, talk of the Foxes being found out after defeats to Manchester City and Liverpool have been emphatically dismissed thanks to back-to-back wins.

For me though, the most impressive aspect of those wins against West Ham and Newcastle was that Jamie Vardy didn’t even feature in either matchday squad.

Their 32-year-old talisman – who leads the Premier League scoring charts with 17 – missed the Hammers’ match to attend the birth of his baby daughter, whilst his absence at St James’s Park was more a precautionary measure due to a minor calf injury.

I’ve always felt that the Foxes have become over-reliant on the former England man. I could not have been more wrong on this occasion, scoring five goals across the two games with five different goal scorers.

One of them, Kelechi Iheanacho, has surprised me with the way he’s improved under Brendan Rodgers. That is another feather in the cap for the Northern Irishman. His ability to keep morale high amongst the fringe players was clearly evident when making no less than nine changes to his side at West Ham. 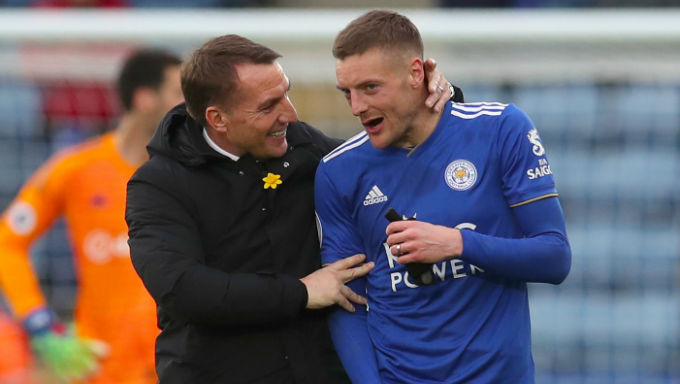 Afterwards, Hamza Choudhury revealed this has been one of their major strengths under Rodgers this season. Every player feels part of the squad, whether they’re regulars or not, and unlike previous regimes, every player knows their role if and when they’re called upon. Rodgers appears to have got his man management approach spot on.

And tactically, he’s doing ok too. As seen by the Foxes switching to a back three for the first time this season against the Magpies in the 3-0 win. They played with a backline of Caglar Soyuncu, Jonny Evans and Christian Fuchs, with Ricardo Pereira and Ben Chilwell operating as wing backs.

After their recent maulings at the hands of Liverpool and City, I feared the Foxes were missing a Plan B. I’ll show more faith next time.

Those two wins leave Leicester with a 14-point buffer on the Champions League places. At the turn of the year, that is simply incredible. But unlike the 2015/16 season when I wouldn’t accept they would win the title until it was sealed after the 2-2 draw between Chelsea and Tottenham – I’m not counting my chickens just yet.

With the January transfer window now open, all eyes continue to be on the first big name arrival/departure in the Premier League.

As discussed in my last article, Mesut Ozil’s future hangs in the balance at Arsenal but I just wonder whether the vast improvement in the team’s performance against Manchester United might persuade him to stay on?

Arsenal and Ozil built on the 34-minute display against Chelsea with a complete performance across both halves, carving United open at will. Ozil looks unrecognisable to the player who looked so disenchanted under Unai Emery and Freddie Ljungberg, with a move to Fenerbache strongly mooted this month.

However, under Mikel Arteta, he’s started every game and seems to be enjoying playing in a slightly deeper role. Not only did he cover more ground than any other outfield player against Ole Gunnar Solskjaer’s men, he also won the ball back ten times.

It also happened to be the first time that Ozil, Nicolas Pepe, Alexandre Lacazette and Pierre Emerick Aubameyang had all started together. Does he see a happy future as part of the Gunner’s ‘fab four’?

The final decision could well be out of Ozil’s hands, should Arteta need to generate funds himself in a bid for defensive reinforcements.