The Melbourne Cup on Monday lost two fancied British raiders to injury, as Red Verdon and Gold Mount were ruled out of Flemington's $8m (£4.25m/€4.92m) feature.

Saturday's Caulfield Cup had expected to cause big Melbourne Cup betting shake-ups, and it did, Japan's Mer De Glace romping away with the Group 1 win and second-place in the betting at $10.00 (9/1).

However, as the winner confirmed his place in the 24-runner line-up, down the field Red Verdon and Gold Mount returned lame, the latter suffering a career-ending injury.

“He came back fine from the racecourse on Saturday and his legs were good, but when I took off his bandages the next morning you could see there was something not right,” Fabrice Smeulders, the travelling head groom for trainer Ian Williams, told Racing.com.

“The vet came and scanned him and discovered damage to his suspensory ligament so he has been retired. It’s a big blow for everyone. He’s a very kind horse and so professional.”

Gold Mount To Stay In Australia For Retirement

Gold Mount only joined Ian Williams this summer from Hong Kong, with owner Pan Sutong specifically targetting a Melbourne Cup bid with his six-year-old. Previously named Primitivo when last trained in Britain, he had given trainer Alan King a first Royal Ascot win in the 2016 King George V Stakes.

Although only starting out on his association with Gold Mount, Williams had already succumbed to his charm, and expressed his love for the son of Excellent Art on Twitter.

"It's a tough game," he tweeted, "and setbacks are part of the sport, but Gold Mount will enjoy a peaceful retirement. He gave us some great times this year, and thank you for all the kind messages and support."

Gold Mount will remain in Australia to enjoy his retirement at his owners' stud Goldin Farm. He had been 28th in the Melbourne Cup order of entry after his eighth place in Saturday's Caulfield Cup. 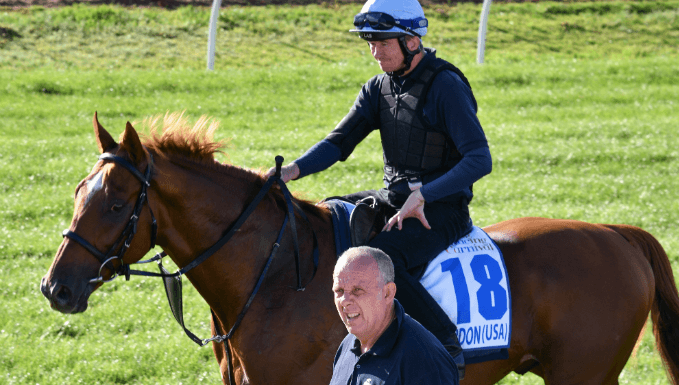 Fellow British raider Red Verdon has not been retired, but sustained enough damage to his right foreleg that trainer Ed Dunlop has sent him home to Newmarket.

It was a particularly tough blow for the team, who had got Red Verdon as far as the Caulfield Cup last year too, only to likewise leave without running in the Melbourne Cup.

On that occasion, he had sustained a bruised heel in training on the Thursday before the Tuesday race. He passed a veterinary exam on the Saturday morning, but fell lame again in the build up and was scratched from the race.

The same connections had to leave Australia without two-time Melbourne Cup second Red Cadeaux in 2015, when the brilliant Hong Kong Vase winner was fatally injured during his fifth attempt at winning the 'Race That Stops A Nation'.

Caulfield Cup fourth Constantinople was the big mover in the Melbourne Cup betting this weekend, sliding from $12.00 to 7.00 favourite, after connections revealed a change in jockey.

It was the first time a Northern Hemisphere-bred three-year-old had run in the Caulfield Cup, and Nolen was quick to look on the bright side, saying that at least the near miss means he won't have a penalty in the Cup on November 5.

Co-trainer Ben Hayes was just as positive, telling The Age: "It was a fantastic run by the horse, there was nothing Luke could have done. Just watching the replay, he got bottled up, he was last on the corner, he flashed home for fourth when he got out."

What Else Did Caulfield Cup Do To Melbourne Field?

The Caulfield Cup winner Mer De Glace earned a 1kg (2.2lb), taking his Melbourne Cup weight to 56kg (8st 8lb). That puts him just below topweight of 57.5kg, but his Caulfield win makes him exempt from the ballot regardless.

The Danny O’Brien-trained Vow And Declare earned $700,000 for his second placing in the Caulfield Cup and as a result has moved from 36th to 31st in the latest Melboure Cup Order of Entry, but the scratching of Gold Mount and Red Verdon now puts him in 29th.

After the passing of the first ballot clause on Monday, and those withdrawals, well-fancied Finche has also moved up, and is now guaranteed a run, along with Muntahaa and Mr Quickie.

Explaining Mer De Glace's penalty, Racing Victoria's Greg Carpenter said: "The first six placegetters officially finished within two lengths of each of other and there was a litany of hard luck stories from the beaten runners.

‘’Mer De Glace faces a new challenge in the Melbourne Cup over 3200m at Flemington in 15 days and a new wave of challengers given 17 of the top 24 horses in the current Melbourne Cup Order of Entry did not compete in the Caulfield Cup.’’

Carpenter noted that the last Melbourne Cup winner to have competed in the Caulfield Cup in the same year was Viewed in 2008, who ran 10th at Caulfield before winning the Flemington feature.

Since 2008, 81 Caulfield Cup runners have contested the Melbourne Cup with the best placed finishers being Johannes Vermeer (second in 2017); and Lucas Cranach (2011), Jakkalberry (2012) and Who Shot Thebarman (2014) who all ran third.