There’s a reason why just 2.2% of seven million Premier League Fantasy Football users have selected Alexandre Lacazette in their squad.

With just five league goals and two assists to his name after 17 appearances, the Arsenal forward has amassed a measly 60 points in the ever-popular online fantasy game.

For perspective, that’s less than Burnley’s not-so-glamorous alternatives Ashley Barnes (61) and Chris Wood (96), while Brighton’s Neal Maupay (87) is making a mockery of the £3.4m price difference between himself and Lacazette.

Unfortunately for Lacazette, strikers are also judged on their number of goals in reality too, and his lack thereof has led to calls for the Frenchman to be dropped once talisman Pierre-Emerick Aubameyang returns from suspension.

The case for sticking with Lacazette hasn’t been aided by the form of Arsenal’s bright new hope Gabriel Martinelli, who has hit two goals in two starts in the absence of Aubameyang. The Gabon international has one more game to serve in his suspension after a straight red card against Crystal Palace.

Martinelli has been a breath of fresh air for Arsenal fans, slotting seamlessly into Aubameyang’s role on the left of an advanced trio in Mikel Arteta’s 4-2-3-1 formation.

But as Arsenal’s main goal getter and a legitimate contender for a second successive Premier League Golden Boot, Aubameyang is pretty much undroppable when available. So if Arsenal fans want 18-year-old Martinelli to keep his place, something has got to give.

With Mesut Ozil firmly back in favour in the No.10 role, and £70m summer signing Nicolas Pepe finally beginning to prosper on the right of the advanced trio, the left flank and the No.9 position up front are up for dispute.

“Arteta has a tough decision to make when Aubameyang is back,” former Arsenal defender Nigel Winterburn told Gambling.com.

“I suppose he could play Aubameyang straight through the middle and leave Lacazette out, but it’s a risk if you ask me because he’s pivotal to how Arsenal play.

“It’s very difficult to say who gives way when all of them are available. A lot of people will point the finger at Lacazette because he’s the one who has struggled for goals of late.

“Pepe looks to me as if he’s growing in confidence – and I’ve always said it can take time for players to settle in – but what Lacazette does for the team should not be underestimated.

“He holds the ball up very well, something Aubameyang isn’t quite so good at; he’s much better at picking up the right positions to finish off chances.

“But if you take Lacazette out of that equation then the whole thing can fall through. But unfortunately, strikers will always be judged on the amount of goals they score.”

Indeed, perhaps we ought to cut Lacazette some slack.

After all, Liverpool’s front three is the most feared in world football right now, and Roberto Firmino – their No.9 who spearheads the attack – is the least prolific of their forwards, yet if you take the Brazilian out of the side then Jurgen Klopp’s winning machine lacks arguably the most vital cog.

Firmino only has two more goals and two more assists than Lacazette in the Premier League this season and has also played five more games, yet his influence in Liverpool’s march towards the title is undisputed.

You could argue that Lacazette is a poor man’s Firmino, but maybe that is just a measure of where Arsenal are at – 10th in the table and 10 points shy of the top four, while Liverpool are a mind-boggling 34 points north.

But with signs of progress under Arteta – the Gunners proving more resilient and tougher to beat since he came in – Lacazette arguably deserves more credit for his role in the improvement.

“From Arteta’s point of view, the number of draws on the board will be frustrating,” said Winterburn in the aftermath of the 2-2 draw at Chelsea on Tuesday. “But the Chelsea game was a point gained whereas other games you could look at as points dropped.

“But whichever way you look at it, there’s no denying that we’ve seen a difference in the side since Arteta took charge.

“I’m seeing a lot more energy, a lot more commitment, better organisation, but most importantly it looks as if the players are enjoying themselves in an Arsenal shirt, which helps enormously for the road ahead.

“The signs are positive in my opinion. Obviously, we don’t want to get carried away, we know we’re not in the top four teams in the country but we can get back there, and I like what I’m seeing so far.

“It’s more of a pleasure to go and watch Arsenal now than it was for the previous year, that’s for sure. 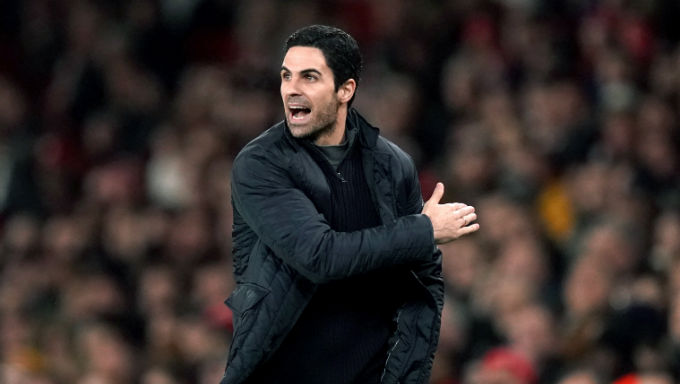 Mikel Arteta has made Arsenal tougher to beat with a new, energetic approach (© PA Images)

“Against Chelsea, even with 10 men, they went hunting for the ball high up the pitch. That means – if you’re good at it – you’re disrupting the opposition, delaying them, sometimes winning it back, but in most cases you’ll reduce the opportunities for your opponents to take shots and make crosses.

“It’s significant that this coincides with Arteta coming in, that work-rate and energy level has just gone through the roof compared to what it was like under Unai Emery.”

Meanwhile, whether he keeps his place or not, Arsenal do appear to have a gem on their books in Martinelli, a player Winterburn believes has captured the imagination of Gunners fans.

He said: “He’s just come back into the side because of suspension to Aubameyang, which makes things interesting when he’s back.

“But it’s a good problem to have because no matter what starting eleven Arteta goes with, he’s going to have a good alternative on the bench.

“He’s got bundles of energy, lots of pace and he looks very composed in front of goal. He’s certainly a player with huge potential and he’s really starting to excite the Arsenal supporters again.

“We’re hoping to see lots more of him in the coming weeks.”

While a selection headache up front will no doubt be welcomed by Arteta, he faces fresh concerns in his back four with David Luiz having been sent off in the draw at Stamford Bridge.

Injuries, suspensions and the worrying form of Shkodran Mustafi are all contributing to a lack of stability and longevity at centre-half in particular, although they’re allowing their opponents fewer shots on goal if nothing else.

The club have been linked with several transfer targets this month, but will they dip into the loan market, make permanent signings or stick with what they’ve got?

“You can never rule it out and I think it’s obvious that Arsenal do have a lot of problems particularly at centre-half,” said Winterburn.

“At the moment, everyone is trying to second-guess what Arsenal are going to do. Will they buy a centre-half? Will they go for a full-back? Or a holding midfield player?

“I’ve got to say, I thought Xhaka was outstanding when he went back to centre-half at Stamford Bridge, maybe there’s the option to play him there again and see how things go.

“But hopefully Sokratis will be back soon, Rob Holding too. There is a supply of centre-halves but getting them all fit and keeping them fit is the problem, because it stops you from settling on the best pairing.

“There’s lots of positions that Arsenal will be looking at but you have to be careful because the best players often don’t want to leave their clubs in January. Maybe a signing would stabilise us more, but is there a better option at the end of the season?

“I understand that fans want players to come in and immediately improve the team, but it’s not always feasible.”

The only area Arsenal fans can rest assured on though is up front, where Lacazette’s ‘lack-of-threat’ in front of goal may not be so alarming after all.

Mississippi June Sports Betting Handle Up As Casinos Reopen
© PA
Odds Drift On Tories Winning A Majority At The Next Election
© PA
New Jersey June Sports Betting Revenue Rises Sharply
© PA
Will Arsenal’s Unbeaten Premier League Season Ever Be Matched?
© USA Today
Colorado Reports $25.6M in Sports Betting Handle From May
© PA
How Average Driving Distance Has Evolved in Golf Since 1980
By continuing to use our site you agree to us using cookies in accordance with our Cookie Policy .
Got It
×