Should Arsenal Pawn Alexandre Lacazette While They Still Can?

Alexandre Lacazette has divided opinion ever since his £46.5million arrival in the Premier League from Lyon in 2017, a move which broke Arsenal’s record transfer fee at the time.

Much like the predecessor of the club record fee paid, Mesut Ozil, Lacazette has failed to live up to his billing, at least in terms of traditional measures of success when it comes to strikers.

With 48 goals in 127 Arsenal appearances in all competitions to date, a rate of one goal every 2.65 games may not seem all that bad, but it is worse than his overall career average of a goal every 2.27 games.

In terms of goals-per-game output, the likes of Lionel Messi, Cristiano Ronaldo, Robert Lewandowski and Mohamed Salah have really upped the ante in recent years, adding pressure on forwards the world over.

But as we’ve seen with the likes of Roberto Firmino, arguably the finest link-man striker in world football, it’s not all about the goals in forward play anymore, and one could argue that Lacazette fits into the ‘link-man’ bracket while Arsenal rely on Pierre-Emerick Aubameyang for the prolific output, much like Liverpool depend on Salah and Sadio Mane.

Arsenal are at a bit of a crossroads with Lacazette though. At 29 and with two years left on his current contract, the Frenchman still carries a decent transfer market value, so it’s no surprise to read speculation linking him with Atletico Madrid this week.

The La Liga outfit have been admirers of Lacazette for some time. In fact, he chose the Emirates over Atletico in 2017 but that has not deterred Diego Simeone from wanting to sign him at the second time of asking.

It’s no secret that Arsenal want Atletico’s defensive midfielder Thomas Partey, but talks over a £45m move seem to have hit a snag this week, leading to a fresh spate of speculation suggesting Lacazette could be used in a swap deal.

No Swap Deal For Partey

However, Spanish publication Marca claim Atleti will not entertain the idea of a player-plus-cash deal for Partey, though they have reportedly used the negotiations to put forward a straight swap deal for Lacazette in exchange for either Thomas Lemar, Vitolo or Angel Correa.

Of the aforementioned trio, Lemar is probably the most appealing proposition with the one-time Liverpool target still only aged 24, although the former Monaco winger has endured a disappointing two seasons at the Wanda Metropolitano.

It’s not a priority position for manager Mikel Arteta to improve on, but a move to the Gunners could really reignite what was billed as a very promising career only two years ago, whilst allowing the club to part way with Lacazette in the process. 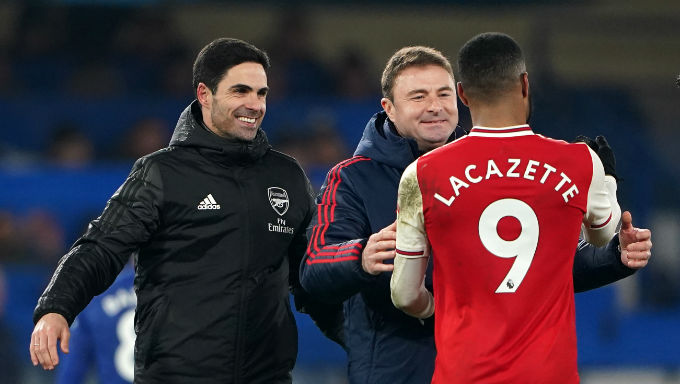 Former Arsenal full-back Nigel Winterburn has been a big advocate of Lacazette’s qualities throughout his time at the Emirates and the Gunners legend maintains that stance, telling Gambling.com he hopes Arteta retains the Frenchman.

He said: “He’s being touted around as somebody who could possibly be used as bait to try and bring in some money, but I’ve stated all along that Lacazette is a player I really like, I think he’s the one centre-forward at Arsenal that really links up the play better than anyone else at the club.

“But then a lot of people feel his goalscoring record isn’t good enough at the top level, though I think you have to look at the bigger picture.

“I would be disappointed if he was to leave this summer, but Arteta may be planning to adjust Arsenal’s style of play and if they can secure Aubameyang’s contract extension maybe he’ll feel as though he has enough cover in that role which would allow him to let Lacazette go and recoup some money.

“I like his strength and power in key positions though, so personally I’d like to see him stay.”

Will Willian Fit In?

Indeed, Lemar may not be in Arteta’s trail of thought after Arsenal’s most notable signing so far this summer – the capture of Willian on a free transfer from Chelsea.

The 32-year-old will bolster Arteta’s options in attack with his ability to play on either flank or in the No.10 position, though his signing has drawn criticism in some quarters given the Brazilian’s age.

Winterburn does not believe Willian’s age works against the Gunners, particularly as he enjoyed one of his best seasons in Blue last term to cap an impressive haul of 63 goals and 56 assists in seven seasons with Chelsea.

“I think a lot of people have a big issue with age, but having played to nearly 40 myself I don’t really see age as justification,” he said.

“I think it’s all about performance and desire to be able to better yourself and I think it’s quite clear with Willian that he’s still got a lot to offer.

“I think, potentially, if he can maintain the level he had at Chelsea with Arsenal, we’ve got a very good player on our hands, someone who can play in several positions. What will be very interesting for me, will be how Arsenal line up and what positions will certain players be playing in, particularly if a few more signings are pulled off.

“That’s the most intriguing thing for me as we approach the start of next season.”