Should Tottenham Sign A Back-Up For Harry Kane This Month?

Jamie Casey
Url copied!
© PA
Harry Kane has been ruled out for up to six weeks with a hamstring injury (© PA Images)

Tottenham once won eight successive games while Harry Kane was injured, but Jose Mourinho’s full-strength line-up in Sunday’s 1-1 draw with Middlesbrough in the FA Cup suggests the Portuguese should be in the market for a striker this month.

Tottenham lined out “without a striker” – in Mourinho’s own words, with attacking midfield duo Lucas Moura and Heung-Min Son deployed as makeshift strikers in a 3-5-2.

As it happened, Moura filled the role well, rescuing a replay for Spurs with a neat header, but it’s clear Tottenham lack a focal point in the penalty area without their talisman Kane.

Mourinho’s reluctance to use 17-year-old prospect Troy Parrott, a natural striker, from the suggests the teenager is not quite ready to be thrust into the void vacated by Kane.

So, Mourinho will almost certainly go looking for reinforcements this January, but who do the bookmakers say Tottenham have the best chance of signing?

Somewhat dubiously, Gareth Bale (5/2) and Dries Mertens (6/1) are the forwards most likely to join Spurs this month, according to the latest transfer betting odds, but neither player is an out-and-out striker.

We spoke to former Tottenham player Pascal Chimbonda to get his thoughts on who Mourinho should target and the Frenchman hit the nail on the head for a short-term solution.

“I do think they need a striker you know,” he told Gambling.com. “Harry Kane is out for five or six weeks – who is going to score the goals? Lucas Moura is not a natural striker, Spurs need someone more like Kane, a focal point in the penalty area.

“Dare I say it, but I think someone like Olivier Giroud fits the bill. It’s obvious Frank Lampard doesn’t fancy him at Chelsea, I’m sure Giroud wants out, so why not him? Yes, he’s a former Arsenal player, but he’s also a World Cup winner and presumably he’s available.

“I’d take him on loan, but if the opportunity was there to buy him, then I’d buy him. There’s no one else readily available on the market who has his quality.”

Giroud Out Of Favour

Indeed, Giroud is very much out of favour at Stamford Bridge, making just two Premier League starts under Lampard this season, with his last appearance coming in the 1-0 home defeat to West Ham on November 30.

However, he remains highly rated in France – a regular starter for the world champions – though bookmakers William Hill are not buying into the idea of him joining Spurs just yet, making Crystal Palace 5/2 favourites for his signature with Tottenham a distance 12/1.

Meanwhile, with the highly rated Parrott being made to wait for a proper run in the side, Chimbonda has urged Tottenham fans to trust Mourinho’s judgment in using the young Irishman sparingly.

He said: “He’s a young player with a lot of potential and I believe Mourinho when he says he wants to give youth a chance – but with Troy it’s still only potential. If Mourinho feels he’s not ready, then he’s not ready.

“Spurs is a big club with a big manager – they need big players for big games. Ok, you could look at Liverpool who gave youth a chance in the FA Cup and they beat Everton’s first team, but they’d never do that in a league game.

“Parrott could be the answer further down the line, but he isn’t the answer right now. Spurs need a senior understudy to Kane.”

At the other end of the field, Spurs have not kept a clean sheet since beating Burnley 5-0 on December 7, but former defender Chimbonda does not believe fresh personnel is needed at the back, despite no wins in their last three outings. 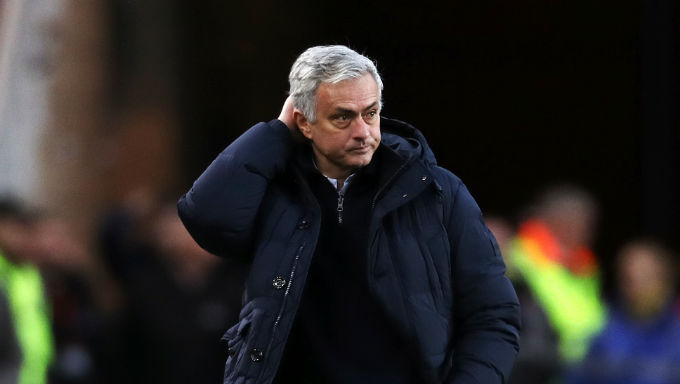 “They’re scoring plenty of goals but they’re simply conceding far too many and giving too many away too cheaply,” said Chimbonda.

“We know the type of football Mourinho likes to play, but we’re yet to see that defensive quality. Hugo Lloris being injured is a big part of that, the backline is missing his captaincy qualities.

“Mourinho’s still stamping his authority on this team so it will take some time for him to work on the shape and get the balance right.

“The question is, who are Spurs able to get in the January window? Are they able to sign who they really want? If not, they need to wait until the summer when they might have a better chance of getting the right target.

“They already have good defenders, they just need to remember how to defend. They’re all players who are good footballers, comfortable with the ball at their feet. That’s all well and good, but you have to be comfortable without the ball too – I’m sure this is something Mourinho is working on.

“Serge Aurier, for example, is a very good player going forward, but defensively he’s vulnerable. He’s played most of his career in France and Ligue 1 is a very different type of league to the Premier League.

“In France you can attack at will from right-back but in the Premier League you won’t get away with it. I think he’s still adapting to that but it can be coached into him and Mourinho will know exactly how to do that. He will focus on him and build his confidence.”

Check Out: Latest odds and offers available at these Football Betting Sites.

Will Eriksen Be Sold?

Meanwhile, one player who won’t be short of transfer speculation this month is Christian Eriksen, who is in the final six months of his Tottenham contract and looks unlikely to agree a new deal having stated his desire to leave last summer.

The situation appears to have had a negative impact on the Dane’s form this season, so much so that his one-time suitors Real Madrid and Barcelona appear to have lost interest.

Bookmakers believe Inter Milan (4/9) are best placed to sign him this month, but Chimbonda wouldn’t be surprised to see 7/1 outsider Manchester United stump up a small fee to secure his services this January.

“Spurs should be cashing in on Christian Eriksen this month,” he said. “If they don’t, he’s going for free in the summer. Since he’s not playing well, they should just take any decent offer that comes in over the next few weeks.

“Even if it’s not the figure Daniel Levy has in mind, any sort of fee can be put towards a new signing. I’m sure a quick resolution can come about, just let him go and be done with it.

“He’s hinted before that he wants to go and play for Real Madrid or Barcelona but I don’t think he’s going to get either move, they’re both stacked with riches in midfield already and I don’t see where he gets in.

“I wouldn’t be surprised if he goes to Manchester United – they need to update their midfield and they could do a lot worse than Eriksen. That would be a better move for him because he’d play week-in-week out, whereas at Madrid or Barca he’d only be a back-up.

“Maybe he’ll wait until the end of the season, after the Euros perhaps, before weighing up his options.”

Eriksen has just three goals and three assists to his name in all competitions this season, but has played the full 90 minutes in each of Tottenham’s last three games.

© PA
Which Players Have The Best Premier League Penalty Records?
© PA
What Are The Odds On English Clubs Winning The Champions League?