Stake In Leading Melbourne Cup Hope To Be Sold Online

Owners of leading Melbourne Cup hope Mustajeer are to sell a quarter-share in the Ebor winner via online auction next week.

The six-year-old was bought by Australian Bloodstock before he won York's Ebor in August, and arrived in Australia last week in preparation for his Melbourne Cup prep run in the Caulfield Cup on October 19.

He was trained in Ireland by Ger Lyons to win the Ebor, but will now be trained by Australia's Kris Lee, with champion jockey Damian Oliver already booked to ride in the Caulfield Cup.

He features high in the Caulfield Cup and Melbourne Cup betting, priced at no bigger than 20/1 to win the latter, the favourite Finche given odds of 14/1, and Lee thinks he has all the right credentials to win both Australian icons.

Mustajeer (pictured in Werribee below) is being trained by Lee from the Werribee quarantine facility, and has reportedly settled in well, with Lee already plotting out his Caulfield Cup final preparations.

"He’s a lovely looking horse that seems quite adaptable in his racing style," Lee said, "whether it’s forward or back, plus he’s performed on firm ground, which he found in the Ebor and he beat home Prince of Arran, who performed very well here previously, so I think he meets all the credentials.

"He’ll go to Caulfield for a gallop probably the Tuesday before the Caulfield Cup, he’ll be stabled there that week to give him the best chance to familiarise himself with the surroundings and he’ll have a gallop there with Damien Oliver aboard."

He added: "This is a fantastic opportunity to buy a share in a horse that’s about to race in the Caulfield and highly likely to progress into the Melbourne Cup." 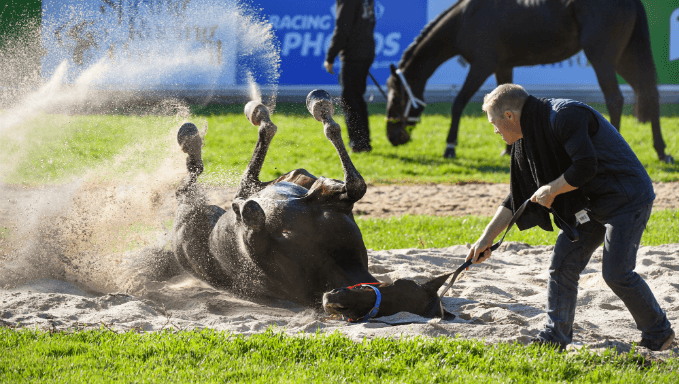 With the Caulfield Cup worth $5million and the Melbourne Cup worth $8million, Inglis Digital Business Manager Nick Melmeth could not place a value on the horse, but said the sale was a coup for Online Auction platform.

He added: “It’s also a great chance for someone to buy into a horse with Mustajeer’s profile – who is not only qualified for the Caulfield and Melbourne Cup – but is a live chance in both races."

Mustajeer won four of his 19 starts for Lyons, the most crucial of which was the victory in the Ebor Handicao. Run over 1m6f, just 2f less than the Melbourne Cup, it has proven a key trial for European raiders hoping to do well on the first Tuesday in November.