Gabriel Jesus’ injury-time strike for Manchester City in their 3-1 win at Wolves on Monday broke a Premier League record that had stood for 3,151 days.

The most goals scored in a full round of Premier League games before this stood at 43 after Raul Meireles’ only goal for Liverpool at Chelsea in Fernando Torres’ debut for the Blues in February 2011.

Since then, the record has come close to being broken with 42 goals scored during the weekend of March 22-23 in 2014, but a new record has been set following a bonanza of goals over the second gameweek of the 2020/21 campaign.

Most Goals In A Premier League Gameweek

Jesus’ strike with the last kick of Monday night’s game at Molineux took the tally of goals to 44.

Sadly, the record came at a time when spectators are not allowed in grounds in an attempt to contain Covid-19.

Indeed, there is a thought that football teams are playing with more freedom without having the terraces filled with fans.

West Brom’s Grady Diangana started the scoring in the 10th minute of their 5-2 defeat at Everton on Saturday which was one of three matches in the season’s second round of games to have seven goals scored.

By the end of Saturday’s action, a total of 21 goals had been scored in just the four matches played and a new record was on course. After Spurs started Sunday’s slate of games with a 5-2 demolition of Southampton, it took the goals tally to 28 with five matches left to play.

Prior to the two Monday night games, 39 goals had been scored, leaving five needed for a new record.

Doubts were raised when Sheffield United’s trip to Villa Park produced just one goal when Ezra Konsa struck in the 63rd minute to get Villa’s season started with a win. However, the final game of the weekend had enough attacking flair to deliver the four goals to set a new record.

It took until the fifth minute of stoppage time before Jesus drove the ball past Wolves goalkeeper Rui Patricio to wrap up a 3-1 win.

The 44 goals were scored by 33 different players with 14 different countries represented. 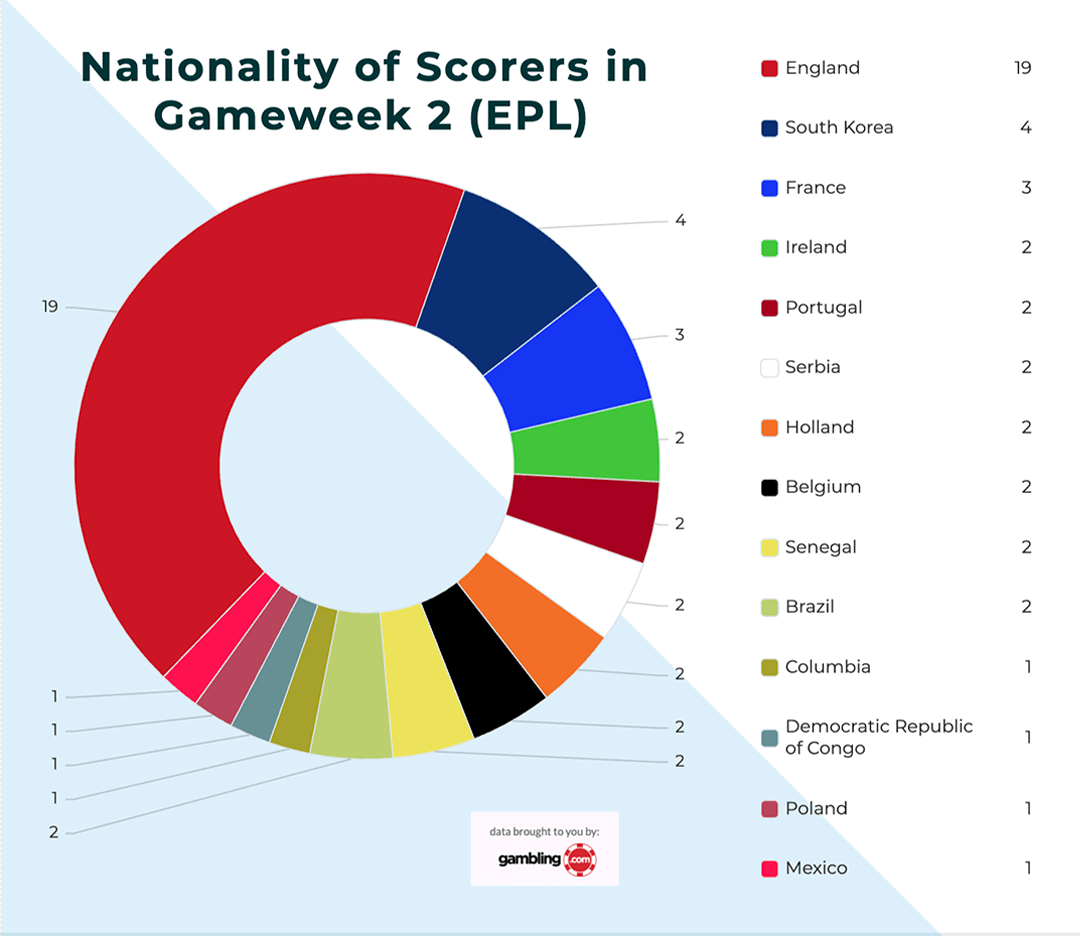 South Korea’s Heung-min Son grabbed the headlines with four goals for Spurs against the Saints.

Dominic Calvert-Lewin also took home a match ball after his hat-trick took his total for the season so far to four in two games for the Toffees.

Calvert-Lewin was one of 15 English players to find the back of the net. Calvert-Lewin and Son combined to score 15.9 per cent of the goals scored last weekend.

Read: How To Stay On Track in Fantasy Football

Aaron Connolly and Jimmy Dunne flew the flag for Ireland with goals for Brighton and Burnley respectively. Dunne’s goal, while it came in a loss at Leicester, came on his Premier League debut.

From a football betting perspective, eight of the 10 fixtures played would have seen over 2.5 total goals pay out while eight teams managed to score over 2.5 goals.

Only three teams failed to score so both teams to score landed in seven of the 10 games, while Everton, Tottenham and Leicester all came from behind to win.