Regarded as the most prestigious Grand Slam on the tennis calendar, Wimbledon has been no stranger to shock results down through the years.

The grass court major has helped form some of the greatest rivalries in sporting history, but it’s often the biggest upsets that stand out in Wimbledon folklore.

Here, our tennis expert Rory Jiwani picks out the most memorable shocks, including a 250/1 outright triumph in the 2001 men’s singles title. No reigning Wimbledon ladies’ singles champion had ever gone out in the first round until this earthshaking reverse in 1994.

Steffi Graf started her bid for a fourth consecutive title against Lori McNeil. In the days of just 16 seeds, the world number 21 was a player high on the list of ones to avoid early on at Wimbledon. Just over a week previously, she had beaten 1990 runner-up Zina Garrison for the second consecutive year in the final of the Edgbaston warm-up event.

Perhaps recalling that last encounter, the five-time champion was strangely subdued as McNeil attacked the net and the Graf backhand. The first of two rain delays came with the pair locked at 5-5 in the first set. After a 90-minute break, the American was handed the first set 7-5 by a Graf double fault.

The world number one broke early in the second and led 3-2 when play was halted again for a similar time. When they returned under grey evening skies, McNeil saved a set point at 3-5 with an ace before breaking Graf to level at 5-5.

It went to a tiebreak and Graf left the door open with a simple overhead into the net and a double fault. McNeil took advantage and claimed the tiebreak 7-5 to become the German’s first conqueror at Wimbledon since her childhood friend Garrison in the 1990 semi-finals. She went out in the last four to eventual winner Conchita Martinez. Graf bounced back the following year to take her sixth crown before retaining her title. Martina Hingis was the world number one and top seed as she started her bid to regain the title she won in 1997. Her first-round opponent was Australian youngster Jelena Dokic.

At the start of the year, top junior Dokic - then 15 - teamed up with Mark Philippoussis to win the Hopman Cup. She then reached the third round of the Australian Open on her Slam debut before going down 6-1 6-2 to Hingis who went on to claim her third consecutive title in Melbourne.

After turning 16, Dokic had to come through three rounds of qualifying to make the Wimbledon main draw. Then came a quick rematch with the five-time Slam winner whose temper tantrums in her recent French Open final defeat to Steffi Graf had raised eyebrows. Only 18 herself, the ‘Swiss Miss’ was feeling the strain and had arrived at SW19 without her mother and coach, Melanie Molitor.

Dokic had impressed Molitor enough to be invited to their home courts in Trubbach, Switzerland ahead of Roland Garros. She had family issues of her own with her father, Damir, kicked out of the Edgbaston warm-up tournament for cheering too loudly. After his expulsion, he ran in and out of traffic and climbed on a car, resulting in an arrest for drunk and disorderly behaviour.

It was clear from the outset that Hingis was the more vulnerable of the two. She managed to save three break points in the opening game but Dokic eventually made the breakthrough to lead 3-2. The Croatian-born prospect was hitting winners off both wings with Hingis unable to respond bar the odd killer drop shot.

Dokic was rampant with her unrestrained power from the baseline proving simply too much. Hingis did not win another game as the girl ranked 129 in the world cruised through 6-2 6-0 in just 54 minutes. She went on to reach the quarter-finals where she went out to fellow qualifier Alexandra Stevenson.

Sadly, Dokic’s father ensured his daughter never reached the heights her talents merited. In 2002, she fled her family and later revealed years of emotional and physical abuse. Hingis continued to win tournaments but failed to win another Slam singles title either side of her first retirement in 2003. A positive drugs test led to a second retirement in 2007, although she made a hugely successful return to doubles competition in 2013. Upsets usually refer to individual matches, but it would be a crying shame to leave out the greatest shock in Wimbledon betting history.

Goran Ivanisevic’s career went into freefall after 1998, the year of his third and most heartbreaking Wimbledon final defeat. A recurring shoulder injury saw the Croat slump to 125 in the World Rankings. He couldn’t even get past the first round of Australian Open qualifying but was generously handed a wildcard into the main draw.

Wins over former world number one Carlos Moya, a young Andy Roddick, former US Open finalist Greg Rusedski and reigning US Open champ Marat Safin saw Ivanisevic into the semi-finals. His conqueror in both the 1994 and 1998 finals - seven-time champion Pete Sampras - fell to 19-year-old Roger Federer in round four. The young Swiss then went out to home favourite Tim Henman.

With Sampras out, was this finally to be Henman’s year? Only Ivanisevic stood between him and a first Wimbledon final but the weather gods were against him. Henman raced through the third set 6-0 to lead by two sets to one on Friday when the rain came. Ivanisevic took the fourth set on a tiebreak on Saturday with the players forced off again after five games of the decider.

Then on Sunday, Henman’s serve - and nerve - failed him as Ivanisevic broke to lead 5-3 before serving out to take another famous win. He almost decapitated the umpire with his outstretched racket as he stood on a chair to celebrate. Pat Rafter would be his opponent in the Monday final with what seemed like all of Earl’s Court in Centre Court to cheer the Australian on. There were plenty of Croatia football shirts in the crowd too for a unique occasion.

Wimbledon had become more than familiar with Ivanisevic’s split personalities that fortnight. We mostly saw ‘Good Goran’ that day although ‘Bad Goran’ made a notable appearance in the fourth set. He thought he’d served a second-serve ace to save break point, but an “out” call saw him hurl his racket and kick the net in rage. Rafter served out to take the match into a fifth set.

Two powerful forehand returns put Ivanisevic up 8-7 in the decider, but serving out for the title was never going to be easy. There was something for everyone: a wild volley, a second-serve ace, three double faults - two of them on match point - countless signs of the cross and even crouching on the ground in prayer.

When Rafter saved a third match point with a sumptuous lob, you could almost see Ivanisevic’s heartbreaking. But somehow he gathered himself and clinched victory at the fourth attempt before collapsing with joy. The Monday final was magical in every way, including victory for the 250/1 pre-tournament also-ran. This one just edges Sergiy Stakhovsky’s win over Roger Federer in 2013 for a spot on this list. The Swiss legend had just started to show signs of decline (failing to reach the final at his previous three Slams) whereas Rafael Nadal was arguably at his peak.

After missing Wimbledon in 2009, Nadal’s record in Slams was Won 5, Runner-up 3, Semi-Finals 1, Quarter-Finals 2. Having brushed aside Thomaz Bellucci in round one, he was expected to have little difficulty against world number 100 Lukas Rosol.

But the Czech started brightly and should have taken the first set before Nadal nicked it on a tiebreak 11-9. Rosol was undeterred and broke to love at the start of the second set, the game sealed by a Nadal double fault. He was in the form of his life and took it 6-4 to level the match.

The third set went much the same way with Rosol again breaking serve early before holding on his own delivery on his way to another 6-4 scoreline. The Spaniard complained to the umpire about Rosol skipping on the spot, but he looked helpless against his opponent’s booming serve and withering forehand. Nadal did fight back in the fourth, capitalising on a couple of unforced errors to go 4-2 up before breaking again to take it 6-2 and force a decider.

As darkness descended, the players went off to allow the Centre Court roof to be closed. This was the first tournament with the retractable roof and, after a 43-minute delay, the players returned for the one-set shootout.

It was as if the fourth set hadn’t happened with Rosol coming out all guns blazing to put pressure on the Nadal serve. A blistering forehand brought up break point, and he produced another one to convert it. Rosol was playing like a man possessed with almost every shot flying off the middle of his racket. Unfathomably, he had one of the greatest baseliners in tennis history chasing shadows.

Nadal had no response as Rosol continued to bash winners. At just after 10pm, the outsider served for the match. Surely the nerves would get to him now? Not a bit of it. He needed just six hits, including three aces, to secure victory 6-4 in the decider against the double Wimbledon champion.

Rosol went out in the next round to Philipp Kohlschreiber and has never reproduced the shot-making he did on that Friday evening. Nadal is yet to return to the Wimbledon final, although he has done pretty well on other surfaces. 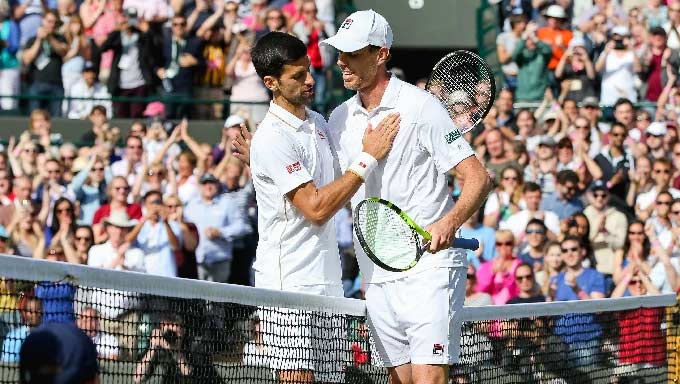 Fresh from winning his first French Open to hold all four majors at once - the ‘Nole Slam’ - Novak Djokovic was a warm favourite to claim a hat-trick of Wimbledon titles. With Rafael Nadal out injured and Roger Federer without a Slam victory for four years, Djokovic was the man to beat.

In round three, he met 28th seed Sam Querrey. The big-serving American was enjoying his best year on the tour but he was 25/1 to beat the world number one. He made a mockery of those odds, taking the first set on a tiebreak before overpowering Djokovic 6-1 in the second.

Rain curtailed play on Friday night with the players returning on Saturday. The Serb charged out of the blocks, going into a 4-0 lead before surviving a slight wobble to take it 6-3. The fourth set went with serve until Djokovic broke to lead 5-4 but, as befitted his listless display, handed it straight back with a tame forehand volley into the net.

Querrey made it 6-5 before the heavens opened again. Djokovic held to love on their return to set up another tiebreak and went into a 3-1 lead. But the Las Vegas native was too strong, taking it 7-5 to complete a huge upset. Djokovic may have been carrying an injury but, even so, the end of his 30-match unbeaten Grand Slam run was a shock few expected.

Querrey went out to eventual runner-up Milos Raonic in the quarter-finals before dumping out defending champion Andy Murray the following year to make the semis. Djokovic recovered from a slump in 2017 before bouncing back to win his fourth Wimbledon title in 2018, the first of three consecutive Slam crowns, and then added his fifth Wimbledon win in 2019.

© PA
Can Roger Federer Win Olympic Gold at the Age of 39?

© PA
Who Will Win Time Person of the Year For 2021?
© PA
How Long Will Boris Johnson Last as UK Prime Minister?

© PA
The Full Story of Bruce Grobbelaar's Betting & Bribery Scandal
© PA
Rishi Sunak Favourite To Replace Boris Johnson As Prime Minister
© PA
Betting Opens On Joe Biden Completing Full Term Of Presidency
© PA
Who’s Favourite To Win Strictly Come Dancing 2021?
By continuing to use our site you agree to us using cookies in accordance with our Cookie Policy .
Got It
×