As English put the finishing touches to the horse that built his Grougha Stables, on Mornington Beach in Ireland, Gambling.com caught up with the trainer, his brother Craig, and jockey Vanessa Maye to find out what makes Geological such a special horse racing story.

She quickly snapped up the opportunity to accompany him to Dubai, where he has been accepted to race with the world's best during the 2020 Dubai World Cup Carnival, which includes some of the richest horse races in the world.

It is an incredible rise for Geological, and English could not be happier with how his star has settled in to life in the UAE, where he has now been for two weeks.

"He seems to be loving it over there," he said. "He looks a million dollars this winter. You can see that even from the videos of him rolling and just looking so relaxed that Vanessa is putting up on Twitter. He's in great form and I can't wait to get over myself." 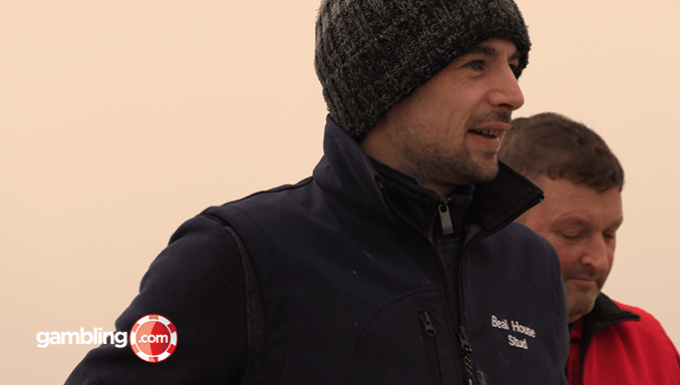 English, 33, will travel to Dubai this week, with Geological set to make his Meydan debut in a US$135,000 6f handicap on the third Thursday night of the Carnival - January 16. English hopes that performance will then be bettered on his second run over 7f.

He said: "He runs on January 16. That's his first run and it's only 6f, so he might just need it to sharpen him up. We'll see how he comes out of that and he'll then run over 7f."

"He knows he's a racehorse"

In the above video interview with him, the trainer spoke about why he thinks he has been able to get so much out of a horse that leading British trainer Richard Hannon sold for merely £840.

“He knows he’s a racehorse," he said. "I think our way of training just suits him. We don’t do it like anyone else would, we’ve no walkers, it’s all short sprints on the beach."

As for his love for his female companion Maye, who will ride him in Dubai, trainer English continued: "He just gallops so much for the girls. He can be a bit of a bully and likes being the boss, and they just sit so quietly on him. It really helps him."