What Could The Return Of Dennis Bergkamp Bring To Arsenal?

Mikel Arteta, more than anyone, knows the role of assistant manager is not a position for life. The Arsenal boss was installed in his current post last December after a spell as No.2 to Pep Guardiola at Manchester City. Without those three-and-a-half years’ experience at the Etihad Stadium, Arteta might not have been given the chance to lead Arsenal.

Freddie Ljungberg is hoping his spell as the Gunners’ assistant manager similarly works in his favour. The Swede was briefly interim manager following Unai Emery’s sacking last November, before serving as Arteta’s assistant for the remainder of the 2019/20 campaign.

The season ended successfully for Arsenal, who beat Chelsea in the FA Cup final after an underwhelming eighth-place finish in the Premier League.

Arsenal will be aiming to improve on that position this term, but Ljungberg will not be around to help them. The club legend, who previously worked as manager of the Under-15s and Under-23s, has departed the Emirates Stadium in a bid to further his own coaching career.

“Freddie has worked with the Under-23s and has had other roles at the club, including a stint as the interim manager of the first team, and a coaching role within the first team as well,” former Arsenal defender Nigel Winterburn told Gambling.com in an exclusive interview.

“It probably depended on where he wants to go from here, with Mikel Arteta coming in with his own assistant perhaps a few opportunities were closed off for Freddie and he may have felt that the only way to move forward with his own career if he wants to go in to management full time was to step away from Arsenal and look at other opportunities. If I’m honest, it didn’t surprise me at all.”

Arteta, for his part, sent Ljungberg his best wishes, saying: “I know I’ll be facing him on the touchline in the future.”

The Spaniard must now turn his attention to choosing a new right-hand man, just as Guardiola had to do when Arteta vacated his position in Manchester. The City boss ultimately plumped for Juanma Lillo, a man he has long considered a mentor and a positive influence on his career. Arteta has not yet made a decision on his next assistant, but one name linked with the job in recent weeks is Dennis Bergkamp.

It is not hard to see why. Arteta is a former Arsenal player, as is technical director Edu. Bergkamp spent longer with the club than both of them combined, racking up 11 years of service between 1995 and 2006. He is widely considered one of the greatest players in the club’s history, having been a key part of each of Arsene Wenger’s three title-winning teams. Bergkamp also won three FA Cups with the Gunners, for whom he scored 120 goals in 423 appearances in all competitions.

“I’m a big advocate for players that have been successful at your club – so long as they have the right coaching credentials – to come back in to a football club, particularly one of Dennis Bergkamp’s ilk,” said Winterburn.

“He was a wonderful player who won a lot of trophies and is well regarded within Arsenal, so if his coaching credentials match up with what Mikel Arteta wants, he could potentially come back to the club in some sort of role, whether it’s at junior level or senior.

“It’s been mooted a few times now so I think it’s something we’re going to have to watch to see if it develops into anything.”

As Winterburn hints at, having a fruitful playing career with a club is no guarantee of success in another capacity. But while Edu and Arteta got their respective jobs on merit, it is also fair to say their credentials were boosted by their histories with the club. Bergkamp’s candidacy would no doubt benefit from something similar. 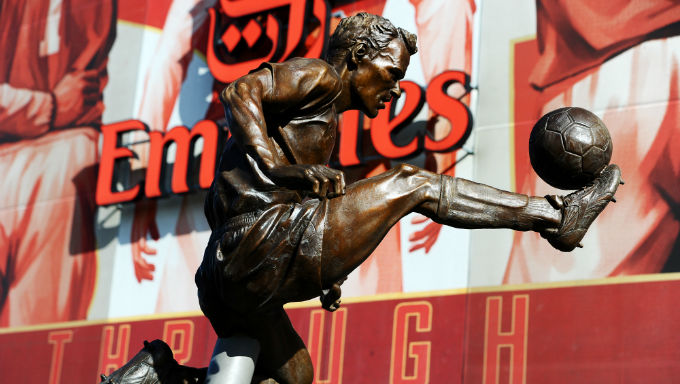 This would not be a case of Arsenal simply hiring a club icon on account of his playing exploits, though. Bergkamp has ample experience as an assistant manager, having filled that position at Ajax – another of his former employers – for six years between 2011 and 2017. Upon hanging up his boots Bergkamp had initially insisted he would not remain in the game, but his desire for frontline involvement ultimately proved too strong.

His first role had come as the No.2 to Johan Neeskens with the Netherlands B team, before Bergkamp returned to Ajax as manager of the Under-12s, after which he served as head of the Under-19s. Frank de Boer was the man who first promoted him to assistant boss of the senior side, and Bergkamp also worked alongside Peter Bosz prior to his exit in 2017. However, he was never as prominent during Bosz’s tenure as he was during De Boer’s, with Bergkamp absent from the dugout on matchdays and largely restricted to working with the players on the training ground.

Unlike Ljungberg and Arteta, Bergkamp’s time as an assistant does not appear to have whetted his appetite for a head coach position. That is probably reflective of his personality; while Bergkamp brings great authority through his achievements in the game, he is not a natural leader. The Dutchman would command instant respect at Arsenal, but he definitely appears best suited to a support role as a No.2.

That could work well for the Gunners, particularly if they believe Bergkamp is in it for the long haul. A player who was famed for his technical excellence and game intelligence would have plenty to offer Arsenal’s current squad, and his experience working with young players would be an asset given that Arteta seems keen to promote from the academy.

It is difficult to make a definitive judgment on an individual’s training-pitch ability without being privy to it, but it is easy to imagine Bergkamp being adept at working closely with players on specific aspects of their game. With Arteta in charge of bigger-picture philosophy, it could be a productive partnership.

There are a couple of areas of concern, however. First, Bergkamp has been out of the top-level game for three years and his apparent lack of appetite to jump straight back in following his Ajax exit does call into question his priorities. His only gig in the last three years has come at Almere City, a second-tier Dutch team, and the primary reason for his involvement there is the fact his son is on the books.

Perhaps Bergkamp is only interested in coaching positions at one or two clubs that are close to his heart, but Arsenal will want to make sure he is willing to dedicate himself to the role before they consider hiring him as Arteta’s No.2.

However, his six-year spell at Ajax does indeed suggest he is ready to commit to the right opportunity, and he already admitted being excited by the prospect of a return to the club where he spent most of his playing days in a recent interview with FourFourTwo.

Another issue is Bergkamp’s well-publicised aviophobia. His fear of flying ruled him out of many of Arsenal’s European fixtures down the years, and it is certainly less than ideal to have an assistant manager who might not be able to attend a significant chunk of his club’s matches in any given season. Of course, this would not really affect Arsenal in domestic competition, but it is something they must consider.

It need not be a deal-breaker, though. Bergkamp would still be able to participate fully in the preparation for European games, and Arteta will have other members of support staff around him even when the Dutchman is unable to join up with the squad by train or car. If the Spaniard and the football club believe Bergkamp is the best fit for the role, his fear of flying is an obstacle Arsenal will be able to get around.

Arteta will probably take his time before making a decision on who his next assistant will be. Guardiola did exactly that in his search for a successor to Arteta, only appointing Lillo six months after the former’s exit.

A manager and his No.2 must have good chemistry for the partnership to work, and something like that is impossible to predict from the outside. But presuming the duo do indeed get on well, Bergkamp ticks several boxes: he would instantly receive respect from the Arsenal players, he has significant coaching experience in the Netherlands, and he is known to be a deep thinker about the game.

Arsenal could do far worse than replacing Ljungberg with his former team-mate.