Will Arsenal’s Unbeaten Premier League Season Ever Be Matched?

Before a ball was kicked this Premier League season, Liverpool had been given a price of 50/1 to go the whole league campaign without defeat.

Considering they had lost only one game the previous season, bookmakers took a measured approach towards the prospect of the Reds doing what only one team has managed in the Premier League era.

But despite Liverpool and Manchester City raising the bar in recent seasons – racking up three of the highest ever points tallies in top flight history between them – neither of these two sides have been able to match Arsenal’s ‘Invincible’ campaign of 2003-04.

Earlier this season, as Liverpool marked 38 games unbeaten during what would turn out to be a 44-game spell without defeat, we compared Arsenal’s invincible season with the Reds’ 38-game run across two seasons, and Jurgen Klopp’s side’s stats fared a lot better.

However, Liverpool were not able to match Arsenal’s record 49-game unbeaten run across multiple seasons and, more significantly, couldn’t go a full league season unbeaten, losing at Watford in February and losing again at Manchester City after the re-start in July.

Not even Manchester City’s ‘Centurions’ – who recorded the highest ever points tally in English football with exactly 100 points in 2017-18 – could match Arsenal’s unbeaten achievement, but critics of the Gunners have been quick to point out how many draws (11) Arsene Wenger’s team registered.

Nonetheless, former Arsenal defender Nigel Winterburn – who once went a full league season suffering only one defeat – insists the Invincibles of 2003-04 deserve more respect than ever as Liverpool and Manchester City have only proven how hard it actually is to go unbeaten in a full league campaign.

“It’s incredibly hard to do,” Winterburn told Gambling.com. “The Arsenal team I was a part of in 1991 won the league by losing just one game.

“People talk about how fabulous this Liverpool team are – and they are, they’ve just walked away with the league – but it just goes to show you how difficult it is to maintain that level of intensity and focus for 38 games.

“It’s almost impossible at Premier League level. I say almost because Arsenal have actually achieved it, but I think how well Liverpool and Manchester City have performed over the past two to three seasons without going unbeaten just puts Arsenal’s achievement into an even greater perspective.”

Arsenal fans are incredibly proud of their Invincibles team, understandably so, and the longer the Premier League continues without anyone matching their achievement the better in their eyes.

“I was always confident, from an Arsenal point of view, that Liverpool would lose a game, mainly because they were so far ahead in the league,” admitted Winterburn ahead of Arsenal and Liverpool’s meeting at the Emirates on Wednesday.

“When you mathematically secure a title, for some reason, no matter how the manager talks to you and no matter how professional you want to be, you realise that everything you worked for to win the league has been achieved, and it just makes you drop your guard a little for the rest of the season.

“We saw it with Liverpool themselves when they went to Manchester City and got thumped 4-0 by another fabulous team. I did get a little twitchy earlier in the season when they looked unstoppable, but I was quietly confident they’d slip up somewhere along the lines.” 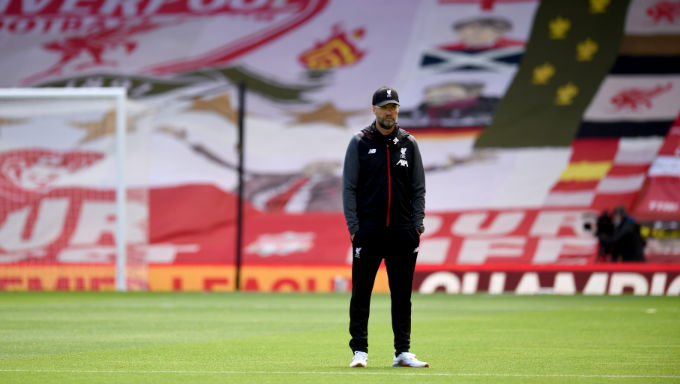 Arsenal and Liverpool meet in north London on Wednesday night with both sides looking to bounce back from disappointing results at the weekend. Liverpool lost their 100% home record by drawing 1-1 with Burnley while Arsenal lost 2-1 to bitter rivals Tottenham.

Against Spurs, Gunners boss Mikel Arteta made a surprise move by relegating teenage prospect Bukayo Saka to the bench, with the 18-year-old’s recent form having been rewarded with a new long-term contract.

However, a goal and an assist in his previous two games against Wolves and Leicester was not enough for him to earn a place in the line-up against Tottenham, though Winterburn is just happy Arsenal have tied the young English talent down to a new contract.

“I remember speaking to Freddie Ljungberg at an Arsenal Under-21 game when Saka hadn’t even made his debut for the U21s,” he said. “I was asking him who is he most looking forward to seeing in the first team, and he had no hesitation in saying this boy Saka would make the first team.

“He told me he was so level-headed for his age, has a good attitude and all the attributes to make an impact at the top level once he got his opportunity. I think we’ve seen already that Freddie was right, he’s got a huge amount of talent – he’s fearless and can play in several positions and looks comfortable in any one of them.

“Arsenal had to get him signed up and it gave everyone a lift when he put pen to paper. They couldn’t have allowed to let a young talent of that calibre walk away from the club. The reaction of the fans, had that happened, would have had a devastating impact on the club, so I’m very pleased that he’s signed a good deal.

“It also should give other young players at Arsenal hope of being able to break through.”

Meanwhile, Arsenal face competition from AC Milan and Valencia for the services of Dani Ceballos next term, with Arteta understood to be keen to extend his compatriot’s loan stay by a further season.

On loan from Real Madrid, Ceballos initially struggled at the Emirates under Unai Emery but has enjoyed a new lease of life under Arteta and Winterburn would like to see the adventurous 23-year-old given a chance to shine under his new manager over a full season.

“You can look at passing stats and say ‘this player has completed 95% of his passing today’ but how effective was his passing? That’s what counts. Ceballos is a player who is happy to take a risk with a pass, and maybe that means he has a lower percentage of passes completed but at least he’s trying to make things happen and often he does.

“Sometimes you need a player, either starting or on the bench, who is willing to take those risks, and Ceballos won’t shy away from that.”

The Gunners are languishing in 9th place in the Premier League table ahead of the visit of Liverpool, but the FA Cup semi-finalists are still in the hunt for European football next season, though their title credentials for 2020-21 have already been written off with odds of 80/1 widely available.

© PA
Have Local Derbies in The Premier League Lost Their Edge?

© PA
Which Teams Face The Toughest Starts in the Premier League?

© PA
What Could The Return Of Dennis Bergkamp Bring To Arsenal?

© PA
Should Arsenal Pawn Alexandre Lacazette While They Still Can?

© PA
Virginia Sports Bettor Bill of Rights Should Just Be a Start
© PA
How Long Will Boris Johnson Last as UK Prime Minister?
© USA Today
Indiana Sportsbook Options Grow With theScore Bet Launching
© USA Today
AGA & NASCAR Team Up on Responsible Sports Betting Effort
By continuing to use our site you agree to us using cookies in accordance with our Cookie Policy .
Got It
×