Saudi Arabia is the controversial theatre for the latest act in the grand old opera of heavyweight boxing on Saturday 7th December. A purpose built stadium plays host and offers an unwelcome echo from the original golden age of boxing when eager investors brought the great Jack Dempsey and Tommy Gibbons to Shelby, Montana and almost bankrupt the entire town in 1923.

The 15,000 open air arena in Riyadh is unlikely to trouble the infinite wealth of those who built it and invited boxing to it’s exclusive back garden. It will be an unlikely stage for Anthony Joshua to try and reclaim the belts he lost in New York to the same American, Andy Ruiz Jnr, he faces on Saturday.

For all the historic significance of the titles the two will battle for, the fight means more than just the prizes to Joshua. It is about the restoration of the truth he still believes, that he is best heavyweight on the planet and his defeat in June was an aberration. A fluke.

Victory would certainly reassert his place among the highest echelon of the division and reignite interest in potentially defining fights with Tyson Fury and Deontay Wilder in 2020. A second defeat to the previously unheralded Ruiz may prove a blemish too far and forever extinguish Joshua’s hopes of transcending the sport’s history and diminish the notion the trio could yet create a new golden era in the flag ship weight class.

It really is, all on the line for the 2012 Olympic Champion. Boxing betting sites are thankfully eager to offer markets.

Whether unified or divided, the heavyweight title has travelled the world before. Some of the sport’s most iconic moments have been contested in a eclectic travelogue of the exotic and egregious; from the despotic guarantor who financed the Rumble in the Jungle in 1974, to The Thrilla in Manilla of ‘75 and stops offs in Kiev, Kuala Lumpur, Johannesburg and more along the way.

Clash In The Dunes

The heavyweight championship, and its multitudinous claimants, always follow the money, irrespective of the compromises unseemly wealth often demands.

Clash in The Dunes, as the fight is billed, is unashamedly pursuant of the transcendent significance those historic events have boasted. It aims to etch similar permanence into the memory and soul of the global audience who will tune in and, sublimely, continue the extravagant rebranding of the much criticised Saudi regime. Joshua just wants to win a fight, claim the oil money on offer and restore the lustre of the Anthony Joshua brand he has polished so conscientiously this past seven years.

Despite the tactical flaws Ruiz exposed in the statuesque Brit in their tumultuous first encounter, Joshua once again enters fight week as a notable, if not prohibitive favourite, at 4/9 with Ladbrokes. It is the kind of margin that suggests bookmakers are convinced Ruiz was ‘lucky’ in his stoppage victory. 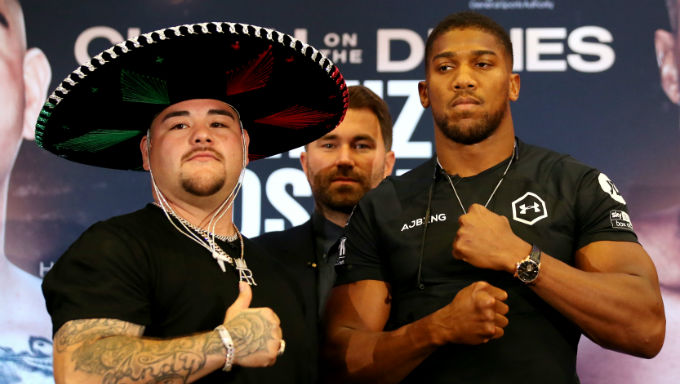 That favourite tag silently contends that Joshua will be more focussed, better prepared physically, and more able to out punch the shorter man second time around.

To conclude such is to ignore the stylistic problems Ruiz presented. Quicker of thought and deed, Ruiz belied his Mall Cop physique to throw effective shots, countering the taller man repeatedly and landing combinations on the inside with impunity. It wasn’t without drama of course.

Joshua came close to knocking out the 30-year-old in the 3rd round before being caught himself with a retaliatory hook that completely changed the momentum of the fight. Ruiz caused Joshua problems of timing, decision making and raised concerns about Joshua’s remaining desire throughout the fight. This was not a lucky punch win.

Worryingly, and with similarities to former WBC Heavyweight champion and Joshua’s fellow countryman, Frank Bruno, he was unable to adapt, to respond or to neutralise Ruiz’s attacks. Eventually, he was stopped, although somewhat contested by the fighter himself, in the seventh round.

Joshua To Rue Ruiz Once Again

Can Joshua Fix His Flaws In Five Months?

It is hard to summon how Joshua can reconstruct his defence, and offence for that matter, to negate Ruiz’s advantages in hand speed, decisiveness and technical prowess. Joshua is not the seasoned professional his championship status urged us to believe, nor has he been able to leap from his natural, aggressive style to the more polished fighting persona he feels he should adopt to preserve his faculties and earning potential.

He’s tried to hard to be something he feels he should be, rather than fighting more naturally, more instinctively – a style that capitalises on his natural athleticism and destructive power and is at peace with the opportunities this aggression offers opponents.

Rematches tend to follow the pattern of the first fight, often more decisively. To that end, and with value in the odds due to Joshua’s popularity, a bet on Ruiz to repeat the success of June 1s is my recommendation. He is 21/10 with Paddy Power and that really interests me. That conclusion muses that Ruiz will be more confident in this return and with the Joshua aura eviscerated he can repeat the win, and potentially knock out a crest fallen Joshua once again.

Clear among the ‘bumper-sticker’ philosophies Joshua is prone to answering questions in, is just how problematic the 30-year-old is finding the reality of defeat and loss of control of the narrative of his career. To win, there is wisdom in the theory he must deploy his natural advantages of size, power and reach from a distance.

The theory is too simplistic, the gap he will seek in this strategy requires perfect footwork and ignores the instinct for a fight Joshua tends to display. He tried to box at range versus Alexander Povetkin, a fighter with heavier fists but slower feet than Ruiz, and the veteran Russian came close to unseating the then unbeaten Joshua himself.

Victory will be accomplished by forcing Ruiz backward, by dominating him physically and taking the leverage away from Ruiz’s counter punches. It remains a strategy with risk, after all Joshua knocked down Ruiz in the prelude to the punch that disorientated him back June, but will offer Joshua his most likely route to victory and to the redemption he very obviously needs.

A Joshua stoppage offers narrow margins, but William Hill enhance their odds to 9/4 on Joshua winning in rounds 1-6.

The value remains in backing Ruiz to repeat his triumph at 21/10 outright with Paddy Power.