Can Other Award Nominations Find Value In Oscars Betting?

Can you predict who will win Best Actor and Best Actress at the Oscars just based on the nominations for the other 'Big Three' awards? Well, we've crunched the numbers and you can.

Nominations were revealed this week for the Critic's Choice, Screen Actor's Guild and Golden Globe Awards, the three major movie awards that precede the Oscars, which take place next year on Sunday, February 9.

They naturally caused shake-ups in the Oscars betting, as The Joker, Joaquin Phoenix hardened to 4/9 at the head of the Best Actor odds, having been one of just two actors nominated for the equivalent award at all three.

Renée Zellweger is also odds-on favourite to win Best Actress at the Academy Awards for her portrayal of Judy Garland in the film Judy, having again featured in the nominations for all three of the other big awards nights.

But it's not the betting that we have followed in a bid to find the early value in the odds for these prestigious Oscars. There are very solid Oscars trends, surrounding previous nominations, that have highlighted two very strong contenders to take the 2019 major acting Oscars over our hot favourites.

But First: Do Stats Work On Oscars Betting?

Professor Jeff Smith from the University of Wisconsin-Madison used trends to predict the winners of Best Actor, Best Actress and Best Picture(!) at last season's Oscars on the Gambling.com Group podcast, Badder Beats

We are going to break down the key Oscars stats and trends below, but here is what Smith believes is key to finding the winners of Best Actor and Best Actress - and remember, he picked shock winner Olivia Colman last year, as well as siding with Rami Malek and Green Book.

"There are some things which really do tend to help with predicting," Smith told the Gambling.com group. "They are not guarantees, but as a rule of thumb for Best Actor, if you play a real person, it seems to increase you chance of winning.

"The other factor is that if that real life person is dealing with some kind of obstacle, for Rami Malek as Freddie Mercury it was sexual orientations and he eventually contracted the aids virus."

He added: "When it comes to best actress, once again we’ve got the question of do we have real historically people? The other factor is, is the award perceived as recognition of a whole career, or this individual performance?

"When you look at the first Oscars for example, there were awards for multiple performances - Janet Gaynor won the award for 7th Heaven, Street Angel, and Sunrise for example.

"Nowadays, it’s one of the those unofficial things, and a good example is a couple of years ago when Julianne Moore won for Still Alice. I found it hard to find anyone who had watched it, so that appeared to be for a career of work, not just that film."

Smith warns with that latter factor that it's wise not to rule out an actress based on the performance they have been nominated for, especially if they have been at the top for a while and not yet won an Oscar.

All of the last 20 winners of the Oscars Best Actor title had previously been nominated for the equivalent prize at the Screen Actor's Guild awards, and in fact, nine of the last 10 winners won the SAG crown.

In the last 20 years, the SAG winner went on to win the Oscar 16 times, so it appears imperative that the judging panel at those awards recognises you, if you want to be noticed by those judging the Academy Awards.

Next up are the Golden Globes, where nine of the last 10 Oscar winners were nominated, and won both, then there's the Critic's Choice Awards, who have nominated the Oscars Best Actor winner in 18 of the last 20 years, and all of the last 10.

In fact, only once in the last 10 years was the Oscars Best Actor winner not nominated for all three preceding major awards, and during that period six actors took the title at all four, with a further two winning the Golden Globe, SAG and Oscar.

It's clear then that nominations for the Golden Globes and SAGs are most important to Best Actor at the Oscars, but it is also preferential to have been nominated for all three.

The next major statistic that can be applied right now to the Oscars Best Actor market is that seven of the last 10 winners were nominated for playing real people. Last year it was Rami Malek as Freddie Mercury, the year before Gary Oldman as Winston Churchill, and before that the likes of Daniel Day Lewis as Abraham Lincoln, and Eddie Redmayne as Stephen Hawking.

The last man to win Oscars Best Actor playing a fictional character was Casey Affleck in Manchester By The Sea, a heartfelt, moving drama, about a man suddenly entrusted with his nephew after the death of his brother.

The success of this hard family story is reflected this year in Marriage Story, a tale about the breakdown of a marriage, for which lead actor Adam Driver has received three major nominations, and is now second-favourite to land the Oscar. He would buck the trend, but at odds of 4/1 with BetVictor could do it.

Driver has won neither, but the man best fitting the Oscars Best Actor trends profile at this early stage is Christian Bale, for his portrayal of Ford's British racing car driver and engineer Ken Miles in the Ford v Ferrari film Le Mans '66 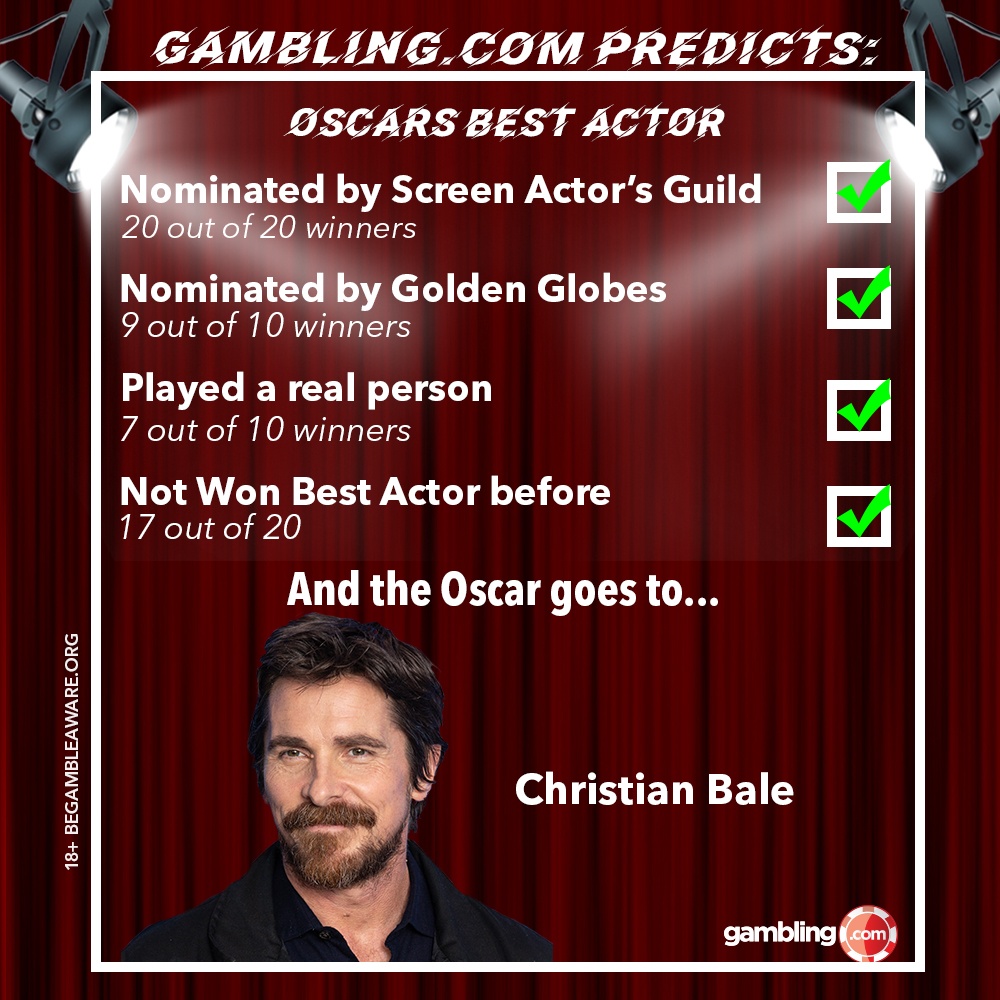 Bale, already tipped up by our specials tipster Roy Brindley, has the three key nominations, plays a real person, and has never won Best Actor, though he did win Best Supporting Actor in 2010 for again playing a real person, professional boxer Dicky Eklund, in The Fighter.

He is a best price 9/1 for the Oscar with Paddy Power and, though Ken Miles doesn't quite have the personal struggles of Freddie Mercury, you can bet Bale won't be anything like 9/1 if he takes the first of the big prizes, the Golden Globe on January 5.

All of the last 20 winners of the Oscars Best Actress title had previously been nominated for the equivalent prize at the Screen Actor's Guild awards, just like in the men's game, though only eight took the SAG crown.

When looking at the last 20 years, that number increases to five, so it is not a negative for an Oscars Best Actress hopeful to be missing from the Golden Globes' nominations, as long as they are in the SAGs and in the Critic's Choice list, which has contained the Oscar winner in all of the last 10 years - and 18 of the last 20.

Four women this year received three nominations - Renée Zellweger, Cynthia Erivo, Charlize Theron, and Scarlett Johansson - with Lupita Nyong'o receiving two, minus the Globes. At 20/1 with Paddy Power, she could be an outside bet, but does not fit another of our key Best Actress stats.

Only three of the last 10 Best Actress winners at the Oscars had previously won an acting Oscar, two having already won Best Actress, and another landing the prize for Supporting. In fact, only four of the last 20 had achieved this feat.

What rules three of the triple-nominated candidates out is our final trend; in stark contrast to Best Actor, only three actresses who played real people in the last 10 years won Best Actress at the Oscar.

In that time, 34% of Oscars Best Actress nominations were women playing real characters, and 18% of them won versus 21% of the 33 nominations who played fictional characters. This is a modern trend that has developed in the last 10 years, the previous 10 years awarding the crown to seven performances acting real people.

It was briefly halted by shock winner Olivia Colman as Queen Anne last year, but digging deeper, we can see that on six occasions in the last 10 years, there were two or three real people performances amongst the Oscars Best Actress nominations, and only three won.

The only actress amongst those with three nominations, who has never won an Oscar and plays a fictional character is Scarlett Johansson. She would be receiving her very first Oscar nomination if making the shortlist for Best Actress this season, but she is hotly-tipped to do so, priced at 9/2 second-favourite with Betfair for the title. 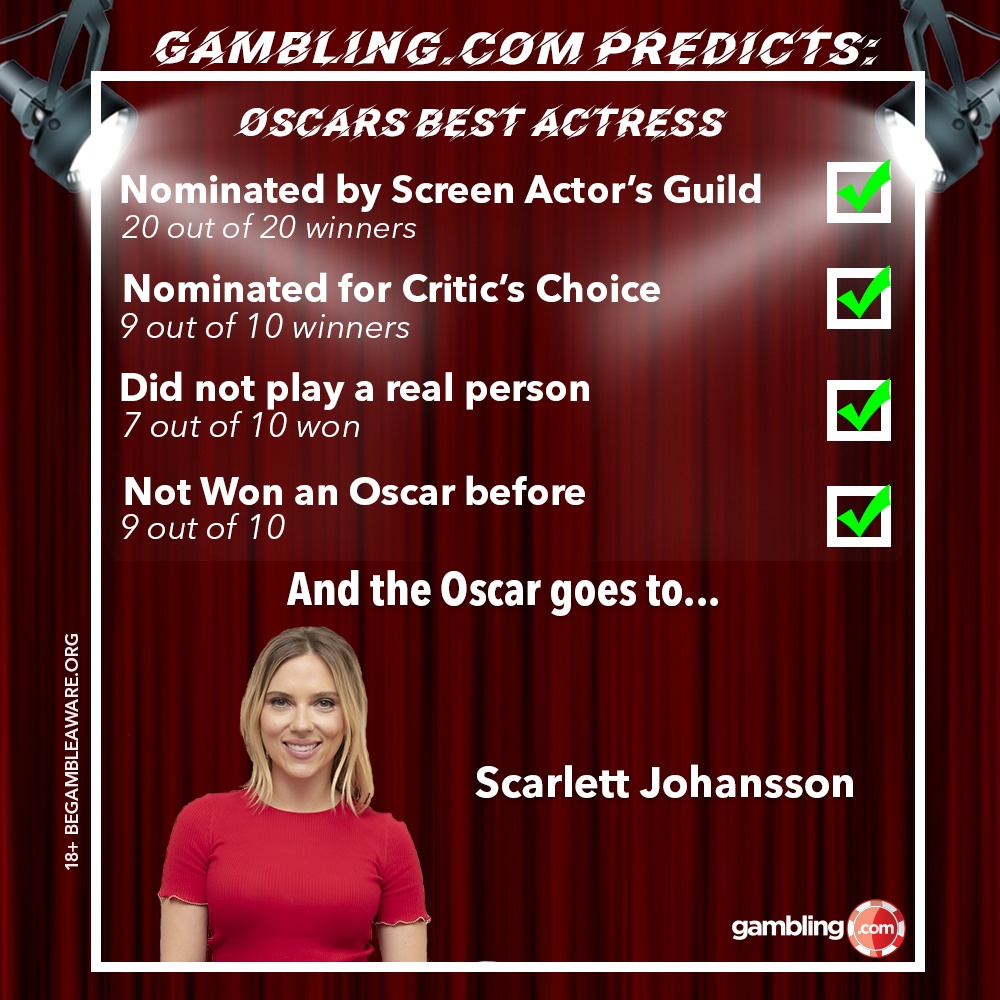 She has been nominated many times for the Critic's Choice and Golden Globes, without winning, and is this year amongst Screen Actor's Guild nominations for the first time, potentially set to land Best Actress, Best Supporting Actress, and Outstanding Performance by a Cast at those awards.

She's also only 11/5 second-favourite with Bet365 to win Best Actress at the Golden Globes on January 5. It is far from over if she does not land that prize, with Oscar nominations not released until the day after the Critic's Choice Awards ceremony on January 12. But if she does win it, those odds of 9/2 about the Oscar win will be long gone.