On Saturday night at the Barclays Center in Brooklyn, New York, a new era of the UFC will be ushered in: the ESPN era.

The first UFC Fight Night on ESPN+ marks the beginning of the UFC’s five-year contract with The Worldwide Leader in Sports, and they are kicking things off with a bang, headlining the card with bantamweight champion T.J. Dillashaw dropping down to 125 pounds to become the fourth person to ever hold titles in two weight classes at the same time.

Standing in his way is flyweight champion Henry Cejudo, an Olympic gold medalist wrestler fresh off of upsetting the Greatest Fighter of All Time, Demetrious Johnson. It’s a big event and big bets are sure to follow.

Fans of MMA betting, start your 2019 off right with the best bets available, employing the best MMA betting strategy.

Henry Cejudo is already in a class all by himself. He’s the only person to have ever won Olympic and UFC gold, and both of those victories are constructive for this bout because Cejudo was not favored to win either.

Cejudo qualified for the U.S. Olympic team at 21, and while he was obviously extremely gifted, Cejudo was not expected to leave the 2008 Olympics with a medal, much less a gold.

Similarly, Cejudo had already lost to Demetrious Johnson once before they fought at UFC 227, and there was no real reason to think things would be different.

In both instances, Cejudo proved the doubters wrong and he will have a chance to make it 3 for 3 on Saturday. To do that, he will need to rely heavily on the best facets of his game: his otherworldly wrestling and athleticism.

Dillashaw is no slouch as a wrestler, but there are levels of this stuff and Cejudo is several steps up on the bantamweight champion. He needs to use those levels, and level changes, because Dillashaw is definitely the superior striker of the two.

Cejudo is a competent boxer, with extremely fast hands and explosion dating back to his early love of boxing (even winning a Bronze Gloves) at one point, but Dillashaw is among the best strikers currently competing in MMA, utilizing a complex understand of rhythm, angles, movement, and combinations to mostly flummox the people standing across the cage from him. 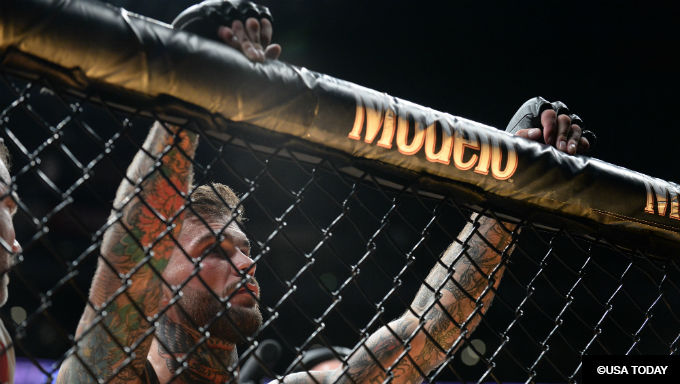 Dillashaw is still hittable on the feet, so Cejudo will need to keep him honest standing, but grinding the bantamweight down with wrestling and taking advantage of the fact that Dillashaw has never cut to 125 pounds before is the clear path to victory for Cejudo.

Conversely, Dillashaw just needs to do what he does to walk away a double champion. His timing and variety on the feet will give Cejudo problems from the start and if he can stay upright for most of the fight, he has an excellent chance to win.

Dillashaw would also be best served to attack the body and legs early and often. Cejudo has shown a vulnerability to body attacks in the past and attacking those areas should slow the flyweight champion down and mitigate his advantages in speed and cardio, opening him up for more damaging strikes later in the fight.

The real question surrounding this fight, the single biggest factor in making your betting determinations, is Dillashaw’s weight cut. Dillashaw has never cut to 125 pounds before and the general rule is that cutting weight gets harder the smaller you are.

Dillashaw maintains that he will have no problem making weight for the fight and that he feels fantastic, but he definitely looks more drained and a tick slower than normal in all of his pre-fight workouts. If you believe him, then taking Dillashaw straight at -215 with 888Sport is a worthwhile bet.

But if you are like me and think the cut to flyweight was a bad idea, Cejudo at +175 is mighty enticing.

Even more enticing for Cejudo backers though is the Cejudo by KO/TKO prop at +700 with Karamba. A wrestling heavy attack is Cejudo’s most surefire way to win but the damaging part about cutting weight is that is drains the water from your brain.

This has a tendency to make fighters much more susceptible to getting knocked out and with the speed advantage Cejudo has, stopping Dillashaw with strikes later on in the fight is a real possibility.