The World’s Most Extreme Sports

When you think of extreme sports, what comes to mind? Skateboarding? Paragliding? Well, it turns out that there are many more that can lead to extreme injuries, and we’ve looked into them all.

Based on how likely you are to pick up a gnarly knock doing a totally radical sport, dude, this study reveals the most extreme sports in the world.

Skateboarding, mountain biking and jet skiing some of the world’s most popular extreme sports 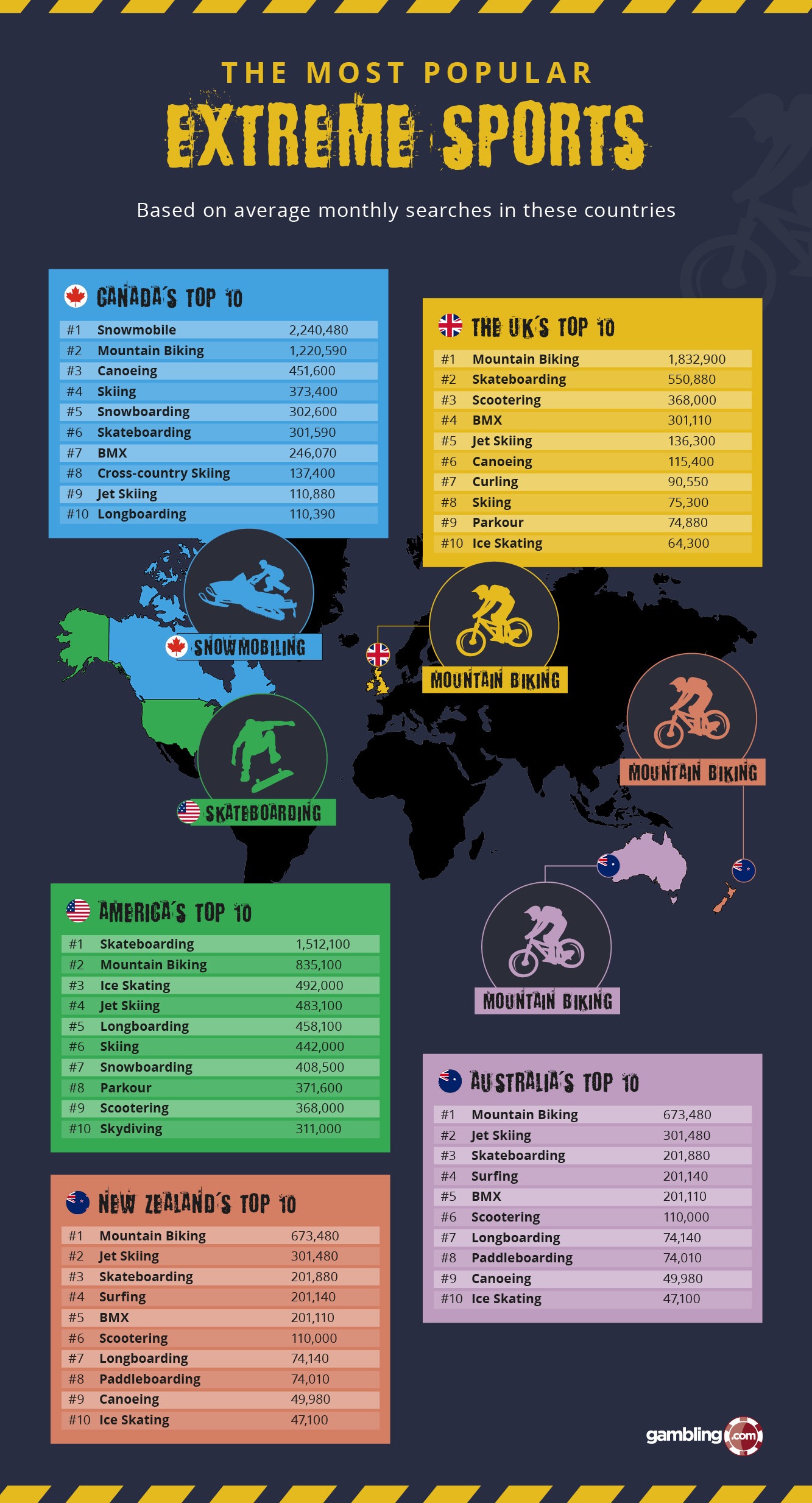 Extreme sports are enormously popular all over the globe, with millions of people searching for them every month. This study looked at which sports give different countries their biggest adrenaline rushes, with some proving just as thrilling no matter where you live.

The States Love To Skate

Skateboarding is the most popular extreme sport in the USA, with 1.5 million monthly searches seeing people go crazy for kickflips, wallrides, and ollies. Home to the world-famous Tony Hawk, the USA leads the way for skateboarding superfans, with the sport being just as accessible for kids in parks as it is for daredevils on halfpipes.

Mountain biking is the second most popular extreme sport in the States. The off-road activity attracts over 835,000 monthly searches, appealing to people who fancy a quick cycle around a field as well as those who crave downhill pursuits across incredible terrains.

In third place is a sport that’s much less accessible without the right arena. Ice skating covers everything from intricate dancing through to high octane sprinting, and it’s searched for 492,000 times a month. Anyone who watched the film ‘I, Tonya’ will know just how extreme the sport can be.

In the United Kingdom, mountain biking comes out first in popular extreme sports. Cyclists there have plenty of greenery and countryside to explore, something that surely helps attract the 1.8 million monthly searches.

Skateboarding, which is now a Summer Olympics sport, comes in second with 550,000 monthly searches, proving less than half as popular as its two-wheeled rival.

Scootering completes the top three with 368,000 searches per month. What was once a children’s hobby is now a highly competitive sport, with athletes performing death-defying twists and turns at heights two wheels rarely travel.

Australians love a bit of jet skiing, searching for it 301,000 times a month, while in New Zealand it’s surfing that gets people going. Adrenaline junkies search for it 8,130 times a month, taking to the huge waves that surround their stunning coast. 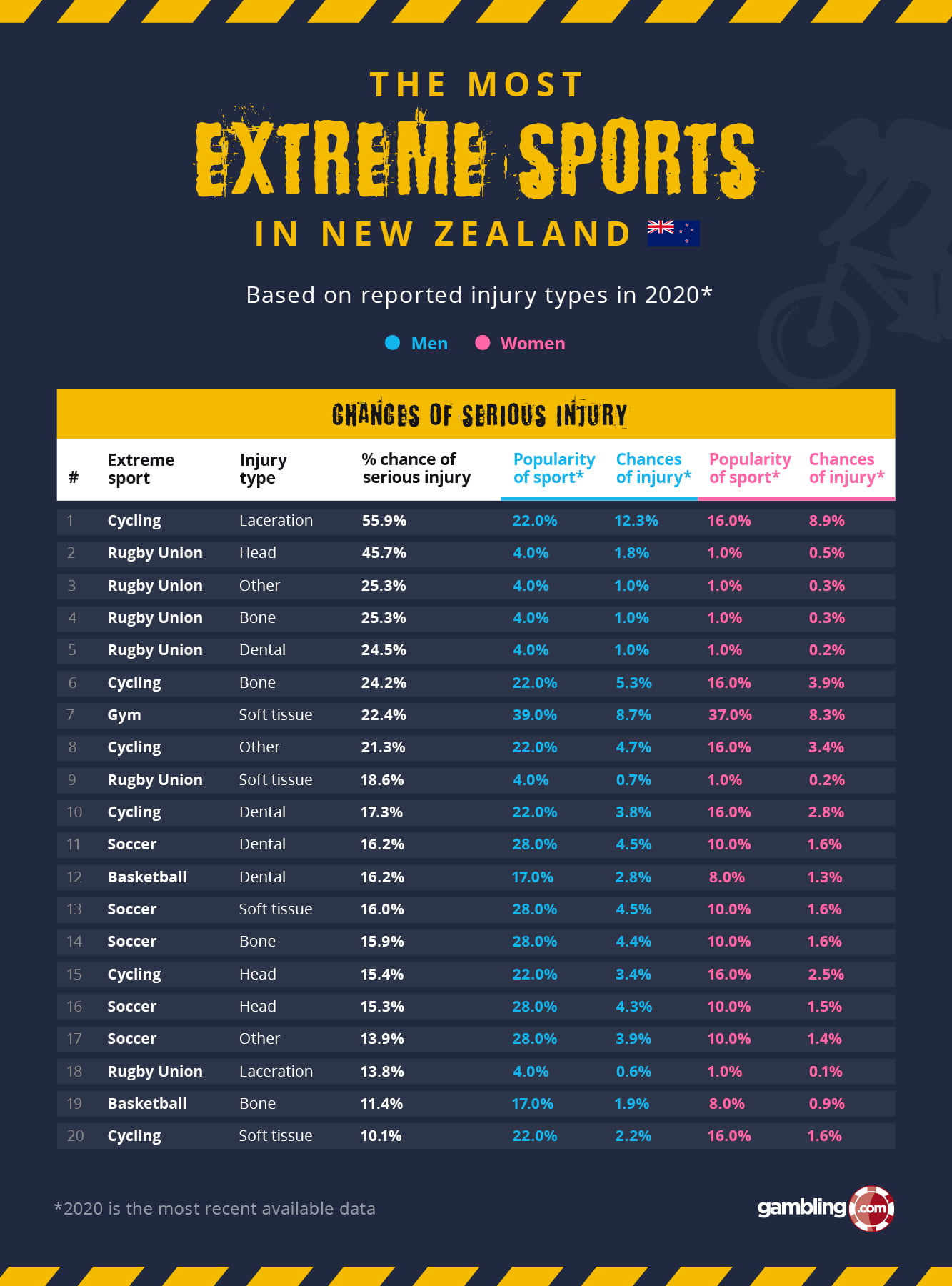 For many people, cycling is just a way of getting from A to B. But it might be a more extreme way than you think. In New Zealand, more people get injured on a bike than during any other activity, with things like cuts, punctured organs, and even stings all being common calamities. Based on the country’s extensive injury data, we can see that men run a 12.3% risk of getting injured while cycling, with women not far behind at 8.9%. 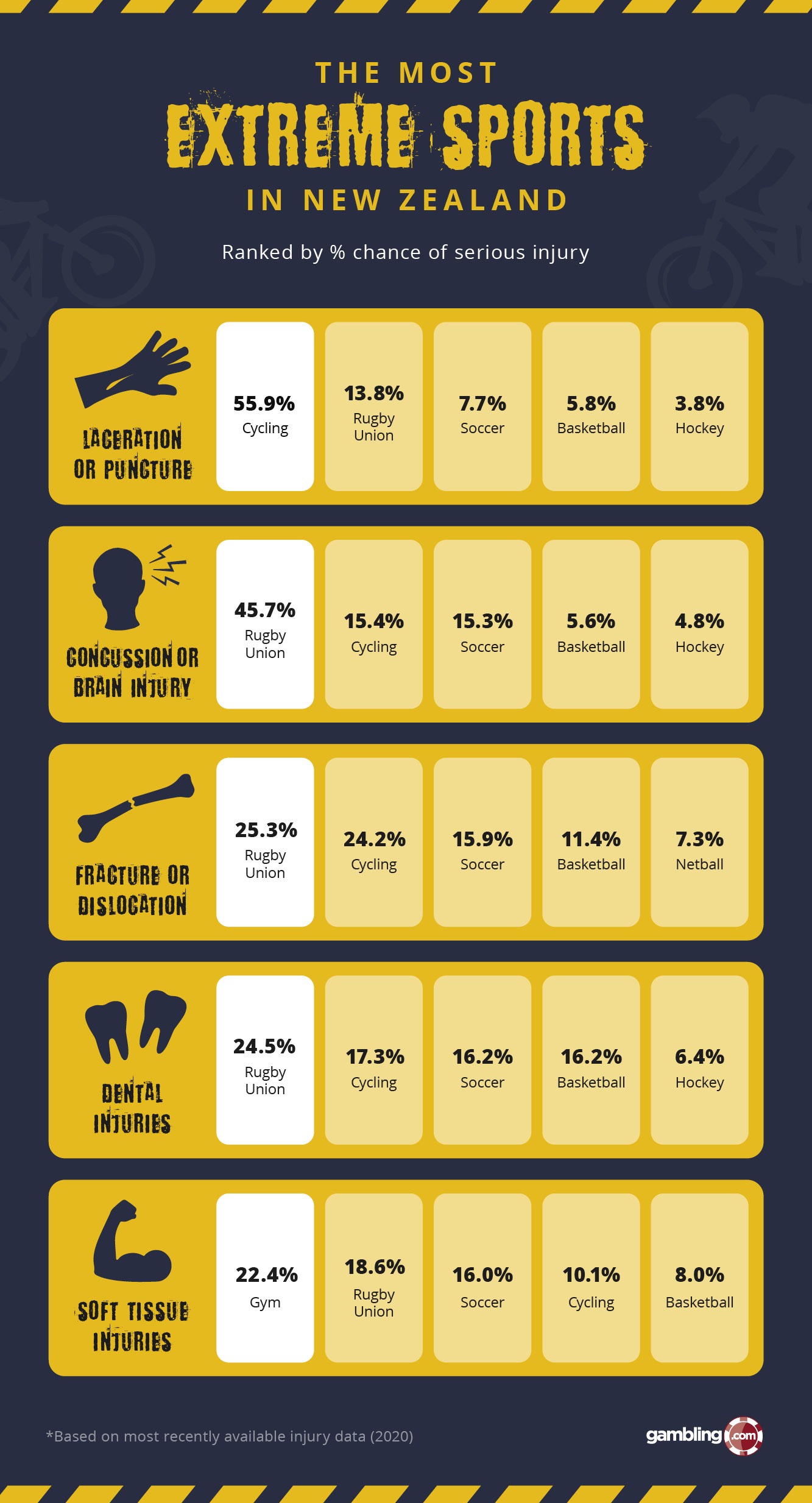 55.9% of all cycling injuries reported involve lacerations, punctured organs, or stings - presumably from the things they’ve crashed into!

The second most likely sports injury to be reported is concussion caused in rugby union. The high-impact sport is well known for its bone-crunching tackles, and 45.7% of all its recorded injuries are those involving damage to the brain.

In fact, rugby union accounts for four out of the top five most reported injuries in New Zealand. Fractures, broken bones, dislocations, and missing teeth are just some of the risks involved with the sport.

But it’s not just the extreme sports leading to extreme injuries in the country. Soft tissue injuries caused by jogging are the cause of 7% of reported injuries, while 3.1% of injuries are fractures caused in the gym. Ouch. 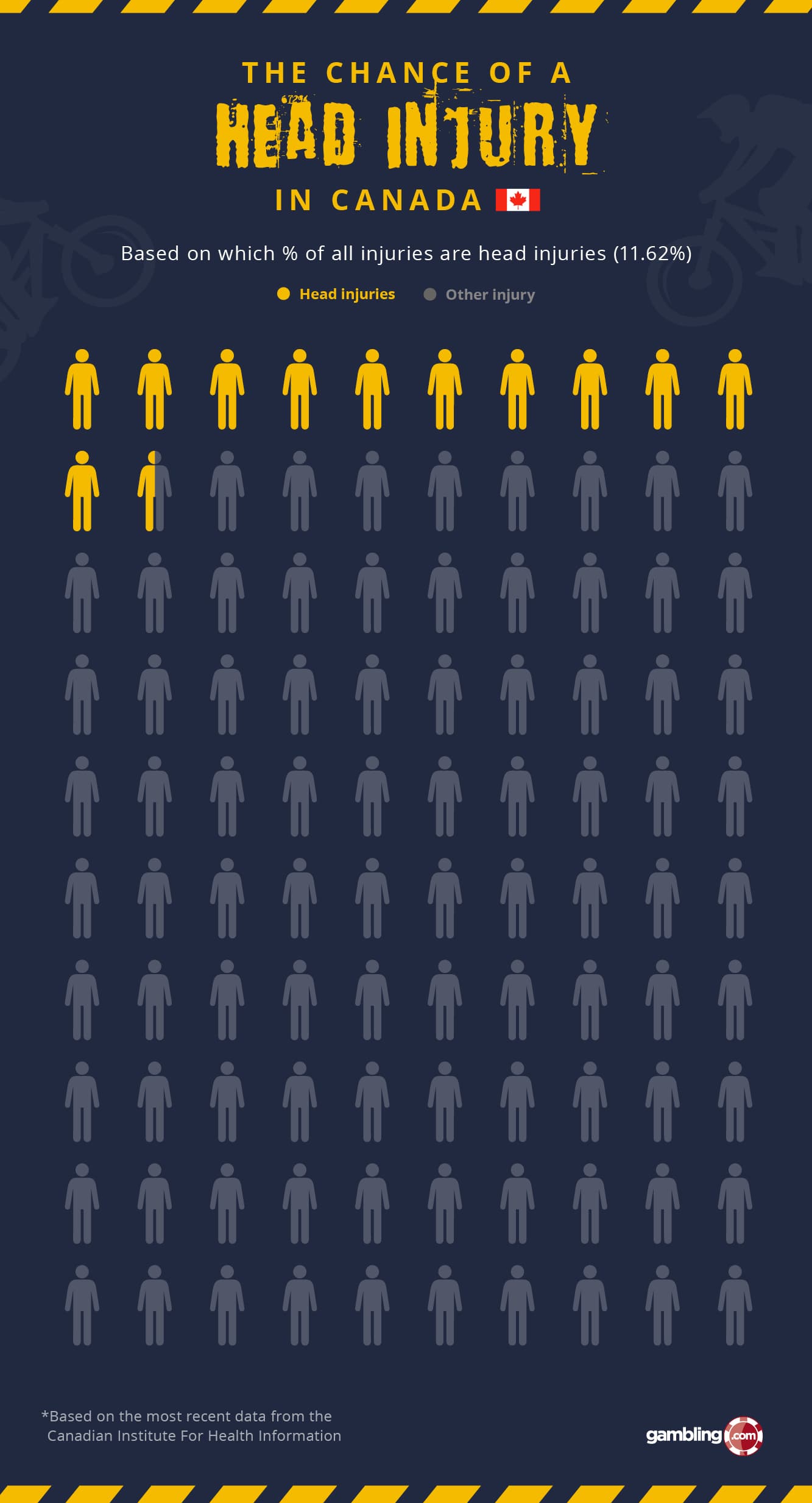 Head injuries can be one of the most serious consequences of extreme sports, potentially leading to fractured skulls, concussions, or even minor strokes. In Canada, out of the 1,682 head injuries reported last year, 74% were males.

The majority of those injuries were sustained during cycling accidents, with 548 incidents leading to head damage.

However, of all biking injuries, the head only makes up 13.98%. It’s a different sort of vehicle that leads to a higher risk of headaches than anything else in Canada, with the crown going to all-terrain vehicles with 14.25%.

All-terrain vehicles, or quad bikes as they’re more often known, are designed to travel at high speeds across all kinds of land, but that doesn’t come without challenges. Going over large rocks or hitting surprise bumps can easily throw even the most experienced rider from their vehicle, leading to plenty of all-terrain pain.

While women suffer much fewer head injuries than men, when it comes to horse riding they’re almost twice as likely. 36% of male horse-riding injuries affect the head, compared to 64% for women.

There’s a long way to fall from the back of a horse, running the risk of injuries to both rider and the animal unless you’re careful.

Rugby is New Zealand’s biggest cause of head injuries 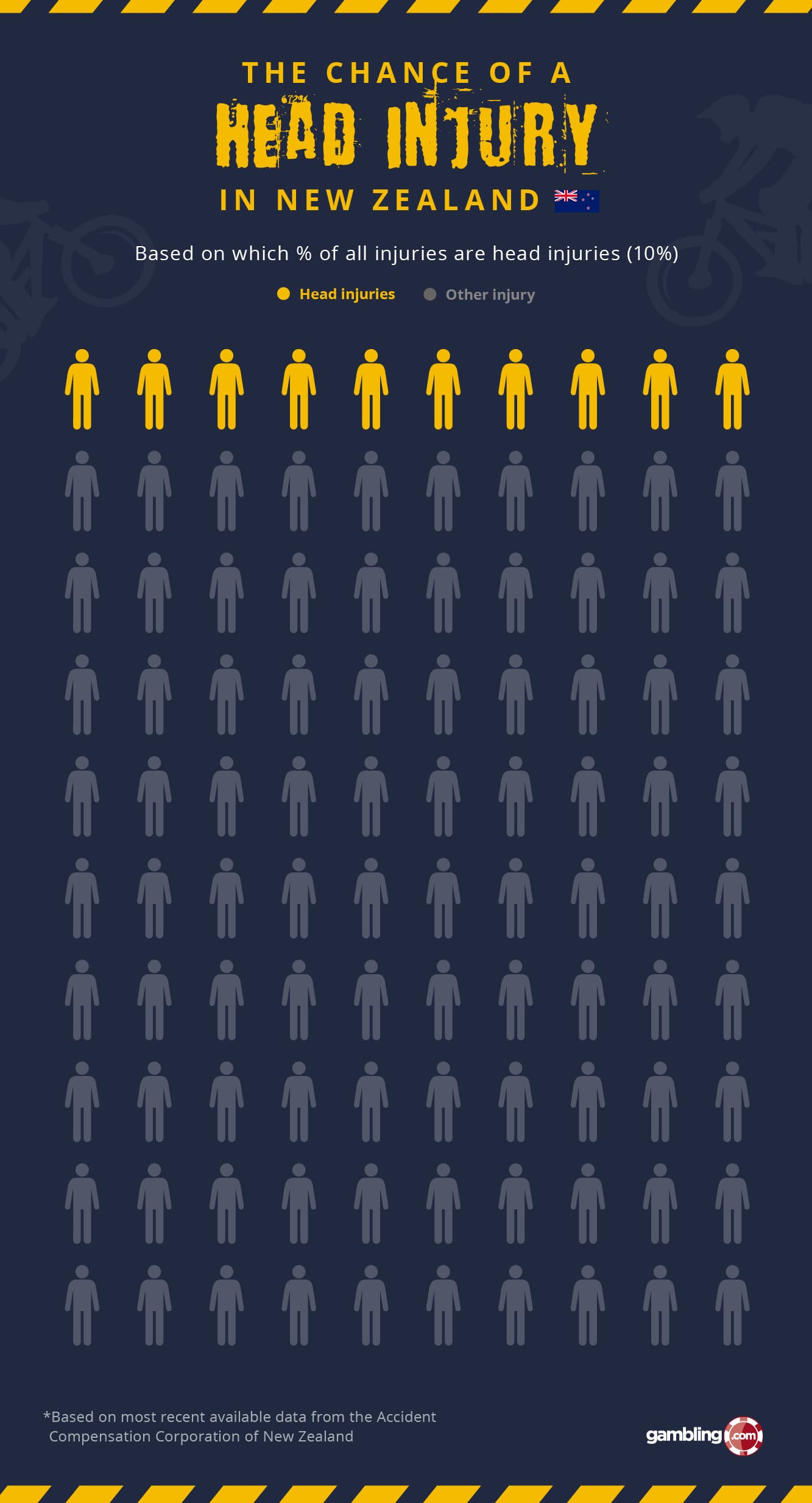 In New Zealand, it’s rugby union that leads to more head injuries than any other sport. 45.7% of all injuries reported from the sport involve the head, beating off painful competition from cycling (15.4%), soccer (15.3%), and basketball (5.6%).

New Zealand is one of the most successful rugby-playing nations in the world and is home to stars such as Dan Carter, Sam Whitelock, and the late, great Jonah Lomu.

Head injuries might be a risk, but that doesn’t stop the fans from loving it.

Unless you’re well trained, it’s always safer to stick to sports that don’t involve doing huge flips in the sky or riding on wild animals.

The odds calculations are based on the percent change of the injury in a specified sport, as well as the popularity of the sport among men and women.