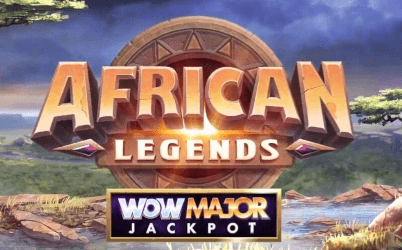 Take a virtual safari with the African Legends slot from Microgaming and their partner, Slingshot Studios. It’s a 5-reel game with a 243 ways to win mechanism that you can play on PCs and mobiles at the top casino sites. Stylised images of African wildlife and a tribal mask appear, and it comes with features such as stacked wild symbols, cascading reels, win multipliers, and progressive jackpots. African Legends is a medium volatility game with an average payback percentage of 94.92%. You can win 1200x your stake, or even more with the progressive prize.

Microgaming and Slingshot Studios have crafted a game with a distinctive style, and it looks great on PCs, iOS, Android, or Windows mobiles with the best mobile casinos. The high-paying rhino, elephant, warthog, and lion symbols join 4 lower-value playing card suits on the stone-effect reels, and it’s all set against a backdrop of trees and mountains in the heart of Africa. Tribal drums play out as the reels spin, adding to the overall theme of this impressive game.

The features are equally impressive, with a wild symbol which can fill the whole of the middle reel to help complete combinations, plus a Wild Blast bonus which turns up to 5 random spots wild. Winning symbols vanish and in Microgaming’s popular Rolling Reels feature, you could see several wins in a row, with a rising multiplier applied to each.

Free spins begin once you get enough Rolls in a sequence, and a WowPot progressive jackpot prize awaits those who land 8 wins in a row.

How to Play the African Legends Slot Machine

The potential bet range runs from just 0.25 per spin to a relatively low maximum of 25.00. It’s design to attract inexperienced players and those who have played slots for years, so it’s simple to set up, but offers flexible control options. You click Plus and Minus buttons to set your stakes, with other buttons activating the Autoplay and Turbo features.

Land 3 or more matching symbols on adjacent reels from the left to win a prize at one of our top-ranked online casinos. You have 243 different ways to achieve this, and there’s a paytable which lists how much you win from each. It also has further details on the exciting bonuses, such as Rolling Reels, multipliers, free games, and jackpots.

The Rolling Reels combine with a multiplier trail to potentially create win after win. Any symbols that are part of a win will vanish from the reels, and new ones drop from above to fill the empty spaces. If this creates new winning combinations, this Rolling Reels feature, (often called Cascading, or Tumbling reels), carries on.

Each win a series of Rolls gets a boost from a rising multiplier, and by the 7th, the maximum of multiplier of 10x is reached. On top of this, Rolling Reels lead to a free spins bonus round which starts once you land a non-winning spin. 12, 15, 18, or 20 free spins play out after you land a series of 4, 5, 6, or 7 Rolls.

Land an 8th Roll and you win the WowPot progressive jackpot prize, which seeds at 50,000.00 and rises from there as a percentage of all bets gets added to the prize pot.

The African Legends slots game has one more feature, and that’s the Wild Blast bonus. It’s a quick in-game bonus where up to 5 extra wilds are added to random places on the reels.

African Legends is a medium volatility game where you can find a nice balance between the frequency of winning spins and related prize values. It comes with average returns of 94.92% and it’s possible to win 1,200x your stake, or 30,000.00 in a single spin. The WowPot jackpot prize can reach a far higher level.

This is an attractive game with some exciting features, although it lets itself down a little with the low maximum stakes, and relatively small 1,200x highest win multiplier. However, apart from these, it’s a highly recommended slot where the Rolling Reels and multiplier trail can bring in several prizes from a single paid game.

Getting to an 8th Roll in a continuous series isn’t easy, but if you are lucky enough to manage it, there’s an instant progressive jackpot prize. If you like wildlife-themed games, then be sure to play the African legends slot at the best online casinos, and collect the best welcome bonuses when you join the sites featured here.