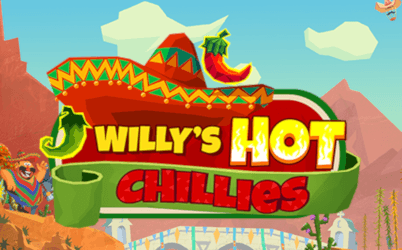 The Willy’s Hot Chillies online slot from NetEnt is the latest entry from the company that brought customers favourites such as Starburst, Fairytale Legends: Red Rising Hood and Jumanji.

Willy’s Hot Chillies will be another real money slots option for NetEnt, a company offering a catalog featuring dozens of slot games.

A game with a theme of turning up the heat would be nothing new for NetEnt. In addition to Willy’s Hot Chillies, other upcoming titles from the company include Gordon Ramsay: Hell’s Kitchen and Super Striker, which features a flaming soccer ball on its logo.

Those two games demonstrate the breadth of themes offered by NetEnt. Ramsay will be a 5-reel game named after the famed television personality and renowned chef who is used to turning up the heat in the kitchen. Super Striker will take its cues from a retro slot, complete with a 3x3 board format.

Players at top UK online slots sites will be happy to know that the Willy’s Hot Chillies online slot will be available in a mobile version for Android and iOS users. Like the desktop version of their games, NetEnt tends to provide lots of features in an easy-to-use format for its mobile online slot game enthusiasts.

Will this slot feature 3D graphics, progressive jackpots and big multipliers? Or will it lean more toward Wilds, Scatters and Random Jackpots? From all of those features to expanding reels and ways to get bonus games, NetEnt games have something for everybody.

We at Gambling.com will have all the details about the RTP, variance and maximum bet for the Willy’s Hot Chillies online slot from NetEnt when the game is released.

NetEnt aims its games at a variety of users based on the amount they like to bet. Whether it is a low-variance game such as Blood Suckers, a medium-volatility game – Joker Pro, for example – or a high-variance game appealing to high rollers such as Ghost Pirates, NetEnt has you covered.

It’s hard to say how popular the Willy’s Hot Chillies online slot will be compared to its predecessors.

But if it resonates with players anything like Starburst, one of the most enduring games in the industry, it will be quite an achievement. Not content to sit on its laurels, NetEnt has also given customers games with fantastic graphics such as Universal Monsters: The Phantom's Curse, which offers visual flash and panache to go along with a 96.5% RTP and great free spins possibilities.

The Willy’s Hot Chillies online slot will be released July 30, 2020 by NetEnt.