The Michigan State Spartans battle the Texas Tech Red Raiders in one of two Final Four games this weekend.

There are many different oddsmakers with various different lines to consider for fans of March Madness betting.

Which ones stand out?

The Spartans are the current favorite for this game, entering with a -160 moneyline if you choose to bet with PointsBet.

That's not a bad bet to consider, especially since Texas Tech is appearing in their very first Final Four game in school history.

The low moneyline also indicates that taking Michigan State to win straight up won't cost you a ton either.

The line can always shift, however. If a lot of bettors start taking the Spartans to win with the low moneyline they currently have, it could continue to increase by the time Saturday gets here.

If you are sold on the Spartans, now is the time to take Izzo's team.

Conversely, Texas Tech is at +135 and enters this game with the No. 1 defensive rating in the country. It could be a little bit cheaper to take Texas Tech's moneyline if you are uncertain on Michigan State or sold on Chris Beard's group.

You can bet these Final Four odds here:

Betting the Over or Under

The current over/under is set at anywhere between 127 and 135, depending which oddsmaker and alternate line you use. Be wary of the point total in this game, as both team's point total pattern throughout the season makes this wager a bit more difficult to predict.

The Red Raiders have only given up an average of 57 points per game during their March Madness run, as their last game against Gonzaga was the most points they've allowed so far (69).

Before Gonzaga, Texas Tech didn't let a tournament opponent score more than 58 points in a game which included a top offense in Buffalo.

What makes the Red Raiders' a bit of a concern when discussing limiting Michigan State's point total are their games before March Madness.

Texas Tech gave up over 70 points to both Iowa State and West Virginia before the tournament began, even allowing 80 points to Oklahoma State at the end of February.

Michigan State has never scored less than 60 points in a game this season, and they just scored 68 points against the eighth-best defensive rated team in the nation.

The Spartans also haven't seen Texas Tech this season as Oklahoma State, Iowa State and West Virginia all had.

The Spartans are no guarantee to hit 60, as Texas Tech has proven each tournament round that their defense is without a doubt the best in the nation.

The fact that they held Gonzaga, a team with the number one offensive rating in the country, to under 70 points is alarming for a point total bet.

The 132 SugarHouse is offering at -110 seems like a safe place to start for an over/under, but the consistency Michigan State has shown to score points this season makes this category a bit concerning despite how good Texas Tech's defense is. 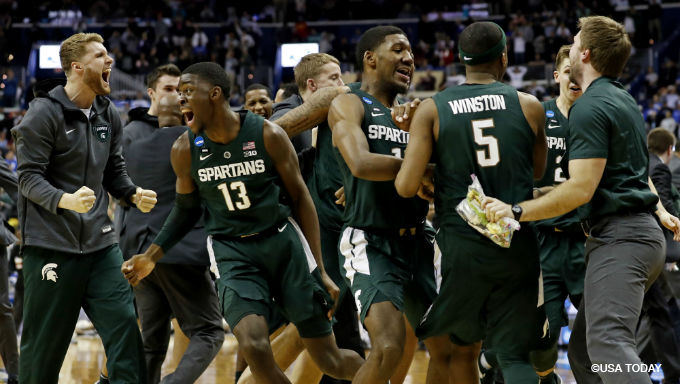 The Spartans are currently favored to win by -2.5 at (-112) if you wish to bet with BetAmerica. That bet, although cheap for those swaying towards Sparty, is a bit specific as there are other marginal bets to consider.

Despite how you feel about Texas Tech's defense, either of those two above could pan out.

Texas Tech suffocating Michigan State's offense is possible, as the Red Raiders did to Buffalo. It's also very possible Michigan State pulls away from Texas Tech due to experience and leadership.

Playing the odds though, it seems most likely this game will be closely contested. The odds of this game being anywhere between 1-10 points seems greater than picking a point total or straight up winner.

Check out: PointsBet For Free Bets and Welcome Bonus.

If you want to make a simple and cheap bet without much conviction, consider the overtime bet. Overtime bets always favor 'NO' heavily, but this game has a formula for possible overtime implications.

Most oddsmakers have overtime occurring +900 or more, including if you go bet with 888Sport, which is a great value bet if you have a few bucks to toss.

There have only been four overtime games in the tournament thus far, but two of the four occurred in the Elite Eight.