Grab a seat, Tom Brady. You get to watch Super Bowl 54 at home like the rest of us.

The 100th NFL season brought a pair of long-dormant powerhouses back into the mix with the Kansas City Chiefs and San Francisco 49ers set to play for the Vince Lombardi Trophy Feb. 2 at Hard Rock Stadium in Miami Gardens, Fla.

The betting line opened at a consensus Chiefs -1.5 at top NFL sportsbooks and dropped to Chiefs -1 a few days later. The total is holding strong at 54 and figures to get plenty of attention on the over with these two electric offenses. It’s a complete contrast of styles, with star quarterback Patrick Mahomes leading the Chiefs’ aerial attack and a host of 49ers running backs sharing the work in San Francisco’s potent rushing game.

Roughly 400 prop bets on the table means bettors can get Journey-style action on Super Bowl 54 – any way you want it.

Let’s take a look at how Super Bowl betting enthusiasts should be playing this one across the board, from spread and total to several prop bets ahead of the big game in Miami. 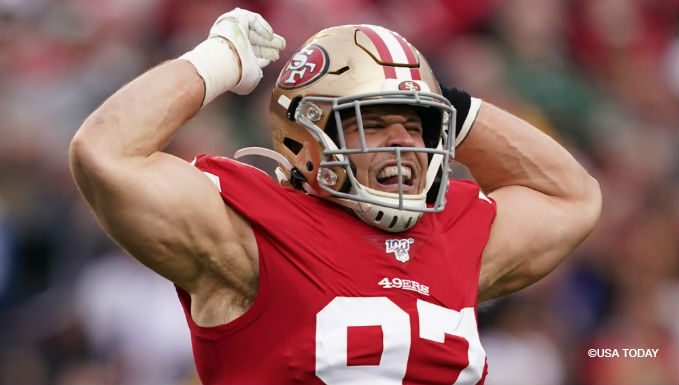 Kansas City is holding on as a slight favorite on the moneyline, which figures to be a popular play on either side considering the small point spread. The Chiefs are -120 on the moneyline at William Hill, while the 49ers are +100.

San Francisco won a league-best 13 games during the regular season at 13-3. The Chiefs were one behind at 12-4 and enter Super Bowl 54 on an eight-game win streak dating back to a Nov. 10 upset loss at Tennessee. The 49ers lost two of their last five regular-season games but have now won four straight after the NFC Championship victory. 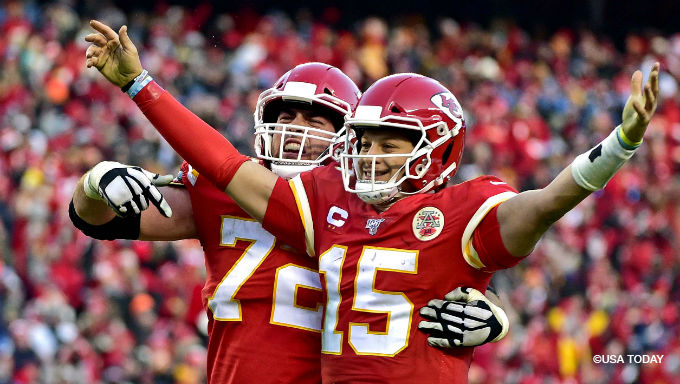 Both teams have covered at an elite level all season long, including in last in week’s conference championship matchups. The Chiefs were 7.5-point favorite over the trending Tennessee Titans and rewarded bettors with a 35-24 win after falling behind for the second consecutive week. The 49ers were even more dominant in a 37-20 win over the Green Bay Packers that was more lopsided than the score suggests.

Kansas City is tops in the NFL with a 12-5-1 record against the spread and made Chiefs bettors a ton of money over the last two months. The Chiefs have covered or pushed eight consecutive games dating back to a Nov. 10 upset loss to the Titans. They even covered a 10-point spread with ease after falling behind 24-0 in their 51-31 Divisional Round win over the Houston Texans.

San Francisco tied for the NFL’s third-best ATS record, covering 64.7% of its games at 11-6-1. The 49ers have covered three straight games and six of their last eight matchups. That includes easy covers in both playoff games after linebacker Dre Greenlaw’s last-second stop in a 26-21 win to end the regular season.

The 49ers are also a perfect 5-0 against the spread as underdogs, most recently beating New Orleans outright as a 1-point underdog on Dec. 1. Kansas City was favored in all but one game and upset the Vikings, 26-23, as a 5.5-point underdog with Mahomes out due to injury. 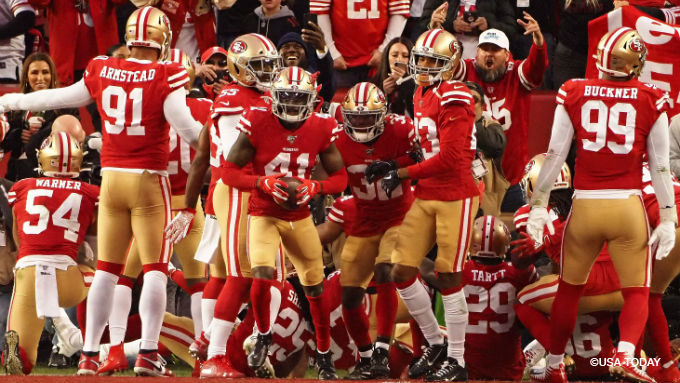 The over is always a popular Super Bowl play and figures to be bet heavily at both top New Jersey sportsbooks as well as the top sports betting sites in Pennsylvania. Don’t expect that to change after the over hit in both the NFC and AFC conference championship games. What’s great about these teams is they’re nearly identical in total offense – the 49ers averaged 381.1 yards per game this season and the Chiefs 379.2 – while going about it in completely different ways.

San Francisco is first in rushing average (235.5 yards per game) and last in passing (95.5) among postseason teams. Kansas City is second in passing (304) and seventh in rushing (115).

Mahomes left a huge impression in bettors’ minds as the Chiefs racked up 86 points in two playoff games, turning on the jets and seemingly scoring at will after early two-score deficits. The 49ers are doing something entirely different with a versatile rushing attack, highlighted by Raheem Mostert’s 220-yard, four-touchdown day in the NFC Championship.

San Francisco’s defense could also provide some value on the under. The 49ers ranked second in total defense this season, giving up just 281.8 yards per game behind the best pass defense in the league. The Chiefs were average on that side of the ball, allowing 349.6 yards per game while counting on Mahomes to keep them in every game.

The over is 10-8 in Kansas City games this season and 9-8-1 in 49ers games. The total has also gone over in three straight Chiefs games, while the 49ers have seen the under hit in two of the last three. 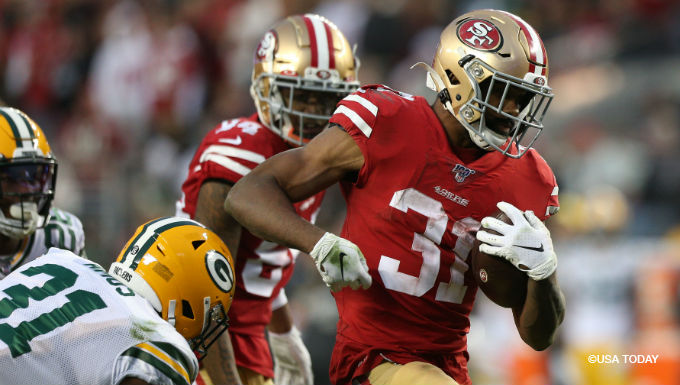 There are a ton of prop bets out there, but few are as popular as the Super Bowl MVP betting odds. Quarterbacks are usually the favorite on either side with good reason – Seven of the last 10 MVP honors have gone to the winning quarterback. But there’s often value to be found further down the board. Look at New England Patriots wide receiver Julian Edelman, who earned Super Bowl 53 MVP with 10 catches for 141 yards.

Raheem Mostert (above) is listed at +900 after his four-touchdown NFC Championship showing and star defensive end Nick Bosa is +2500, which could pay off big time should Bosa make a few game-changing plays.

Here’s a look at this year’s top Super Bowl MVP candidates at DraftKings.

All odds current as of publication and subject to change.

Enter your state below and see the top sportsbooks and bonus offers available to you for your Super Bowl bets and all your NFL betting needs.