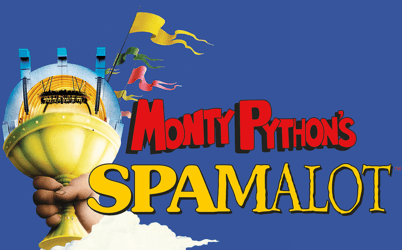 Gags and giveaways abound in this anarchic slot, Monty Python's Spamalot, which cheekily (although rather accurately) bills itself as 'not an ordinary jackpot game'.

Gags and giveaways abound in this anarchic slot, Monty Python's Spamalot, which cheekily (although rather accurately) bills itself as 'not an ordinary jackpot game'. One thing that keeps in common with your standard jackpot slot, of course, is the progressive jackpot that is offered. At the time of writing, the Holy Grail Jackpot stood at a staggering £1,701,761 and counting; and even the Slightly Less Holy Grail Jackpot was over £200. In fact, even the standard jackpot, achieved by lining up five Wild symbols, still delivers an above-average prize of 5,000 coins. Yes, Spamalot may be silly, but the money remains serious.

This 5 reel slot boasts 20 adjustable paylines using coin sizes from 0.01 to 1.00 pounds. Waste no time by using the handy Max Bet button or let the slot do all the work for you by enabling the Auto Spins feature. Symbols include traditional card symbols like A, 10, J, Q and K, alongside funny animations of the characters, such as Sir Galahad, Sir Lancelot and Lady Of The Lake. All there to help you land those big wins.

To boost your winnings even further, Monty Python’s Spamalot online slot also offers a wealth of exciting bonuses and extras. The super silly bonus feature for example can be rather rewarding. The bonus game is launched by landing the Bonus symbol on reels one and five simultaneously, but that's where the simplicity ends. Built like a theatre play in four acts, the game runs through four different sub-games (stay with us).

The first is the Storm the Castle Bonus, in which you choose one of six strategic spots to fire a cow at the castle in a bid to win a cash prize. The second is the None Shall Pass Bonus, in which you must strike the knight to increase your multiplier and boost your final prize. The third is the Knights Who Say Ni Bonus. Collect a shrubbery, and bring it to the knights to reveal a prize. Finally, you reach the Killer Rabbit Bonus, in which you're given grenades to throw at rocks in a bid to save the knights and their accompanying cash prizes. It's insanely silly, ridiculously fun and offers loads of chances to win big.

Thankfully, however, the second bonus is much more straightforward than the first one. Landing three Monty Python Scatter symbols begins the Free Games, in which you're given 10 free spins with random Wilds. These spins cannot be re-triggered.

Also, keep an eye out for the all-important Holy Grail Jackpot Game. Collect five Jackpot Game symbols during the Free Games for a chance to play for the ultimate prize. The game starts by choosing one out of seven hens on the bottom of a hill. If the chosen animal reveals a cash prize, then players move onto to the next level. This continues till the sixth and last level, where you will either win the Holy Grail Jackpot or the Slightly Less Holy Grail jackpot.