It’s hard to imagine American football without its iconic mascots. Whether it’s the Kansas City Chiefs’ K.C. Wolf or Steely McBeam from the Pittsburgh Steelers, mascots have played a pivotal role cheering their teams onto victory in the world of football over the years. But could the role of our iconic sporting mascots be more important than we think when it comes to predicting winning teams?

Are mascots luckier than we think?

The role of a mascot goes way beyond simply entertaining the crowds. They’re a symbol of good luck for the teams that they represent. And according to our latest research, some mascots are way luckier than others. We gathered data from every winning high school and college football league across the USA to find out which mascots appeared the most at the top of the tables. With data on over 16,000 mascots, this allowed us to work out how many times each type of mascot had won a league and find those with the highest chances of winning.

Conquistadors are the luckiest mascot

Great news for anyone who is cheering on a football team with a conquistador as their mascot. Five teams with conquistadors as mascots bagged themselves five league victories over a period of two years. With just 13 of the mascots on our college football fields, this represents a 19.23% chance of winning.

The conquistadors might not be the most popular mascots you see on the sidelines, but our data showed they’re the luckiest. The conquistadors were the remnants of the standing army of 16th century Spain and got their name from being both conquerors and explorers, leaving Spain to travel to America during the Age of Exploration. The fighting power of the stags makes them the second luckiest football mascot, but if you’re backing any team with explorers as their mascot, your quest for victory doesn’t trail far behind in the odds. But which mascots are actually bringing their teams bad luck as opposed to good luck?

Rams may not be as lucky as you think…

In the Chinese calendar, rams are considered to be a symbol of good luck, but our data proved otherwise. With more than 340 ram mascots across high school football teams and just one of those teams winning a league, we found the ram is the unluckiest mascot of them all. Raiders don’t seem to have the tactics to make it to the top of the tables either, with just two teams with raider mascots winning a league in 2018 and 2019. And they may be wise, but the owls have proved that wisdom isn’t a trait that can land you victory in American football. If you’re wondering how our more ‘traditional’ mascots fared in the leagues, let’s take a look. 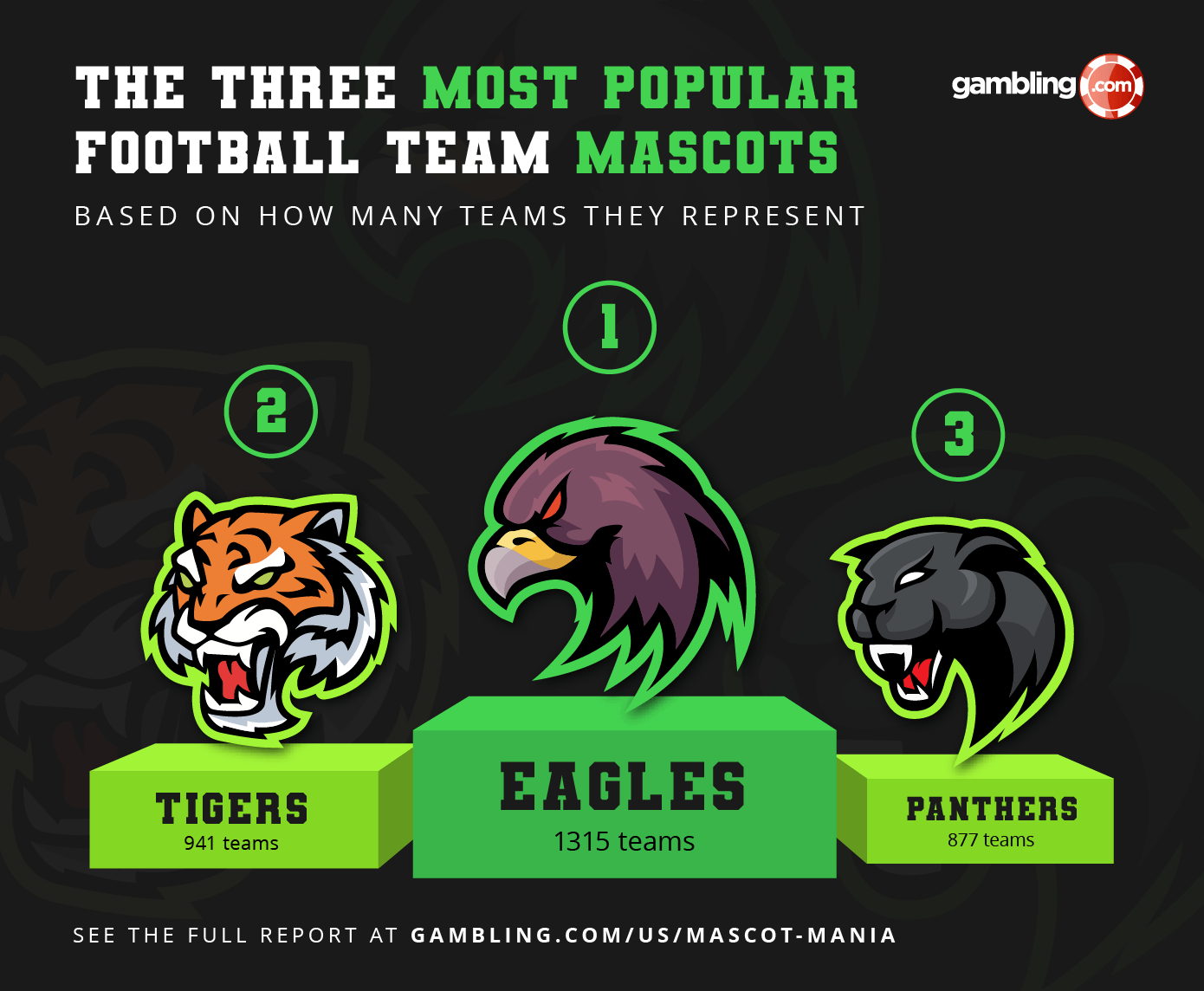 Why is the American Eagle so popular?

A national emblem and also the USA’s most popular American football mascot, the eagle soared right to the top of our charts when we analyzed the popularity of mascots, with more than 1,300 Eagles being used as mascots across the States. A symbol of national pride, strength and freedom, the eagle didn’t fare too badly in terms of its luck too, representing a 2.3% chance of league victory compared against over 100 other mascot types.

The strength, agility and aggression of tigers and panthers makes them a natural fit as mascots for American Football teams, ranked 2nd and 3rd respectively in terms of popularity. Tigers represent nearly 941 teams in the States, while the Panther packs count for 877. We found that high school teams with tigers as their mascots had a 1.38% chance of finishing at the top of their league, while panthers had an 1.82% shot. While those figures may seem small, it’s worth remembering that tigers and panthers are up against over 100 other mascots, so these are decent odds to sink your teeth into.

Does the NFL have Lucky Mascots Too?

Based on the last five seasons of home games, we were also able to determine the most and least lucky professional football team mascots. The New England Patriots have won nearly 80% of their home games in the last five years, indicating Pat Patriot helps usher the New England team to victory at Gillette Stadium. On the opposite end of the spectrum, the New York Jets are the least likely team to win at home, showing that the Jets' mascot isn't a lucky icon. Take a look below at the most and least lucky NFL team mascots.

Using data from Calpreps.com, we analyzed the winning teams and their mascots for every high school football league across America over a two-year period from 2018–2019. The total number of mascots that have appeared in games was gathered using data from Maseyratings.com To work out the % chance of winning, we multiplied the number of mascots by two (to account for the two-year period of league victories from the Calpreps data), and divided the number of winning teams by this figure to determine their chances of victory. Several mascots were discounted due to missing data or because their representation in High School football games was less than five mascots.