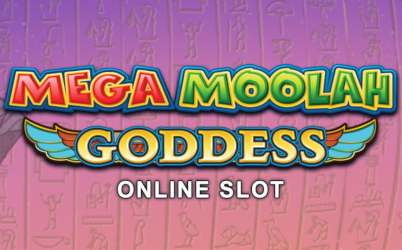 What do you get when you combine the most popular slot machine topic of all with one of the biggest jackpots in the world? The answer is the Mega Moolah Goddess online slot, where an ancient Egyptian queen can lead you to a progressive prize worth millions.

The Mega Moolah series has become a massive success for Microgaming and players have won progressive jackpots of 15,000,000.00 or more. The Mega Moolah Goddess slot adds in exciting features such as wild substitutions, free games with wins multiplied by 6x, and the option to gamble prizes.

It’s a desktop and mobile game with 5 reels, and 25 lines. There’s a high volatility, and an average return to players percentage of 93.3%.

How to Play the Mega Moolah Goddess Slots Game

The slightly retro graphics include playing card symbols, iris flowers, and a sarcophagus on the 5x3 symbol grid. A winged god, Eye of Ra and the beautiful Egyptian Goddess herself pay the highest prizes. Pyramids and palm trees are just visible behind the reels, along with a colorful bonus wheel that spins up the progressive jackpots when triggered.

You can play the Mega Moolah Goddess slot on PCs, Android, Windows, and iOS-powered mobiles at the top New Jersey online casinos or the best Pennsylvania online casinos. It’s nice and easy to setup, which helps to attract inexperienced players, as well as those of us who have played online slots for years.

Click the coins button on the controls and select a wager from a range of 0.25 to 25.00 per spin. Fast play and automatic spin modes are available, and before playing, it’s a good idea to read the paytable, which you reach by a click on 3 small lines.

This has details on the features, plus a breakdown of how much each symbol pays at your chosen wager when you match them across a payline from the left. The Goddess is worth the most, at 400x your wager when she’s seen right across a line.

The Goddess is a wild symbol who can substitute for others and complete extra winning combinations. A bird scatter symbol pays out when it lands in at least 3 places at once, and it also triggers a free spins bonus round.

You get 20 free spins from 3 scatter symbols, while 4 or 5 scatters award 25 or 30 extra games respectively. All wins are multiplied by 6x during this round, and it’s possible to grab a win of 60,000x your wager if the Goddess fills all 15 symbol positions.

The highlight, as with many of the Best Slot Games, is the progressive jackpot round. In common with other Mega Moolah slots, it’s awarded at random and plays out on a colorful wheel with 20 sections. Spin the wheel and you win either the Mini, Minor, Major, or Mega progressive prizes. These seed at 10.00, 100.00, 10,000.00, and 1,000,000.00, respectively and rise in value as a portion of all wagers placed on Mega Moolah slots gets put aside.

There’s an optional gamble round, where you double wins by correctly guessing the color of a face-down playing card, or quadruple them with the right suit. You can repeat the game several times, potentially turning a modest win into a big payout, but of course, you lose it all on a wrong guess.

Outside of the massive progressive jackpots, you can win up to 60,000x your wager, or 1.500,000.00 if you play with the maximum stake of 25.00 per spin. Mega Moolah Goddess is a high volatility slot machine with an average return to players percentage of 93.3%, (not counting the percentage put towards the jackpots.)

If you like the topic, (and it’s the most popular, so chances are you do), the Mega Moolah Goddess online slot is an excellent choice. The wild symbols and free games with all wins multiplied by 6x ensure that even without jackpots, it’s a high-quality game with exciting features. The average payback percentage is low, but that’s standard with progressive jackpot games.

For an ancient Egyptian-style slot, with rewarding features and a shot at a life-changing jackpot, play the Mega Moolah Goddess slot machine at the recommended New Jersey and Pennsylvania slots sites featured here.

Where can I win money playing the Mega Moolah Goddess slot?

You can win real cash prizes when you play the Mega Moolah Goddess slot machine at our recommended Microgaming-powered sites. It joins a vast selection of other games, and you can collect the biggest and best welcome bonus deals from these casinos.

How does the progressive jackpot feature of the Mega Moolah Goddess slot machine work?

With every wager made on the Mega Moolah Goddess slot, and others in the Mega Moolah jackpot series, a small percentage is put aside. This money goes into a virtual ‘pot’ and builds the Mini, Minor, Major, and Mega jackpot values, until someone collects the prize and they reset back to ‘seed’ levels.

Does the Mega Moolah Goddess slot have a free spins feature?

Yes, it does. The progressive jackpots are not the only bonus feature found in the Mega Moolah Goddess slot. Any 3, 4, or 5 bird scatter symbols landing in any places at once, will award 15, 20, or 25 free spins. During the bonus games, all wins are multiplied by 6x.

Can I play the Mega Moolah Goddess slot on a mobile?

The Mega Moolah Goddess slot machine works on desktops and mobiles without any changes to the looks, gameplay, or potential to claim a vast progressive prize. The controls shift to make them easier to reach on smaller mobile screens, but that’s the only difference.

How volatile is the Mega Moolah Goddess slots game?

The Mega Moolah Goddess slot is a high volatility game. Slots with this level of variance usually pay higher prizes, but less often than low volatility games. It’s an exciting format that many players prefer.

Are there other games in the same series as the Mega Moolah Goddess slot?

The Mega Moolah Goddess online slot is part of a wide range of games that share the same jackpots. The original Mega Moolah, with an African wildlife theme is still available, and fans of ancient Egyptian games can play the very similar Mega Moolah Isis slot machine.

How many paylines does the Mega Moolah Goddess slot have?

This is a 25 payline game. You have 25 different ways to land symbols across the game for a win, although you need 3 or more examples of the same symbol in an unbroken sequence from the left. The Goddess pays on only 2 reels, and she’s also a wild symbol that can act as others if needed.

Does the Mega Moolah Goddess slot have a wide wager range?

The wagering range of the Mega Moolah Goddess slots game is from 0.25 to 25.00 per spin, which is less than some higher rollers like to play with. It equals between 0.01 and 1.00 on each of the 25 paylines.

Why is the Mega Moolah Goddess slot so popular?

Slots themed around ancient Egypt are hugely popular, and when a game comes with the potential to win a multi-million jackpot after any spin, it becomes an even greater attraction. The Mega Moolah Goddess online slot is among the most successful games in the Microgaming range.

When was the Mega Moolah Goddess slot released?