The dollars and the data from two reports make it official: Folks like betting on sports, and the NFL is the game of choice.

A record $13 billion was wagered legally in the United States in 2019, nearly double the 2018 figure of $6.6 billion in handle, the American Gaming Association announced this week. States gleaned $118 million in tax revenue, according to the trade organization.

Since the overturn of the Professional and Amateur Sports Protection Act in 2018, bettors have wagered more than $17 billion nationwide, translating to $1.2 billion in sportsbook revenue, as well as $152 million in tax revenue to state and local governments.

Key takeaways from the Kambi report:

The report also provided evidence to support the anecdotal assumption that regional bias and fandom affect handle in states where sports betting is legal. In Iowa, which borders Missouri to the north, 55% of preseason championship bets were placed on eventual Super Bowl winner Kansas City; the Chiefs drew just 18% of handle elsewhere.

The Philadelphia Eagles accounted for 37% of future bets at Pennsylvania sportsbooks and 22% in bordering New Jersey. The Chicago Bears account for 62% at sportsbooks in Indiana, a state which shares a boundary with Illinois.

New Jersey and New York bettors did apply some savvy or healthy skepticism in eschewing the Giants and Jets, however. The Chiefs (11%) were the top pick in New York and second choice in New Jersey as the Eagles led New Jersey sportsbooks at 22%. 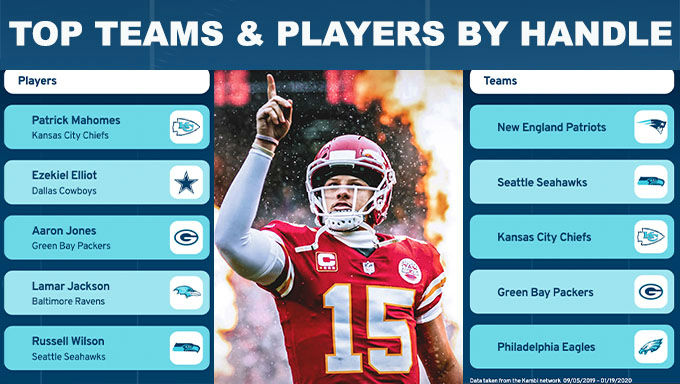 Details on the American bettor in Kambi report

The most popular domestic betting markets for the Kambi were football, basketball, baseball and tennis.

Globally, they were soccer, tennis, basketball and football.

The study also broke down betting behaviors regarding pre-match and in-game offerings.

For wagers placed before kickoff, spread, total points, moneyline and points parlay were the most popular. In-game, they were moneyline, spread and points, result of drive — which Kambi noted drove 8% of live handle, and next scoring play. About 80% of in-game bets were placed at a kiosk, according to the report. That runs counter to the industry trend of greater use of mobile in wagering.