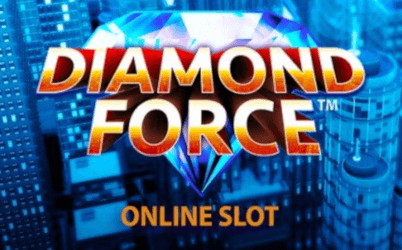 Fans of superhero-themed slot games are sure to be excited about Diamond Force by Microgaming. This high volatility slot game comes with a 96.53% RTP, the kind of gameplay we've come to expect from Microgaming's online slots and some unique bonus features. To find out more, keep reading for our Diamond Force online slot review or check it out yourself at one of our recommended online slots sites.

Play Diamond Force For Free!
Bookmark It For Later 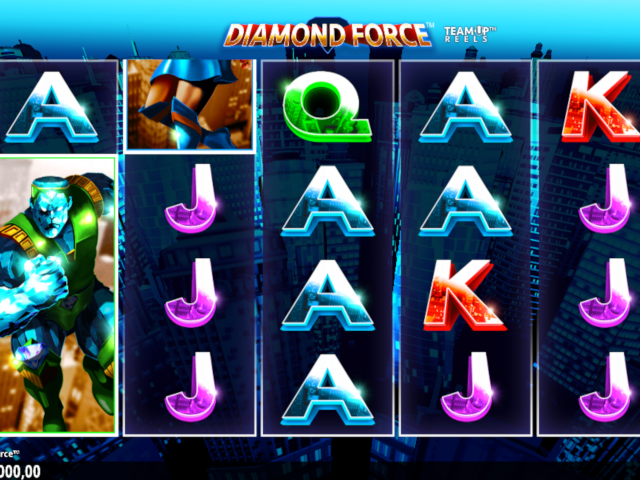 Microgaming seem to have found a winning formula with the Diamond Force online slot. They're know for delivering in the gameplay department, but have also incorporated the kind of soundtrack that would befit a team of superheroes. Add to that a host of gameplay features, such as Any Adjacent Pays, where having matching symbols on three consecutive reels triggers a payout, regardless of which reels they appear on.

The bonuses available in Diamond Force make it a very interesting game to play at any of the best online casinos. Team-Up Reels, stacked bonus symbols, wilds and bonus games mean there's potentially plenty of fun to be had on the 5x3 grid, with 1,024 ways to win.

Setting up Diamond Force really couldn't be much easier. Microgaming are known for creating user friendly slot games and this one is no different. Whether you choose to play on your desktop, Android or iOS device, you will have full control over how you play.

Once you load the game up, you will see five buttons in the bottom right of the screen. The top button, represented by three horizontal lines, opens the Settings and Paytable. There are two adjustable settings – you can turn sounds on or off and you have control over whether or not the slot's background moves. The Paytable gives you access to everything you need to know before spinning the reels. The various symbols are explained, from the low value symbols (J to A) to the high value ones (the four different colored superhero characters). The slot's unique bonus features are also explained here. We'll go into more detail on these later in our review.

The next button on the right hand side of the screen allows player to set their stake. Spins can be played from as little as $0.10 up to as much as $15.00 when played for real money at recommended online slots sites, which is quite low by modern online slots standards, meaning high rollers will likely want to look elsewhere.

Two arrows signify the game's Quickspin feature, which speeds up every spin of the reels. If you'd like to sit back and watch the action, click on the two circular arrows to set up Autoplay. Here, you can set your stake, number of spins (10-100), loss limit and win limit and let the Diamond Force heroes do their thing.

For those who want to manually play the game, the very bottom right button is the Spin button. When you've set your stake, hit that button and try to pick up some huge prizes by playing for real money.

Strap yourself in, because there's a lot to talk about when it comes to Diamond Force free spins and bonuses! The most common of these is the wild symbol. Much like in other slot games, this symbol can substitute for any symbol in the game apart from the bonus symbols, but it can only be found on reels 1 and 5.

The most striking feature in Diamond Force is the Team-Up Feature. To trigger this, players must land a combination of 3 or 4 full stack feature symbols – represented by the blue, green, red and purple superheroes. In this feature, a new gameboard is created, which consists of multipliers (2x, 3x and 5x) and credits. Landing the superheroes can add further multipliers and higher credit awards to the board.

The Team-Up Bonus Spins feature works in a similar way. By landing the full stack bonus symbol in reel 5 along with any other two full stack feature symbols, players can win 3 bonus spins. Much like the Team-Up Feature, a new board is created where multipliers, credits and extra spins can be awarded. The free spins bonus feature ends once there are no free spins remaining.

The Diamond Force online slot is a high volatility game. With games of this nature, players are likely to trigger wins less frequently, but the wins you do pick up tend to be bigger. While the maximum payout from the slot is $197,625, the relatively low maximum stake should be taken into account. That said, we would have liked to see a bigger maximum payout, given the slot's high volatility.

For a truly high volatility slot experience, why not check out NetEnt's Dead or Alive slot? This all-time classic is known as one of the most volatile slots ever made and is capable of paying out much bigger amounts at the top online casinos.

Is Diamond Force by Microgaming a Good Online Slot?

There's enough going on with the Diamond Force online slot that there should be something in it for everyone. The super-hero theme is one which will appeal to a lot of people, and the bonus games and features are things you won't find in just about any other slot game. This is a very easy game to play, which is a plus for beginners, though the high volatility perhaps leans it more towards experienced slot players.

It compares very favorably to other online slots in the same genre, like Playtech's Man of Steel slot, which can't compete with Diamond Force when it comes to gameplay features. You'll find these superhero slot games and many other top titles at our top online casinos.