Play Dragons Story For Free!
Bookmark It For Later 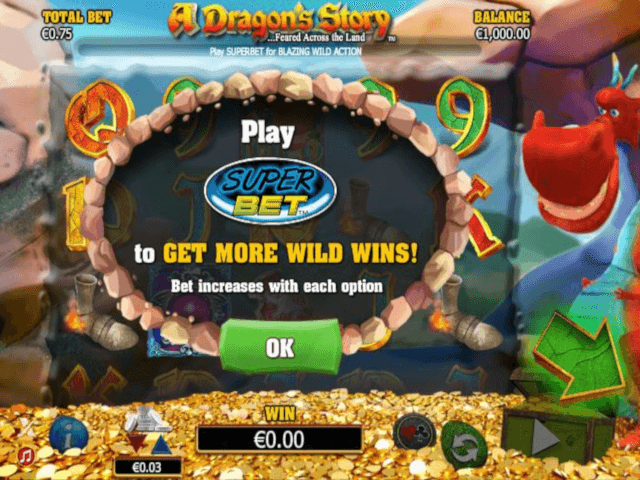 Ah, dragons and gold – it’s a love story as old as time itself. Drawing inspiration from the mythical creatures, NextGen’s A Dragon’s Story slot takes us back to medieval times when dragons ruled the land. A medium to high volatility game with a RTP of 95.22%, the A Dragon’s Story slot machine is ideal for newcomers who don’t want to spend much and are just looking for some fun at an online casino.

Apart from the 3D graphics, what makes the A Dragon’s Story slot stand out are its exciting features. Besides the Superbet, an additional wager that gives you more wild wins and the customary free spins, the slot features an enticing random bonus round that can be activated after any paid spin. The so-called Brave Sir William bonus gives you a chance to win a prize worth up to 1,250 times your stake in real money mode which makes the slot a hit with spinners. Available on desktop and mobile devices at many top online casinos, you can spin the reels of this 3D slot anywhere you go and win dragon-sized prizes.

Like most NextGen games, A Dragon’s Story isn’t a complicated slot. You get the usual layout which means 5 reels in 3 rows located in the middle of the screen (slightly to the left this time) with a 3D animated dragon called Ruff to the right. We’re not sure if it’s supposed to be scary – we find it kind of cute. Dragons are usually frightening (remember Smaug?), but it seems that Ruff doesn’t come from the same family.

Back to the topic at hand. The A Dragon’s Story slot machine hands out wins left to right. Payline wins are multiplied by the bet, while scatter wins are added to payline wins. The minimum bet is C$0.01 with the maximum a whopping C$625 (C$25 per payline). Max your bets out if you’re a high roller and you can win all the gold Ruff has stockpiled in his lair over the years (centuries sounds more appropriate).

Right beneath Ruff, there’s a cutesy little dragon. It’s not there for appearances only – it can randomly burn symbols and turn them into wilds. To increase the chances of this happening, you can use the Superbet feature. A common addition to NextGen slots, it makes an appearance in the A Dragon’s Story online slot as well. This feature acts as an additional wager which is indicated by the addition of two or four more little dragons in the area below the reels.

Max the Superbet out and you’ll get up to 5 little dragons which will burn even more symbols to wilds and raise your chances of winning. With this nifty feature, Ruff the Mighty Dragon and his little fire-breathing friends can bring you prizes beyond belief. See? He’s not that bent on destroying humans after all!

Ruff himself is the game’s wild with the scatter being an ornamented jewel. The other symbols include common card suit symbols and a knight’s shield. Land 5 jewels on a payline and you’ll win a prize worth 2,500 times your stake which is more than anyone’s hoping for. Although it doesn’t reinvent the wheel in terms of gameplay and prizes, the A Dragon’s Story NextGen slot is well-rewarding. Oh, and we forgot to mention that the slot is perfectly playable on mobile devices with controls adapted to match smaller screens.

NextGen’s A Dragon’s Story slot machine is ideal for beginners and experienced spinners as well. It’s not groundbreaking in terms of layout and design which is great news for newcomers and kind of disappointing for those who prefer more modern slot games. Of course, it’s not that it looks ugly – thanks to the excellent 3D graphics and aesthetics, the A Dragon’s Story online slot will appeal to most players.

With prizes worth up to 125,000 coins, there’s plenty of fun to be had. Your best bet is to maximize your bets (or go as high as you can), then spin the reels and hope for high-paying symbols to land on a payline. Five scatters or wilds will pay out nicely. If you combine that with a maxed out Superbet, your chances of winning top prizes will drastically increase.

If you get 3 or more jewels on the reels, you’ll activate 10 free spins. All the prizes in this bonus round are doubled, and the little dragons under the reels will use their fire-breathing ability to burn symbols into wilds more frequently. More wilds equal more frequent (and bigger) wins, making this round pretty lucrative.

The real star of the A Dragon’s Story slot machine, however, is the superb Brave Sir William bonus feature. Activated randomly on any paid spin, the feature pits brave Sir William against Ruff the Might Dragon. You choose the flame for Ruff to breathe and set the brave knight on fire with the possibility to earn prizes worth 50, 75, 100, 200 or up to 1,250 times your stake. Once on fire, Sir William will run around for a bit while you score some great wins. You know how dragons say – brave knights burn the brightest!

NextGen’s A Dragon’s Story online slot is a rewarding and well-designed slot that’s worth your time and money. Being of medium to high variance, you can expect smaller wins more often. Thanks to the Superbet feature and Ruff’s little helpers, you get the chance to win more frequently.

The two bonus rounds add even more incentive to the slot. During the free spins round, all wins are doubled which can be quite lucrative, while the Brave Sir William bonus feature is more entertaining. You can win prizes worth up to 1,250 times your stake in this bonus round so it can be nicely profitable as well.

With 243 ways to win and massive prizes in Ruff’s lair, A Dragon’s Story is a slot that deserves your undivided attention at one of the best online slots sites.