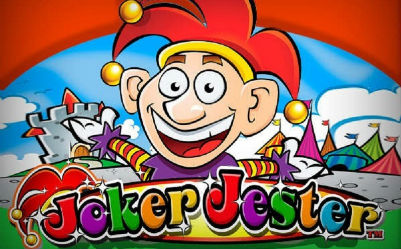 When it comes to the lowest-paying symbols, they’re a castle, lute, and the usual card suit symbols. Before you spin the reels, set your bet size – you can go between 0.01 and 25.00 per line. If you play at the maximum number of lines and maximum bet, you can go up to 500.00 total bet which is a serious sum for high rollers. If you like to keep your bankroll in control, lower the number of paylines and your bet.

The second bonus is called Barrel Bonus and is triggered by three Barrels on reels 3, 4, and 5. It’s a simple pick’em game where you choose a barrel to reveal a prize. Continue until the Jester appears – at that point, the feature ends.

A third special feature of the Joker Jester slot, the Jester Wild feature is awarded randomly after any spin in the base game. When it starts, the Jester will jump all over the reels and turn symbols to wilds. With so many wilds on the reels, pays will now be recalculated. At the same time, you also get a chance to trigger the Juggle Bonus or Barrel Bonus which is played after this feature ends. The feature is played at the triggering bet and lines and if pretty fun and rewarding if you ask us.

The slot has mid-high volatility, so you shouldn’t expect wins on each spin. Hit the spin button and good luck. If you’re really lucky, you’ll get 5 wilds on the reels to create stunning winning combinations. Landing the scatter or bonus symbols is also great. The scatter pays in any direction, with a prize worth 100 times your stake for five-of-a-kind.

The slot has a RTP of 96% and leans to the side of high volatility. With 20 betways and a maximum win of 1,000 coins, it might not be the richest video slot you'll find at a real money online slots site, but it’s not unrewarding either. Help the jester entertain the guest and you’ll be handsomely rewarded in the end.

Joker Jester may not be that entertaining in the base game, but you’ll see the Jester’s full-time show in the bonus rounds. The max prize might not be that big at 1,000 coins, but there’s plenty of fun watching the Jester jump around the reels and bringing you wild wins.

Why Joker Jester is a Great Slot to Play

The three special features alone are worth it. You might not get them that easy, but when the special symbols on the reels land, you’re in for a world of fun. The Barrel Bonus lets you pick amazing prizes, while the Juggle Bonus puts the Jester through his motions. Seeing the Jester juggle eggs which he might drop at any point is pure fun, and wait until you reveal the golden egg.

The Jester Wild feature that can be awarded randomly after any spin adds further excitement to this carnival of fun. It’s not the most graphically advanced or high-paying slot we’ve played, but it offers a carnival of fun. And gambling should be fun before everything else. Join in on that fun at one of our many top online casinos.