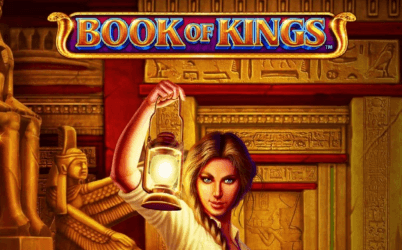 The Giza plateau overlooking the Pyramids is where the Book of Kings pokie by Playtech is set. Ancient Egypt is definitely an oversaturated theme in pokies, but what matters most is the gameplay. With 96.63% RTP and a 15,000x max win does Book of Kings knock it out of the park? Find out in our full review and learn about free spins and bonuses below!

Play Book of Kings For Free!
Bookmark It For Later 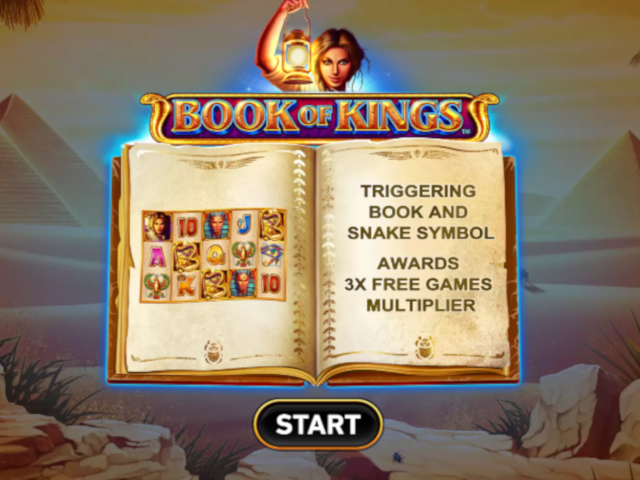 Tombs and temples await pokies fans in Book of Kings by Playtech. In this high variance game you’ll learn the story of a young explorer searching far and wide for boundless riches among the sarcophagi of Giza. On the reels you’ll find symbols such as the explorer herself, an ancient Tutankhamun pharaoh lookalike, the heraldic eagle symbol of Egypt and of course, the Book of Kings itself!

There is a visual theme here that, if you’re a regular pokies player, you’ll be extremely familiar with. Ancient Egypt is without a doubt the most popular setting for pokie games both online and offline. That should not take anything away from Playtech’s effort with Book of Kings though; the game looks and sounds fantastic and the gameplay is top notch.

There are 10 paylines to be struck in Book of Kings. Couple that with the higher-than-average return to player percentage of 96.63% and the high variance and you can expect a great gameplay experience. The wins in Book of Kings should, in theory, come at you slower than in other pokies - but expect each win amount to be on the higher side.

If you’ve played a Playtech pokie game before then the Book of Kings controls should be fairly intuitive. On desktop the controls are positioned along the bottom third of the screen. When the game loads you’ll see a small ‘i’ symbol on the bottom left which will show you what each symbol means and the payouts.

One of the disappointing aspects of the Book of Kings controls is the autoplay function. On most modern online pokie titles you can set stop conditions when autoplaying - meaning that if you win or lose a certain amount the reels will immediately stop spinning. In Book of Kings there are only two types of stop conditions available.

One is the ‘until feature’ which means the game will only stop when you hit a free spins round. Another is setting the amount of spins you want to play. The problem with both of these stop conditions is that they don’t take into account potential wins or losses - so if you aren’t monitoring the game screen closely you might not notice any dramatic changes in your balance. For this reason we would advise foregoing the autoplay function in Book of Kings.

That gripe aside, the Book of Kings pokie controls work well. It is available to play on both Android and iOS and there are no noticeable differences in how the game runs or its visual quality between devices.

Book of Kings isn’t packed to the rafter with free spins and bonus features. However the two main features that exist in the pokie can pack a punch when landed:

How Do Book of Kings Wilds Work?

The book symbol (without the snake!) is the most useful wild in Book of Kings. It is a wild that will substitute for other symbols making a win possible or extending a win that’s already landed. Get three of these symbols and you will also activate the free spins feature - albeit minus the 3x win multiplier.

The maximum win you can achieve in Book of Kings is 15,000x your original stake. This is done by landing an expanding female explorer symbol across every reel during the advanced free spins round. This is normally 5000x but with the 3x multiplier attached the win becomes colossal!

Book of Kings has an RTP of 96.63%. This means that 96.63% of the total amount put into the machine is paid back to players, with the remaining 3.37% going to the casino as house edge. Compared to other pokie games this is an above-standard RTP amount. The game is high volatility which means that wins will come less frequently but generally at higher amounts.

Book of Kings is a fun game to play. The Ancient Egypt theme has been done to death by pokie developers and is definitely an oversaturated space. That being said, Playtech have done a great job with this game, providing a balanced and exciting experience for all levels of player. While the theme is so-so the gameplay is great and at the end of the day that’s what matters.

If you would like to play Book of Kings now check the game out at one of our recommended online pokies sites!

There are a multitude of different Ancient Egypt pokie games available to play at our recommended casinos. If you enjoy Book of Kings you may want to consider one of the following to try next: