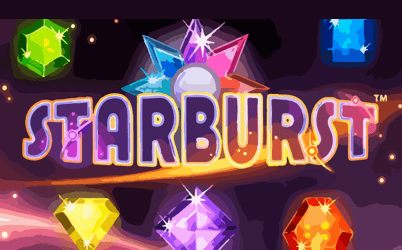 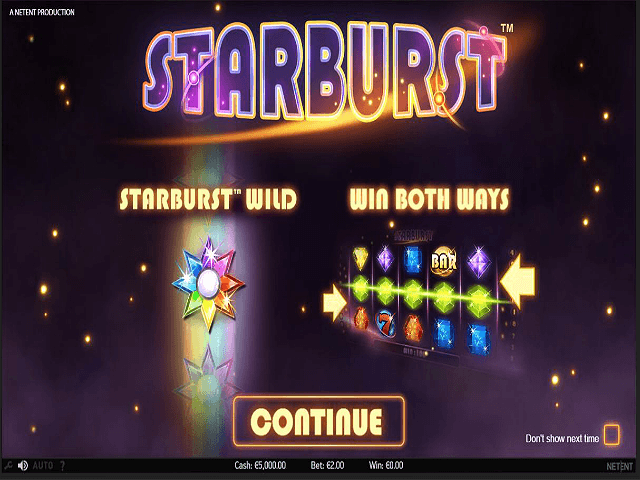 Play Free Demo
Version Directly in Your Browser
Play Starburst For Free!
Bookmark It For Later

Not only the most popular online pokie game at NetEnt Casinos, the famous Starburst pokie machine by NetEnt is one of the most widely played pokies in the world on desktop, tablet and mobile devices. Its vibrant 3D effects, cool soundtrack and space theme have wide appeal to a variety of players and even though Starburst is strictly a low volatility game – you can still win up to 50,000 in cash on Starburst from just one spin if you hit it very lucky at a top real money site. With exciting reel re-spins, stacked wild reels and each way wins on this 5-reel pokie, it’s not hard to see why Starburst is so adored by players at all the best online casinos.

How to Play the Starburst Online Pokie

If you are new to video pokies don’t be concerned. Despite the modern design Starburst is one of the easiest pokies to setup and play. Simply select a bet level and coin level to determine how many game coins you will be playing per spin which you will see on the super clear display next to the controls. Minimum total bet is just 0.10 credits on the Starburst pokie machine and the maximum is a healthy 100.00 credits, appealing to a wide variety of bankrolls.

Wins are calculated as multipliers of the coins you bet and there’s only seven winning symbols to try and remember. At minimum bet the max win on the pokie will be 5000 in cash on a single spin and at max bet it will be an astronomical 50,000 win. There are 10 fixed pay-lines in play to help this happen and you can clearly see how these work by hovering over them at the edge of the screen to illuminate them or by clicking on the combination pay-table and instructions menu on mobile. One unusual feature of the Starburst pokie game is that wins pay out for sequences formed both left to right and in reverse on the screen – increasing the hit ratio of the pokie much more than you would normally expect from a 10 payline game.

For mobile users there’s a special NetEnt ‘Touch’ version of the game that will load on all iOS and Android devices at recommended mobile casinos. It functions just the same way as the desktop pokie – you lose nothing by playing mobile on this game which is why it is one of the most played mobile pokies. Auto play and quick spin are both in the options menu for those of us who like to just sit back and watch the reel action or, you can adjust your strategy spin by spin.

Whilst the dazzling gems spin around the reels on the Starburst pokie machine, you are really hoping for one of two things to happen. Your first, but very rare opportunity to win on the game is for one of the high value symbols to land on the reels in a four or five of a kind combination. Unlike the other symbols which are all gemstones, the classic fruit machine symbols Bar and ‘7’ icons are very different in design and you’ll get that little thrill of anticipation when they appear hopefully, on a winning payline. Don’t be dismayed if they don’t land on reel one – if they hit on the remaining reels the pokie will still pay you a big combination thanks to the ‘each way plays’ or ‘all ways pay’ feature.

By far the most common way to grab a big win on the Starburst pokie comes through the wild symbols – the only icon not to offer an individual payout. Instead, if a Starburst wild appears on any of the middle three reels, it expands and substitutes for all existing symbols on the reel to help you connect gaps in a payline. Further to this, the Starburst wild also triggers a free reel re-spin. This is a novel way to integrate a free spins bonus round in the game and for each consecutive wild you get – the reels will re-spin again up to a maximum of three times. A full set of wilds across the middle three reels is rare but, when it happens, it’s almost always a sizeable win.

Starburst is a low volatility pokie, meaning players are more likely to pick up smaller, more frequent wins. The 96.01% RTP is exactly in line with what modern online pokie games offer, while the maximum payout of 50,000 is relatively generous for a pokie game of its kind. While this is a little less than other NetEnt titles, such as Gonzo's Quest (over 90,000 max payout), there's more than enough in Starburst to keep players happy.

NetEnt designed the Starburst pokie to appeal to a very broad segment of online pokies players. For those used to the old school Vegas slots this is a great crossover into the modern 3D video pokie world whether you are playing for free or for real money. It’s entertaining enough and the occasional big win can be had however the high hit ratio makes that the exception rather than the rule. Truly Starburst is best for low stakes players who want low variance games to preserve their bankroll for a longer play time or to play through the occasional batch of free spins given to them by a casino as a reward.

Those players who want an entertaining pokie with a little more risk whilst retaining the fun can easily look elsewhere amongst NetEnt’s own catalogue. Jack Hammer, Jack and the Beanstalk or even the notoriously high volatility Dead or Alive pokie are all contenders for games which look and sound great but have much higher winning potential if you can hold your nerve. Don’t forget to check out our selection of top-ranked online casinos, many of them have welcome offers which include extra bonus spins on the Starburst pokie as part of their new player sign-up bonus and many give spins out frequently as player rewards.

What is the maximum payout of Starburst online pokie?

The most you can win when landing the jackpot at Starburst is 5,000x your stake, with the maximum stake being NZ$100.00.

Who makes the Starburst pokie game?

The return to player percentage for Starburst is 96.01% and it is a low volatility pokie.

Starburst online pokie game was originally released back in 2012.

Starburst is one of the most popular pokie games on the market. With a fair RTP of over 96%, generous jackpots and low volatility ensuring frequent wins for pokie players at the top casinos.

What pokie games are similar to Starburst?

In terms of other top NetEnt options on the market, you can check out Jack Hammer, Jack and the Beanstalk or even the notoriously high volatility Dead or Alive pokie – all are games which look and sound great when played at the best online casinos.