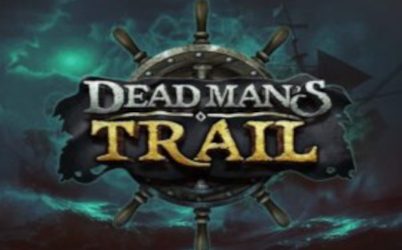 Relax Gaming take you on a pirate-themed adventure with the Dead Man’s Trail online pokie. This desktop and mobile game features detailed images over a 5x4 symbol grid, and it’s filled with exciting extras.

Coin multipliers can help out in the base games, and there’s a bonus trail round where you can pick up win multipliers and cash awards as you explore a treasure island. Dead Man’s Trail is a high volatility game with generous returns of 96.29%, and a huge potential maximum win worth 50,000x your bet.

How to Play the Dead Man’s Trail Pokie Machine

A motley crew of pirates appear on the reels of the Dead Man’s Trail Pokie Games, along with playing card symbols a black ship, and golden ‘W’ wild icon. Rope surrounds the 5 reels and the whole game is bathed in the moonlight shining down on a Caribbean island. Mist rolls past a rustic building to one side, and a ship on the other, while a haunting tune is the perfect match to this eerie setting.

Dead Man’s Trail is a 40-line game where you win with enough examples of the same symbol across lines, starting from the left. Tap the small pile of coins on the control panel and you see a bet range of 0.10 to a relatively low 20.00 on each spin. The double arrows above this will trigger a fast-play option and Auto mode starts when you press the arrow in a circle below.

Take a look at the paytable to see how much each symbol pays, and for more information on the fantastic features. It’s reached with a click on the 3 lines at the bottom of the controls, and you’ll discover that the wild is the most valuable, worth up to 60x your bet.

What is the Trail feature of the Dead Man’s Trail pokie machine?

This is the main bonus feature of the Dead Man’s Trail online pokie, and it plays out across a line of tiles in an island setting. You move across the tiles collecting cash awards, or multiplying and combining values, until you land on a red skull section and the round ends.

How many paylines cross the reels of the Dead Man’s Trail online pokie?

The Dead Man’s Trail pokie is a game with 40 paylines. It means there are 40 fixed pathways across the 5 reels, and to win, you need to land 3, 4, or 5 examples of the same symbol across a payline from the left.

What is the minimum bet on each spin of the Dead Man’s Trail pokies game?

You can spin the reels of the Dead Man’s Trail pokie for as little as 0.20, or 0.005 on each line. There are several options between this level and the maximum bet of 20.00, and it’s a very easy game to play, with just a couple of clicks needed to get started.

How volatile is the Dead Man’s Trail pokie?

This is a highly volatile game, so compared to others, the Dead Man’s Trail pokie pays relatively high prizes, but less often. It’s an exciting format, but you need to choose a bet level that can take a few hits in a row.

Can I play the Dead Man’s Trail pokies game on a mobile?

Yes, you can. The Dead Man’s Trail pokie works perfectly on iOS, Windows, and Android-powered mobile phones and tablet computers.

What is the best Dead Man’s Trail pokie app?

Check out our guide to the best apps that you can download to a mobile device. These give you instant access to recommended casinos that carry the Dead Man’s Trail pokie and other high-quality games.

What symbols does the Dead Man’s Trail pokie use?

The Dead Man’s Trail online pokie is themed around pirates and stars 4 members of the crew across the reels. Playing card emblems also appear, along with a golden wild symbol and a black pirate ship which unlocks the bonus feature.

Are there any games similar to the Dead Man’s Trail pokie?

For a game with a similar style to the Dead Man’s Trail pokie look no further than Pirates Plenty Megaways by Red Tiger, or Adventures of Dubloon Island by Microgaming. The Money Train 2 pokie machine has very similar gameplay features, but a Wild West theme.

The Dead Man’s Trail pokie comes from Relax Gaming. Other hugely popular titles in their range include Marching Legions, Hellcatraz, Temple Tumble, and the Money Train 2 pokie mentioned above.

When was the Dead Man’s Trail online pokie released?