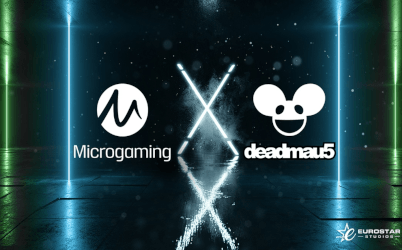 Based on the famous Canadian DJ, the Deadmau5 online pokie is a highly energetic game from Microgaming and Eurostar Studios that plays out over 5 reels with 243 winning ways. Like many Microgaming pokies, you benefit from a Rolling Reels mechanism that can lead to win after win. This high volatility game is designed for play on PCs and mobiles, and comes with average returns of 95.22%. You can win up to 2100x your stake, which adds up to a prize of 252,000.00 if you have the maximum bet on the triggering spin.

Fans of Deadmau5 will enjoy the various tracks that play out as the reels spin, along with the graphics that include his cartoon mouse logo, some realistic images of glamourous women dancing, and playing card icons. The Deadmau5 pokies game isn’t just for his fans though, as it comes with plenty of exciting gameplay and features.

Winning symbols vanish and new ones can create further wins. Stacked wild symbol can help to complete combinations across the 5 reels and 243 ways to win, and during the free games, you can multiply prizes many times over.

The Deadmau5 pokie machine is available at the top mobile casinos with iOS, Android, and Windows mobiles, as well as PCs, and offers a wide range of stakes to suit all players.

How to Play the Deadmau5 Pokies Game

With a bet range running from as little as 0.20 to as much as 120.00 per spin, there’s a great spread of options. The Deadmau5 pokie machine is easy to set up, with a click on the image of a pile of coins opening up the controls. You can slide a tab to change stakes, or select from 6 preset options.

It comes with an automatic spins mode that runs for up to 50 consecutive games at any of the highest rated online pokies sites, and the little bolt of lightning button triggers a fast spin option.

All of the control options are the same across desktop and mobile versions, so there’s no need to compromise when you play the Deadmau5 pokies game on any device.

Open the paytable, via the 3 little lines to the left of the controls, and you’ll see that playing card suit symbols return up to 2.5x your bet when seen on adjacent reels from the left side. The dancing women are the most valuable and worth up to 5x for the same patterns.

Any symbols in a winning combination will vanish, leaving gaps for others to drop into, as new ones appear from above the grid. This Rolling Reels system can lead to new wins, and further Rolls, that carry on until no new wins form.

The Deadmau5 glitterball logo is a wild symbol that acts as others if needed. Wilds can be stacked on reels, and in the randomly triggered Drop the Wild feature, all 3 middle reels fill with this symbol, creating a guaranteed wins, followed by Rolling Reels.

There’s a free spins bonus round awarded when 3, 4, or 5 crazy mouse scatter symbols land at once. Depending on the number of scatters, you get wins of 5x, 50x, or 250x the total bet, followed by 15, 20, or 25 free games. A multiplier trail appears above the reels, and any wins in a series of Rolling Reels during the free game will be boosted by 2x, 3x, 4x, 5x, then 10x.

With the maximum multiplier in place, you can win 2100x the total bet, and if you have 120.00 staked, that’s a nice win of 252,000.00 heading your way. The Deadmau5 online pokie is a highly volatile game, so expect to see longish gaps between wins, but relatively high average prizes. The return to players percentage is 95.22%.

Fans will no doubt be delighted to see a game themed around one of the top DJs in the world. This is a game with some excellent features, with a big winning potential coming from the Rolling Reels, Drop the Wild bonus, and free games with rising multipliers.

The average returns are OK, but not exceptional, and the high volatility gameplay isn’t for everyone, but if you’re happy with this format, then the Deadmau5 pokie machine is sure to provide thrills. It’s available at some of the best online casinos carrying the Microsoft range and we feature the ones with the best casino bonuses right here.